We continue our countdown of the best individual seasons in Raptors history with a look at a very underrated season from Jose Calderon.

Jose Calderon amassed a career-high 10.2 win shares during his 2007-08 season with the Toronto Raptors.

Calderon's campaign ranking this high might be a surprise to some people, considering he wasn’t even the the undisputed starting point guard on the team that year with T.J. Ford on the team. Calderon did play in all 82 games for the Raps that season, but only started in 56 of them, capping an opportunity to place even higher on this list.

There were several seasons during Calderon's tenure with the Raptors when he wasn't considered the clear-cut starter from the outset, but he always edged his way in.

Calderon - the consummate professional - always promoted team over his individual success, but others saw how much he deserved to be in the conversation as a starter. Ford himself had this to say during the 2007-08 season regarding Calderon. Via ESPN's Scoop Jackson:

"He's played so well this season," Ford said, his face lighting up when he talks about Calderon. "It has been a big year for him, and he showed the whole NBA that he's capable of being a starter in this league. I really respect what he's been able to do this year. I think he earned everything he's received. And I think that's what people don't see, because if [respect] didn't exist, you'd see a conflict between me and him. But there is no conflict. We support one another. Now everyone gets mad or upset during the course of a game, but that's just part of it, part of wanting to be the best and not settling."

Regardless of whether he was starting or coming off the bench that year, Calderon was a steady force for the Raps all season long. He put up 32 double-digit assist games, including 25 double-doubles in points and assists. He finished the season with averages of 11.2 points, 8.3 assists, and 1.1 steals per game, including 13.0 points, 9.1 assists, and 1.2 steals in 56 starts.

The scoring makes his stat line seem modest, but the 8.3 assists to a mere 1.5 turnovers per game produced a stellar assist-to-turnover ratio of 5.38. That number led the league and still represents a career high for Calderon. To truly appreciate what Calderon did, his assist-to-turnover ratio that season remains the best posted by any player in the NBA since John Paxson’s 5.48 for the 1991-92 Chicago Bulls. Even Chris Paul has never hit that mark, topping out at 4.57 last season.

He joined Larry Bird (twice), Mark Price, Reggie Miller, Steve Kerr, Steve Nash (x4), Dirk Nowitzki, and Kevin Durant as the only players to ever accomplish the amazing feat. Calderon and Kerr were the only ones to ever do it without ever being named to an All-Star team.

Just looking at Calderon's shot chart from that season shows just how unstoppable he was from mid-range and beyond the three-point arc. Via Nylon Calculus: 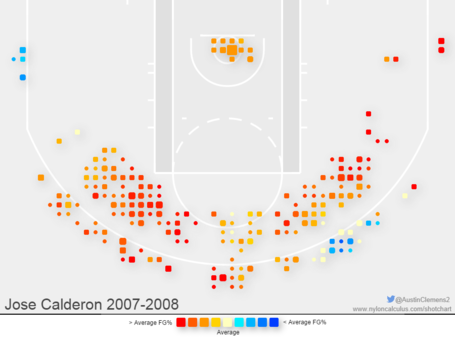 We might not remember the 2007-08 season for any team accomplishments, but Chris Bosh and Jose Calderon put up two of the best individual statistical seasons in Raptors history. While Bosh’s flashy scoring and rebounding earned him an All-Star bid and plenty of attention as Toronto’s post-Vince Carter alpha dog, Calderon’s season of quietly superb passing and historically efficient shooting might have been even slightly better. It is arguably the most underrated campaign in the team’s 19 years.

For more insight on Calderon's season particularly how he viewed the position battle with Ford, check out his exit interview from 2007-08:

That off-season, Calderon would re-sign with the Raptors. Ford would be shipped to Indiana in a trade for Jermaine O'Neal.

What does everyone think about Calderon's 2007-08 season making our list of the best individual seasons in Raptors history?