How Are The Raptors Positioned For The Summer Of 2015?

Daniel Hackett takes a look at how the team is positioned from a salary cap standpoint for next summer.

Share All sharing options for: How Are The Raptors Positioned For The Summer Of 2015?

After taking a thorough look back at the Raptors off-season and how it unfolded, we move on and examine the future. Today, we'll look at the summer of 2015.

Again, Shamsports.com is the place to go for any salary cap information. As well, CBAfaq.com is the site to check out for answers to any of your salary cap questions. Of course, feel free to ask me anything in regards to the cap in the comments below and I'll do my best to answer.

Now, let's take a look at how the Raptors are positioned for next summer.

How Things Stand For Next Summer

Right now, the Raptors project to have cap space to sign a major free agent next summer. Here's how their salary cap situation will look, assuming Will Cherry gets waived next summer to clear his unguaranteed salary off the books: 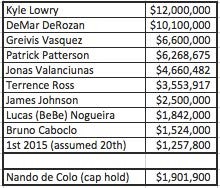 With the above roster and all free agents released, the Raptors will stand at $49.6 million, $51 million if they keep Nando de Colo's rights. The cap for the 2015 season is currently projected at $66.5 million.

The Raptors will have ten players under contract including their draft pick in 2015. This is not counting de Colo, who may or may not ever come back over - if the Raptors let him go, they will have about $16.9 million in cap room next summer.

So, given the maximum roster of 15 players, the team could add up to five players next year. Two of them will be bench players who will be signed with the minimum exception - which can be used after cap space is used - so they won't factor into our calculation of cap space.

Depending on who the Raptors sign next summer and to what terms, it will go a long way to determining their flexibility for the summer of 2016, where a huge increase in cap space is expected. This will be explained in my next article which dives in-depth into the 2016 off-season, but for now, as we look at free agent possibilities for next summer, just remember that there is most likely going to be a lot of money available to toss at free agents in two years time.

Since agents are expecting a big cap boom in 2016, they may encourage players to take one year deals next summer in order to position themselves for a bigger payday in a year's time. But that path is still very risky for most players and just because the cap is set to make a huge jump in 2016, it doesn't mean there won't be any lucrative long-term deals that make sense for players to accept next summer. Of course, any free agent who is even close to commanding a max level contract on the market will likely command a max deal, because in theory, if they wait until 2016, it's more than likely teams with cap room will hand out similar dollar amounts to these players.

The goal for 2015 should be to secure top level talent before the summer of 2016, where free agency is all set to become a crazy free-for-all with teams throwing out money left and right, and likely inflating the value of some players. So, you want to lock in players that you like for the long term in 2015. With Amir Johnson set to hit free agency next summer, the main position of need for the Raptors will be the power forward position, and there are several options that are intriguing, even though a few of them will be hard to acquire.

There is Tristan Thompson, a young Canadian power forward with room to grow. He's going to get paid, but in Cleveland he'll be stuck behind Kevin Love on the depth chart. There could be a fit in Toronto if Masai Ujiri thinks Thompson can improve his game. But Thompson will be a restricted free agent which makes things a bit tricky.

Another restricted free agent of interest would be Kenneth Faried of the Denver Nuggets. The power forward, who is currently on Team USA at the FIBA World Cup, would provide energy at the power forward position and could create havoc on the boards if paired up with Jonas Valanciunas. There's the potential for Faried to grow into a player similar to what Amir Johnson is now, with higher rebounding upside.

David West of the Indiana Pacers has a player option for next season. If he opts for free agency, Ujiri could target him to add as a veteran presence. He would likely come as a reasonably priced back-up, with upside to make a huge impact off the bench.

A personal favorite candidate of mine is Paul Millsap. He can stretch the floor, rebounds well and is quick enough to defend the pick and roll. Millsap is one of the most underpaid players in the league right now, so there's going to be some stiff competition and a hefty price to pay to sign him next summer.

Two other players who could potentially be available are Kevin Love and LaMarcus Aldridge. But more than likely they will re-sign with their respective teams.

Of course, with the difficulty of acquiring a restricted free agent and the reality that some of these players will sign extensions rather than hitting the market, not all of the listed players will be available. Ideally, the Raptors target a top level free agent and can use the $16.9 million of available cap space on that player. Failing that, they can still land two mid-tier free agents.

Assuming the team uses the $16.9 million to sign one or two players and uses the room mid-level exception (this would be for up to two years at around $2.9 million per year) or the minimum exception to sign a role player, we can take an early look at what the summer of 2016 could look like for the Raptors by making some assumptions.

We'll tackle that next week.

In the meantime, what do you think are realistic or ideal free agents the Raptors should target next summer?