Examining the candidates for the final roster spot.

Share All sharing options for: 20Q's: Who Will Get The 15th Spot On The Roster?

Leading up to the start of the 2014-15 season, we'll be asking 20 questions about the team. Some of them more serious than others. All of them hopefully interesting or at least enough to spark a meaningful discussion. After hours of brainstorming, we came up with a perfect name for these articles, we're calling them 20Q's.

So, from a financial standpoint, Stiemsma would stand to have an advantage heading into camp, but below we take a look at which of these three players would be the best fit on the roster:

Stiemsma’s most efficient campaign was his rookie year in Boston where he posted solid per 36 minutes averages for a backup center, including a remarkable block rate of 4.0. However, that rate decreased to 2.0 last season with the Pelicans despite playing a career-high 18.3 minutes per game. Stiemsma’s turnover percentage skyrocketed to 24.4%, a statistic that ranked him 13th worst among all players who played 20+ games, and often found himself in foul trouble, averaging six fouls per 36 minutes.

Stiemsma’s on/off court production reveals that he slightly improves his team’s defense but drastically worsens the offense in the process, providing a poor net rating altogether.

Judging by his recent performance, it’s hard to suggest that Stiemsma can provide quality minutes as a backup to Jonas Valanciunas.

Will Cherry is known for being a tenacious on-ball defender but his addition would leave the Raptors relying on another inexperienced rookie point guard following last season's unsuccessful Dwight Buycks experiment.

While he has produced mediocre three-point shooting percentages, his assist-to-turnover ratio is impressive, posting a rate of 2.68 in the D-League that improved to 3.0 in five Summer League games. This shows the dichotomy between Buycks and Cherry, as Buycks was a turnover machine in the Summer League and averaged 2.7 turnovers per-36-mins in Toronto. With his skill set, Cherry can support the roster as an additional ball distributor and pesky defender.

Jordan Hamilton is a respectable three-point shooter, an athletic wing defender, and a great defensive rebounder. His defensive rebounding percentage with Denver was on par with Paul George and Nicolas Batum.

While his statistics aren’t highly efficient, Hamilton is wise with his shot selection by taking plenty of high percentage shots: mostly threes and lay-ups, and few mid-range jumpers. Although he is terrific from the corner pockets, Hamilton will have to ramp up his effectiveness from the top of the arc. 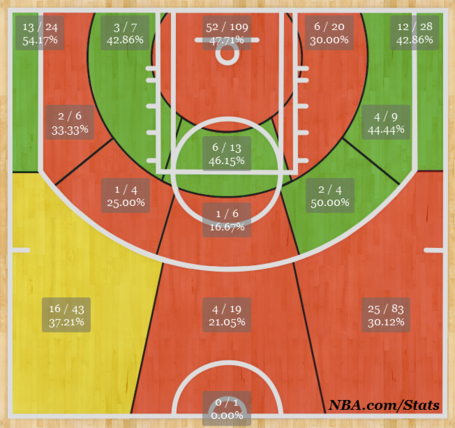 Despite being fairly one-dimensional offensively, Hamilton does possess decent defensive skills with an ability to guard multiple positions thanks to his 6’10" wingspan.

Among the candidates, I would keep Hamilton as the third string shooting guard. Though he’s a natural small forward, he can play the two-guard and even be utilized as a stretch-four in small-ball lineups if necessary due to his defensive rebounding prowess and defensive versatility. However, with the implication of Stiemsma's fully guaranteed contract, it is far more likely that the Raptors will select him instead as the 15th and final player on the roster.