Patrick Patterson has developed into a key contributor for the Toronto Raptors, but nothing he does on the basketball court is quite as important as being 6'9" and making jump shots.

Here's another installment of an occasionally regular column at the site called "Numeric Narratives" in which Ian Levy drops by to provide some insight about the Raptors. If you're not familiar with Ian's work, he is the editor-in-chief of Nylon Calculus, and a regular contributor to Hardwood Paroxysm and Bleacher Report. He's also contributed at FiveThirtyEight.

On one hand It seems silly to attribute so much of a player's value to simply being tall and being able to make outside shots. But in Patterson's case, it really represents the foundation of his NBA niche. He is unremarkable as a rebounder and less-than-satisfactory as a defender. He has no post game to speak of and doesn't really create offense for his teammates. His turnover percentage is very low but that's really a function of his primary offensive role—catching the ball and shooting it, usually in quick succession.

In fact, more than half of Patterson's field goal attempts last season were of the catch-and-shoot variety, according to the NBA's SportVU Player Tracking statistics, and roughly one out of every three shots he took last season was a three-pointer. Although he has strong perimeter tendencies, his outside shooting doesn't quite reach the level of "deadly." He shot 36.4 percent on three-pointers last season and you can see from his Nylon Calculus shot chart that his three-point efficiency is fairly localized to two regions—the left corner and the right wing. 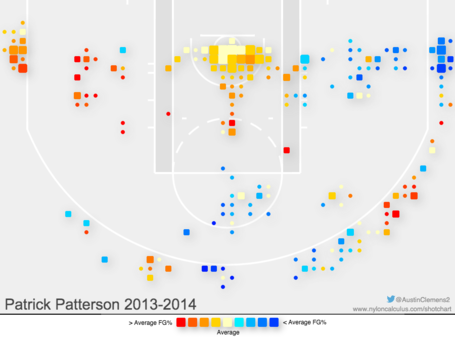 However, somewhat counterintuitively, Patterson's tendencies in this regard are almost as important as his actual performance. Patterson's average shot distance last season was 14.6 feet. Every one of the Raptors' other rotation bigs—Amir Johnson, Jonas Valanciunas, Chuck Hayes, Tyler Hansbrough—had an average shot distance of less than eight feet. On last season's roster, and really next year's roster as it stands right now, Patterson is unique in his ability to space the floor from a front court position.

Towards the end of last season, Justin Willard did some research on positions, shooting and spacing for the RAPM-focused site, Got Buckets. He found that having more shooters on the floor increased the overall performance of a lineup, beyond what we would expect from modeling simply on each player's offensive performance. Most interestingly, he found that the effect was concentrated when the shooting came from a big man:

All players, regardless of position, help the offense through spacing the floor, but position/height can make this more valuable. For the height input at each position, the average height is used, taken from previous work of mine. According to the regression model, three-point shooting is twice as valuable from a center compared to a point guard and roughly two-thirds more valuable for big men than perimeter players, again reinforcing the results from the other methods.

This benefit would seem to play out in a few different ways. A big man who is dangerous from the perimeter theoretically pulls a big defender away from and allows for more driving lanes and interior activity by other players. This is especially crucial for a player like DeMar DeRozan who is not much of an outside shooter himself, relying on penetration for efficiency. Last season DeRozan shot 47.0 percent from the field while Patterson was on the floor, 40.9 percent when Patterson was one the bench. He always was able to get to the restricted area for about five percent more of his total shot attempts when Patterson was in the game.

You can see from this TeamSPACE chart (created by Matt D'Anna) how clogged the area around the basket was when both Valanciunas and Johnson were in the game. 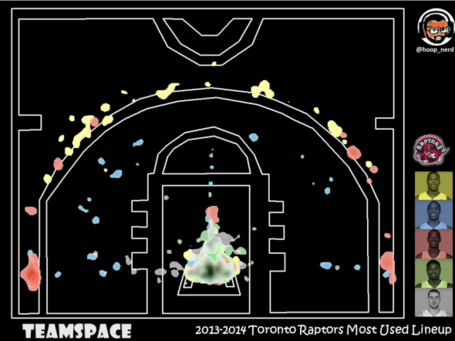 Although Valanciunas and Johnson are much better players than Patterson on an individual level, the overlap between their skill sets and offensive areas of activity made them a much less effective combination than when either was paired with Patterson. We are looking at much smaller samples sizes but the Raptors were significantly better off when the Valanciunas-Johnson combination was split up by Patterson.

To put that point differential of +13.6 in perspective, it would have led the league by a healthy margin last season. Again, it came in a small sample but I don't think it's a coincidence that the Raptors' best front court combination also happened to include their two best front court shooters. Altogether the Raptors' offense was 3.8 points per 100 possessions better with Patterson on the floor last season. That number is obviously influenced by a number of factors, but it hints at a pretty impressive offensive impact for a player who finished eighth on the team in field goal attempts per game and had a Usage Rate of just 17.4%.

In the end, Patterson is a great example of the limitations of context-less box scores statistics as a means of player evaluation. By almost any raw number, his performance is fairly prosaic. But if you place his performance within the context of the position he plays and the way the rest of this roster is built, it suddenly takes on a new level of importance.