Daniel Hackett takes a look at how the team is positioned from a salary cap standpoint for the summer of 2016.

Share All sharing options for: A Very Early Look At The Raptors In The Summer Of 2016

After taking a look ahead at how the Raptors are positioned for next off-season, today we focus on the summer of 2016.

Again, Shamsports.com is the place to go for any salary cap information. As well, CBAfaq.com is the site to check out for answers to any of your salary cap questions. Of course, feel free to ask me anything in regards to the cap in the comments below and I'll do my best to answer.

A Tale of Two Television Deals

So, we have to start out with a quick run down of how the cap system works.

The NBA brings in huge amounts of revenue every year (literally billions of dollars). That revenue is split evenly 50-50 between the players and owners. The mechanism for getting that 50 percent to the players is the salary cap.

By setting the cap at a certain value, teams will spend a certain amount (historically slightly more than the cap amount on average) so the NBA projects how much revenue it is likely to bring in that season, and uses that to determine the cap level.

Quick math note for those who want the details. The total revenue is a) divided by two, b) then about 8 percent is subtracted and set aside for player benefits, c) then the revenue number is divided by 30 to give a per-team expected salary, d) then that number is reduced by 10.5 percent (the amount a team, on average, will exceed the cap).

The final number is your salary cap amount.

So, you can see that revenue directly relates to the cap level. The non-TV deal revenue (ticket sales, merchandise, ad revenue, corporate sponsors) typically increases fairly steadily, so our projections use an increase of 4.5 percent per year. Those revenues account for about 75 percent of the total revenue lately. Last year, there was $4.5 billion of total revenue, of which $3.6 billion came from those standard revenue sources.

The TV deal is treated separately, since it is agreed to ahead of time and is the same revenue every year. The current deal is $930 million per year. It will be $930 million next year as well, and the increase in the cap will be driven entirely by the 4.5 percent increase in standard revenues. That's where the projected increase from $63 million (this year's cap) to $66.5 million (next year's projected cap) comes from.

What can cause that slow progression of the salary cap to go a little haywire is when that TV revenue is not the same year to year. That happens when a new deal is up for negotiation. So, it's pretty important to mention that the current television deal runs out after the 2015-16 season.

Lately, leaks of the negotiations have suggested that the NBA is looking to more than double their current TV deal. Assuming the reports are accurate, that means increasing TV revenue from $930 million to over $2 billion. That's a big jump in revenue.

That huge jump translates to a cap level near $85 million, and a tax threshold over $100 million. To show how crazy that jump is, here are the last couple and next few cap and tax levels by season. The future seasons are projected, all numbers approximate. 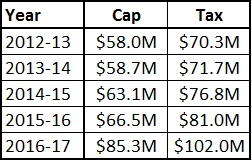 The conclusion here: there's going to be a lot of cap room for teams to operate with in the summer of 2016.

The league may try to implement some cap changes to smooth out that jump, but it is not clear that they will succeed (it's a careful balancing act with revenue coming in and players getting a piece of that revenue), and even more unclear how they will try to do so.  Add in that they've never smoothed big jumps in the cap before, and we'll move ahead assuming the large jump outlined above will happen.

What does this mean for the Raptors?

Let's start by assuming the Raptors do absolutely nothing next summer, and we can work backwards from there. 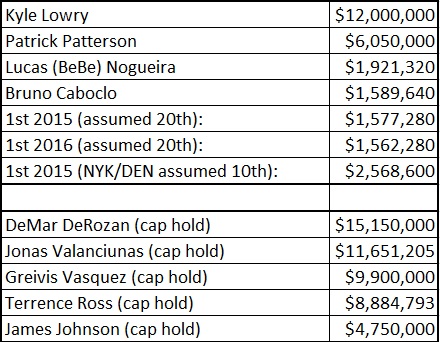 With the above roster and all free agents released, the Raptors will stand at $29.8 million. With cap holds, the total is closer to $78 million. The cap is projected at $85.3 million, the tax at $102.0 million.

Now, there's a lot of guess work to be done this far in the future. Above I have assumed that DeMar DeRozan opts out of his player option year in 2016 and hits free agency early.

If DeRozan makes another All-Star team or two in the next couple seasons, he'll probably be looking for a lot more than $15 million per season. His maximum salary will be about $24 million, so he'll probably demand close to that. Remember, the market will be saturated with cap room everywhere, everyone is getting overpaid that summer.

The good news is, we can leave him until last because only his cap hold counts against the cap until he signs or leaves.

In the meantime, let's assume Jonas Valanciunas and Terrence Ross are extended for roughly their cap holds. That might be an optimistic assumption, but in all likelihood they will sign extensions next summer, before the big cap boom the year after, so perhaps they can be had for those more reasonable deals.

At that point, we are looking at $63.0 million in committed salary, including DeRozan's cap hold. So then the Raptors have two choices: use the $22.3 million in space they have to offer a near-maximum contract to a player that summer, or re-sign players like James Johnson and Greivis Vasquez.

In a vacuum, that seems like an easy choice. But another thing that impacts that choice is the prior summer. All these numbers assume we don't sign any two-year or longer deals in 2015, which is exceedingly unlikely.

The $80.1 million number is practically over the cap. Anything less than $5.6 million in cap room and you might as well stay over the cap and use the mid-level exception instead.

So, we shouldn't worry about the cap any more. Instead, if the team's goal is to keep the core together, they will probably focus on avoiding the tax. So, let's assume we re-sign Vasquez for the healthy raise his cap hold represents and DeRozan to a max deal. The team's salary will be at around $98.8 million, which is approximately $3.2 million clear of the tax: 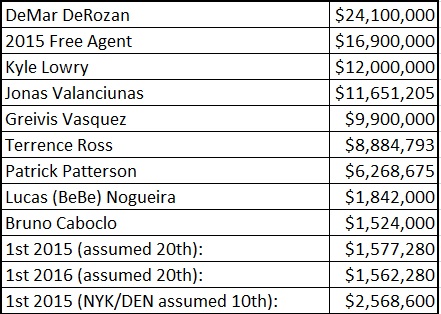 If that $16.9 million was spent on one free agent, then the team needs to fill one more spot with that $3.2 million (probably by using a chunk of the MLE). If two players were signed with the cap room, then the minimum roster size is already met.

If the Raptors don't care about spending into the tax (I suspect they wouldn't), they could use all of the mid-level exception ($5.63 million), bringing them closer to the hard cap of the tax apron ($106.0 million). That would allow them to add another role player to a team stocked with talent already, leaving them with a nice balance of veteran talent (Kyle Lowry, a potential 2015 free agent and whoever is signed with the mid-level exception), young talent (DeRozan, Vasquez, Patrick Patterson, Ross, Valanciunas), and prospects acting as role players (Bruno Caboclo, Lucas Nogueria, three draft picks).  Plus, they'll have the ability to spend well above the tax to keep them all together year after year.

It's a pretty picture cap-wise compared to what we are used to around here.

Whether the Raptors look to make a splash next summer or hold off until 2016, I certainly find myself feeling more optimistic about the team's future than I ever have before.