Should the Raptors Incorporate Some "Triangle Plays" in Their Offense Next Season?

With the NBA off-season in full swing, we delve into some possibilities regarding the Toronto Raptors next season. We start by examining the Triangle Offense and Joshua Santos wonders if the Raps should try and incorporate some of it in their offense next season.

Share All sharing options for: Should the Raptors Incorporate Some "Triangle Plays" in Their Offense Next Season?

The 2006-2007 Toronto Raptors are back and they've relocated to the city of New York! Actually it's just the greatest duo in sports history, Andrea Bargnani and Jose Calderon, who are back together. Jokingly of course these guys recently took their talents to the Big Apple to cause some ruckus.

In a trade that happened before the 2014 NBA draft, Calderon, the once beloved Raptor was involved in a mega six-player trade between the Dallas Mavericks and the New York Knicks that included Calderon, former Maverick Tyson Chandler and Raymond Felton among others.

The move may seem unsettling for Jose, who never felt comfortable in a new city after being previously traded -- even shedding some heartfelt tears upon hearing the news of his adieu from Toronto -- however this new exchange brings the benefit of the doubt for the Raptors' all-time leader in assists as he'll be back with an old time friend who could use some help.

As he returns to the East Coast Jose will be welcomed to a new team with a new culture. With Phil Jackson taking helm of the Knickerbockers, Jackson hired his top gun Derek Fisher as the head coach to lead this team out of exile.

The Zen Master has achieved tremendous results with his triangle offense obtaining 11 championships ring as head coach of the Chicago Bulls and Los Angeles Lakers. A former coach whose tactics some described as unorthodox or idiosyncratic, Jackson has been able to manage complete opposites -- Kobe and Shaq - and synchronize their personalities in unison as they fought for a common goal.

As president of the ball club, Jackson made it clear he doesn't want to coach, hiring his protégé, Derek Fisher, whom he taught the triangle with during his time in Los Angeles. He wants his apprentice to enforce the triangle upon the young team, as he believes it could become crucial in their development as they chase a ring.

Before we get into it lets understand what the heck the triangle offense is. Ladies and gentlemen, welcome to your new class: Triangle Offense 101. Here we'll discuss the basics so listen up carefully folks. According to James Gels of Coachesclipboard.net, the system essentially is designed to have all players in sync focusing heavily on spacing, where players should be about 15-18 feet out. 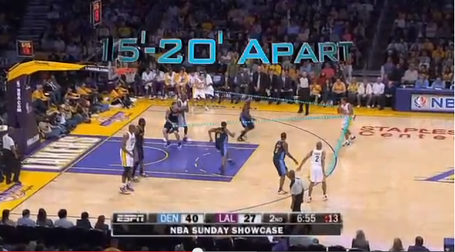 To formulate the triangle, players need to form what is called "the sideline triangle' with three players and a ‘two man game' on the weak side of the court. The sideline is formed with a post player in the front -- the block -- and two perimeter players on the wing and corner. This sideline triangle can be formed on either side of the half court. The "two man game" requires a guard at the top of the key and another wing at the elbow. There could be some variation of players spreading but as Gels states, it's best to have two post players and three on the perimeter.

Since players are required to space out so far, they now need to defend both sides of the court. This becomes problematic, as the help side defense and defensive trapping schemes are now vulnerable. Since it's a system instead of plays and calls, players need to look out to try and fill all five positional spots while also reading and reacting to the defense without having certain set calls played. To visualize here are some helpful diagrams.

Another thing to note is that the triangle is miraculous for various reasons. As a systematic regiment the triangle does not need any type of specific player. Post players, shooters and volume scorers can find comfort in this strategy.

Before we go in depth within the triangle tactics, let's understand what Calderon excels at. As most of you Raptors fans know, Jose is a fantastic shooter. A better ball distributor than Felton ever was, Calderon excels shooting beyond the arc. With the Dinos he shot well above 40% from 3, and with the Mavericks, he shot about 45%. It's his sweet spot, his bread and butter and he's one of the best in the league from that range.

To emphasize how good he was, I'll introduce you to an instrument called ShotScores. Kirk Goldsberry of Grantland.com, writes that Jose has the fourth best ShotScore during the 2013-2014 NBA season. He sits only behind dominant players Steph Curry, Kevin Durant and LeBron James.

If that doesn't sound good enough, Jose is the best among top 10 outside shooters Per 100 Shot Attempts. Impressive no doubt however Goldsberry writes that although Calderon is a fantastic shooter, it doesn't necessarily mean he is the best shooter in the league. The NBA is not a catch-and-shoot league. Players have to also create their own shots. Some players thrive in different scenarios such a Steve Novak -- catch-and-shoot -- while other players such as Curry, Dirk Nowitzki and Durant are able to create off the dribble.

A fantastic shooter, ball distributor and free throw shooter, Jose is one of the top 25 shooters ever in the history of the game. Here's another chart to show how great of a three-point shooter he is.

Within the triangle Jose will work perfectly. As the one and two guard typically mirror each other, Jose will be able to maximize his corner three-point shooting in the corners. Kobe Bryant and Michael Jordan both flourished within the triangle because of their ability to score from virtually anywhere on the court. Scottie Pippen was able to play all-five positions while Pau Gasol was able to become a low post threat, high post threat and at time is able to shot from beyond three-point land.

With Carmelo Anthony on the team Jose will be able to excel in the triangle however even without ‘Melo he would play well as he'll have the chance to using his passing and scoring to his advantage. Since the Lakers are the most recent team to use the triangle, let's use them as an example. 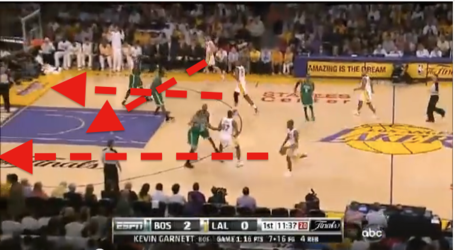 In this scheme we see Metta World Peace drawing the pick for Kobe to go in the left side. In doing so Kobe is able to swerve around him and go in the left corner. At the top Pau Gasol runs down the left low post while Andrew Bynum runs to the right. 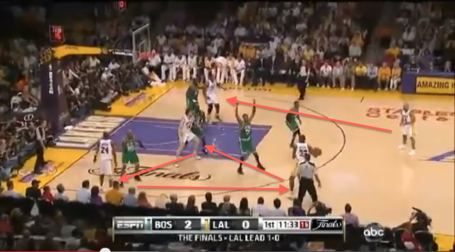 In this scenario the point guard's role is decreased. In the picture above, Kobe essentially becomes the point guard. With the artist formerly known as Artest having the ball, he can swing it to Kobe, pass it to Gasol or throw it to Fisher at the top of the key. Gasol, Ron and Kobe make a left sideline triangle while Fisher and Bynum make a two-man game.

In the examples above there's a ton of shot opportunities that can happen. If Calderon is stuck in a corner like Kobe is above, He can swing it to a man in the post, whether it is a wing like Carmelo or a big like Amar'e. He could also pass it to another guard at the top so they can form a two-man pick and roll situation.

This is why Calderon will flourish within the system. An unselfish player who can shoot anywhere on the court, Calderon will have no problem finding the open man or shot from the corner 3. Below is his most recent shot chart with the Dallas Mavericks. 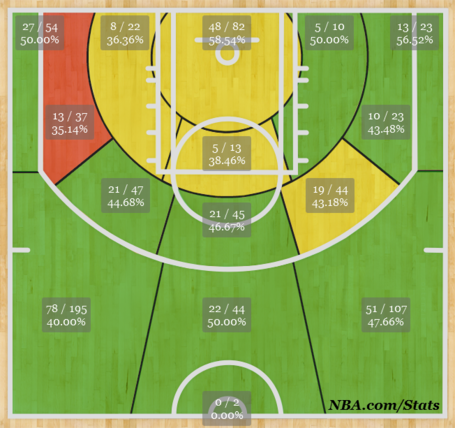 A new city, a new chance, and Jose seems excited. According to Justin Tasch of the New York Daily News, Jose says he can also help the NBA All-Star by taking pressure off Carmelo Anthony's shoulders. Also according to Adam Zagoria of The Knicks Blog, Jose said he is excited about the opportunity to play in it saying it will allow him to open up the floor well with his pass-first style.

But of course this is RaptorsHQ, so what does this all have to do with the Dinos?  Taking a look at the Raptors I strongly believe the triangle would work great with the team. Kyle Lowry, DeMar DeRozan, Terrence Ross, Greivis Vasquez and Lou Williams can shoot anywhere enabling them to have more shot opportunities while Toronto's bigs such as Jonas, Bruno, Amir, Patterson and Hansbrough will be able to focus on the post area. It's an inside out game that utilizes everyone. For clarity, let's look at the picture below for example.

For this example let's say Lowry is the 1, DeMar the 2, Ross the 3, Amir the 4 and Jonas the 5. In this scenario Lowry would run to the right corner passing to Ross. Because Jonas is most likely covered with heavy D, Ross will have to pass to DeMar while he runs to the low post. Lowry will then run to the high key opening up more opportunities. With DeMar seeing the open look, Lowry he can pass it to him or he could pass to Amir on the weak side so as to form their own isolation -- DeMar and Amir -- and get an open look. Or if he wants, Amir can come at the key to draw a pick allowing the DeMar to run around and score. There are so many variations to the triangle that it's virtually impossible for any player to not get a chance at the basket. 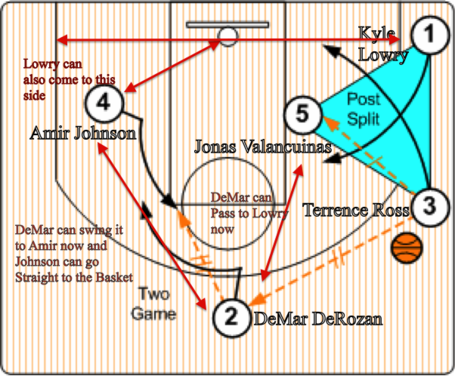 In regards to Dwane Casey his offense is set up like most of the NBA's. Heavy pick-and-roll execution with added option screens for wings like DeMar and Lowry. The Dinos occasionally feed JV but there's more added focus to get Lowry and DeMar going.

For the triangle to work everyone must be passing -- even the bigs -- and the spacing on the court must be correct. It also helps obviously to have a number of players who can effectively handle the ball and are unselfish (insert Kobe joke here).  That would be a concern with the Raps as in the starting lineup, Kyle Lowry is really the only true creator, and others like DeRozan and Ross are still trying to become better in this dimension.

However in a line-up with say Vasquez and the newly acquired James Johnson, all above-average facilitators for their positions?

Things could be very interesting and it would give the Raptors' sometimes predictable offense, a new dimension for the upcoming season.