Already making reliable contributions on the interior, the question with Jonas Valanciunas is in exactly what direction would the Raptors like him to continue expanding his game.

Share All sharing options for: Numeric Narratives: Jonas Valanciunas and the Primordial Ooze

Here's another installment of an occasionally regular column at the site called "Numeric Narratives" in which Ian Levy drops by to provide some insight about the Raptors. If you're not familiar with Ian's work, he is the editor-in-chief of Nylon Calculus, and a regular contributor to VICE Sports, Hardwood Paroxysm and Bleacher Report. He's also contributed at FiveThirtyEight.

Last week, I wrote a little bit about Terrence Ross and how his short-term development goals (becoming a more threatening on-ball creator) don't necessarily overlap with team's immediate needs. Although it's not an identical situation, there are some similarities when it comes to the Raptors' other budding young player—Jonas Valanciunas.

Playing just under 30 minutes a game last season, Valanciunas proved to be an efficient finisher around the basket, a solid rebounder at both ends and a reliable interior defender. Those are the most basic elements for being an effective big man in the NBA and the fact that he already appears to have them largely in hand at such an early stage in his career bodes well for his future. It also means that he's a lump of clay who could potentially be reshaped into all sorts of configurations, each with their own advantages and limitations.

Offensively, almost everything Valanciunas does at this point is clustered around the basket. You can see from his shot chart how quickly his effectiveness begins to fade as he moves outside the paint. 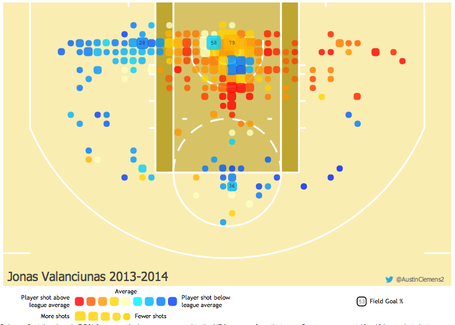 According to mySynergySports, nearly half of Valanciunas' offensive possessions were used either as post-ups or as the screener in the pick-and-roll. He was extremely effective in both situations but almost all of his pick-and-roll activity was actual rolls, directed towards the basket. At the end of the season his average shot distance worked out to 5.8 feet, just slightly less than his rookie season.

Valanciunas' role and activity is fairly constrained within the Raptors' offense, both spatially and stylistically, but it's also very small. The table below is the same one we looked at with regards to Ross last week. It shows TruUsage numbers (created by Seth Partnow), a metric which measures total offensive involvement.

You can see from the table that Valanciunas played an incredibly minute role in the Raptors' offense, less involved than everyone except Tyler Hansbrough and Chuck Hayes. Because they do less facilitating the TruUsage rates for big men are generally lower, but the league average for big men last season was 27.9 percent, a benchmark that Valanciunas fell considerably below. Just to illustrate exactly how small his role was, although post-ups made up 32 percent of Valanciunas' total offensive possessions, his post-up possessions made up just 3.4 percent of the team's total offensive possessions.

None of these things are problems, in and of themselves. All teams need efficient complementary players and Valanciunas already fits the bill in that department. However, he often shares the floor with Amir Johnson, a player of similar offensive characteristics (they were on the floor together for just over 60 percent of Valanciunas' minutes last season). Although Johnson is a much better mid-range shooter than Valanciunas, making 44.1 percent of his mid-range shots last season, he uses that weapon very infrequently. He attempted just 93 such shots all season long (along with 66 three-pointers).

In Johnson and Valanciunas the Raptors find themselves with two complementary offensive players with a significant amount of overlap between their own skill sets and the areas in which they prefer to operate. Which leaves the Raptors with an important question—do they see Valanciunas as just a complementary offensive player in the future? If not, if he is to be more of an interior anchor to their offense down the road, than the goal this season needs to be getting him much more involved in the offense. That's no easy challenge given how much perimeter ball-dominance there is on this team, with players like DeMar DeRozan, Kyle Lowry, Greivis Vasquez and Lou Williams who are all most comfortable operating with the ball in their hands.

If the answer to that questions is yes, and the goal is to keep Valanciunas as a hyper-efficient glue guy, caulking the gaps in their offense; then the goal becomes working on the overlap between him and Johnson. In either case having Johnson continue to stretch his range is crucial, as simply adding this facet makes the team's offense more versatile and dynamic. But having Valanciunas continue to stretch his range is important as well. He made 33.6 percent of his mid-range shots last season and if he can push that number towards 40 percent it would allow him and Johnson to be more interchangeable at the offensive end, opening up all sorts of possibilities.

The Raptors have done themselves a great service by identifying the talent in both Terrence Ross and Jonas Valanciunas, and in elevating that talent to it's current level of consistency. But they have also found players who are capable of being shaped in a variety of directions. Getting the most out of each player will take a balancing act of short-term goal management and the foresight to see beyond the current iteration of this team to identify future needs.