In the final part of his multi-part series, Daniel Hackett takes a look at the Greivis Vasquez signing and more.

Welcome back to the final installment of our look back at the Raptors’ off-season.  You can read Part 1 here, Part 2 here, and Part 3 here. I’d like to point you once again to Shamsports.com for all your salary needs, and to CBAfaq.com for all your cap-related questions (I am of course happy to answer any here).

With Steve Novak traded to open up room under the tax, and the re-signing of Kyle Lowry and Patrick Patterson, there was one final order of business left: bringing back Greivis Vasquez.

Vasquez and the Mid-Level Exception

In the end, Vasquez re-signed with the Toronto Raptors for $13 million over two seasons. Masai Ujiri preferred a short-term deal in order to keep a relatively clean cap sheet for 2016. Vasquez's deal is backloaded, but only slightly, as he will receive a salary of $6.4 million this season. This allowed the Raptors to keep a bit more of their mid-level exception to address the back-up small forward position.

That spot was filled with the signing of James Johnson for $2.5 million per year for two years. After the Johnson signing, the Raptors were left with $2.8 million of the mid-level exception, but they were also just approximately $850,000 from entering luxury tax territory. Even if the Raptors signed someone else at the veteran's minimum, it would send them into the tax.

At the end of summer league, Dwight Buycks was waived. Because he was on an unguaranteed deal, the money doesn't count against the cap. This cleared another $800,000, which meant the Raptors were now around $1.6 million clear of the tax. So, they now had the money to pursue a player at the veteran's minimum, which is set at $915,000.

So, to recap: the Raptors had $2.8 million of their mid-level exception left, and $1.6 million to spend before they went over the tax. In reality, players who sign for the veteran minimum receive up to $1.4 million, even though their deal only counts for $915,000 against the cap (and tax), with the league paying the difference. The money these players get is similar whether they're signed with the remaining $1.6 million under the tax via the mid-level exception or signed to a minimum deal.

The opposite is true for rookies and sophomores. They earn less than $915,000, but count for that amount against the tax anyways, as a measure to prevent teams from waiving veterans and signing rookies in order to avoid the tax.

This scenario puts that particular team under what is essentially a hard cap. Last year, the Raptors received Quentin Richardson in a sign-and-trade as part of the deal that sent Andrea Bargnani to New York. As such, they were hard capped at the apron for the season.

By using the tax-payer's mid-level exception this season, the Raptors are not being hard capped. Why is this important? Considering how close they are to being over the tax, this greatly increases the flexibility they have to pull off a huge trade (should the opportunity arise) during the season.

The downside is that, instead of having $1.6 million to spend, they are limited to the $1.4 million veterans minimum. They also have the ability, with the rest of their remaining tax-payer's mid-level exception, to give a slight raise over the minimum to any undrafted rookie or second round pick (the Raptors have $700,000 remaining of this MLE, the rookie minimum is $500,000).

While the Raptors may not be willing to go over the tax with a depth signing for $3 million, they might be willing to get into luxury tax territory and even go above the apron should a game-changing trade present itself this season. It's difficult to say what that deal might be, and there are no obvious fits on the market at the moment, but at least we know the Raptors can get themselves in the conversation for one of these trades should they want to upgrade the team mid-season.

Conclusion, or, To Be Continued

The Raptors eventually signed Will Cherry to a minimum deal for two seasons. The first year of the contract will pay Cherry around $500,000, but will count for $915,000 towards the tax. The second year is reportedly unguaranteed, while the first may be only partially guaranteed. With this signing, the Raptors added a third point guard to their depth chart, and the roster was full.

Even so, they went ahead and signed Jordan Hamilton. To me, the signing makes little sense at this stage, as the roster is now pushed to 16 players headed into training camp, and will need to be trimmed down to 15 before the start of the season. The signing also pushed the Raptors into luxury tax territory. They're currently over by about $200,000. This means not only that they could be taxed for this amount, but that they lose the tax payout non-tax teams get (about $3 million), and it could potentially start the clock on repeater tax penalties down the road.

Hamilton's deal is reportedly partially guaranteed and is for the minimum. It counts for $915,000 against the tax, the same as Cherry's deal. The partial guarantee suggests that either Hamilton or Cherry will be let go before the season, unless Ujiri unloads another contract before opening night. Depending on how low the guaranteed amounts on the contracts are, waiving one of Hamilton or Cherry would put the team back below the tax before the start of the season.

And so, here's where the Raptors sit at the moment: 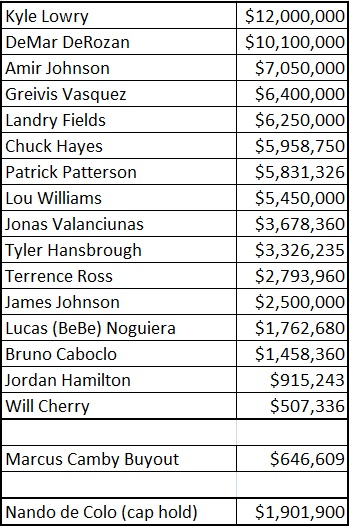 The overall salary amount for the roster is at $77.0 million, above the $76.829 million luxury tax level.

Thank you for reading, and I hope you enjoyed my look back at what turned out to be a very eventful off-season. Stay tuned, as my next series will look ahead to how the Raptors are positioned for next summer and beyond.