On Jonas Valanciunas and His Patented Pump Fake

As a critical element to the team's fortunes next season, Jonas Valanciunas needs to focus on improving the one obvious deficiency in his game.

Share All sharing options for: On Jonas Valanciunas and His Patented Pump Fake

I did a double take at a certain Jonas Valanciunas photo earlier this off-season. After two encouraging seasons in the league, Valanciunas is bulking up. Getting strong is a priority for the big man, but there's also another part of the game he needs to focus on.

Valanciunas surprised me in the playoffs last season. He scored the team's first eight points in Game 1, and topped 15 points in three of the seven games against the Brooklyn Nets. What shone through was a sense of cool confidence that was missing in much of the regular season. When guarded by the smaller and relatively feeble Kevin Garnett in Brooklyn’s small-ball lineup, Valanciunas was decisive when he caught the ball, an aspect of his game I hope carries over to this season.

Even with the encouraging results from the playoffs, offensive decisiveness remains an issue. Beyond his visible frustration, the one thing that stands out is the now very well known Valanciunas pump fake:

The pump fake is hilariously useless. It shows a lack of fundamentals from Valanciunas, as he's merely raising the ball with a slight head nod. Other than redefining the limits of what a pump fake is, it definitely ignores the true purpose of the move. My best guess of how many defenders fell for the patented pump fake last season? Between zero and two. In fact, he'd often bail out his defenders altogether by traveling.

Aside from the hilarity of the move, it reveals an aspect of the game that Valanciunas needs to improve on. The pump fake is often used in the eight to 16 foot range, an area of the floor that Valanciunas is still uncomfortable with on the offensive end. His regular season shot chart from last year proves that point: 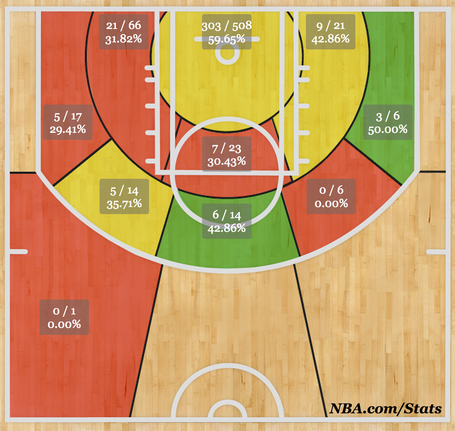 Valanciunas took 110 shots from the eight to 16 foot range, the area where his pump fake is most often deployed. The intention is to get his defender to bite so he can take one dribble into the lane where he's more comfortable. The problem is, scouting reports exist and people around the league know that he's not yet an effective player in that range.

For Valanciunas to change that perception, he needs to be confident enough to knock down a ten-foot jumper on a regular basis. This type of growth has been exhibited by other international big men in the past. Here's Marc Gasol's shot chart from his second year in the league: 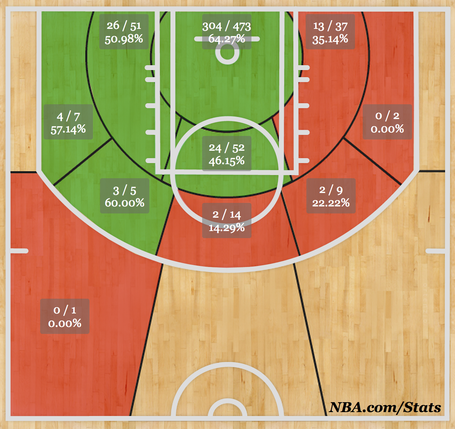 Look familiar? In many ways, it's similar to the shot chart of Valanciunas. Now, here's Gasol's shot chart from last season: 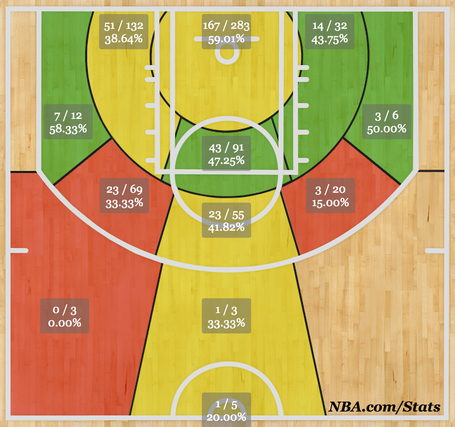 As you can see, the distribution of shots is much more spread out. For Gasol, his improvement as a high post passer and chemistry with Zach Randolph were two important factors in pushing him to operate further away from the basket. While there's no complimentary big man in Toronto to relieve Valanciunas' duties on the low block, developing a consistent jumper would be a huge boon to his game.

Valanciunas may simply improve from the playoff experience of last season and become more comfortable on the offensive end in his third year. And while he's bulked up and seems primed to make another leap, the addition of a mid-range jump shot could make him downright scary.