In the third part of his multi-part series, Daniel Hackett takes a look at contract incentives for DeMar DeDozan and Amir Johnson.

Share All sharing options for: Off-Season Review Part 3: A Look At Contract Incentives

Welcome back to another installment of our series looking back at the Toronto Raptors’ off-season. You can read Part 1 here, and Part 2 here. I’d like to point you once again to Shamsports.com for all your salary info needs, and to CBAfaq.com for all your cap-related questions. (Though, I am of course happy to answer any in the comments.)

Now, a quick summary. In the previous installment, the Raptors had just completed a trade that sent Steve Novak to Utah after successfully re-signing Kyle Lowry and Patrick Patterson. The Novak deal opened up just enough room under the tax for a Greivis Vasquez signing. But before we discuss that, let's take a brief interlude to talk about contract incentives.

The Contract Incentives Of DeMar DeRozan and Amir Johnson

Before the Raptors announced the re-signing of Vasquez, we found out that DeMar DeRozan had earned $600,000 in incentives last season for making the All-Star team.

A brief primer on how incentives work: they are, as you would expect, based on milestones or accomplishments which are agreed upon during contract negotiations. By accomplishing these particular goals, a player is paid a bonus in that season. Any incentive applies to each season of a contract.  That is, if a player had an incentive based on All-Star appearances, he receives bonus money in each of the seasons in which he makes the All-Star game.

Incentives are not raises, though. They only apply to the season in which they are earned. So if a player meets his incentive one year, his salary is increased, but if he fails to meet the incentive criteria the next season, his salary in the second year drops back to what it originally was.

DeRozan's incentive that was tied to All-Star appearances earned likely status for next season based on his selection to the All-Star team this season. So, it meant that the $600,000 incentive he earned would be counted towards the cap for next season. For this season, it's not a huge factor, given that the Raptors were over the cap anyways.

What is a big factor is that we weren't aware of this incentive before.  Now we're able to calculate the real impact of his salary towards the team's financial position. For salary cap purposes, DeRozan is not just earning his base salary of $9.5 million. Instead, we need to include his incentives, which put him at $10.1 million. This off-season, we also learned that Amir Johnson has an unlikely incentive worth $50,000 for next season (it's unclear as to what criteria he needs to meet to earn this incentive). Even though it is classified as unlikely, this amount counts against the tax. So, based on our recalculations, the actual available money under the tax threshold for the Raptors shrinks by $650,000, and stood at about $9.75 million at this stage of the off-season. 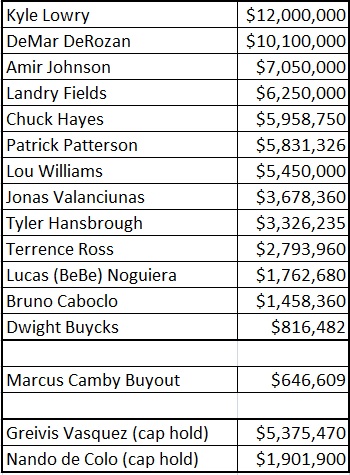 We'll discuss the Vasquez re-signing and wrap up the rest of the off-season moves on the next installment. In the meantime, have fun telling people about contract incentives at your next dinner party.  I'm pretty sure it'll be a big hit.