In the second part of his multi-part series, Daniel Hackett takes a look at the start of free agency and the Steve Novak trade.

Welcome back to another installment of our series looking back at the Toronto Raptors’ off-season. You can read Part 1 here. I’d like to point you once again to Shamsports.com for all your salary info needs, and to CBAfaq.com for all your cap-related questions. (Though, I am of course happy to answer any in the comments.)

Now, a quick summary: the Raptors had just completed the Salmons-Williams-Nogueira deal. We still didn't know if the team would retain their free agents or try to use cap room. At this point that potential cap room had shrunk to the $10 million range, making re-signing the more likely choice. And then right on cue:

Despite a Houston flirtation and crazy talk involving Miami, Kyle Lowry re-upped with the Raptors at $48 million for four years, with a player option in the final year. The deal was structured as a flat deal, meaning Lowry would be paid $12 million for each of the four seasons.

Quickly following that, Patrick Patterson re-signed for $18 million over three years. Unlike the Lowry deal, the money was not spread out equally over the three seasons. Patterson would make a little less than $6 million this season, a bit over that mark next year, and almost exactly $6 million in the final year. This deal was slightly back loaded which means a bit more flexibility for the Raptors this season. To be precise, we're talking about $170,000 off the books this season compared to if it was a flat deal.

It was clear that rookie Bruno Caboclo would be signed, and word came down that the Raptors would also try to sign Bebe Nogueira. So, assuming they both signed for 120 percent of their rookie scale salary, a standard practice for most teams unless you're the Thunder (or the Grizzlies), the salary cap position of the Raptors looked like this: 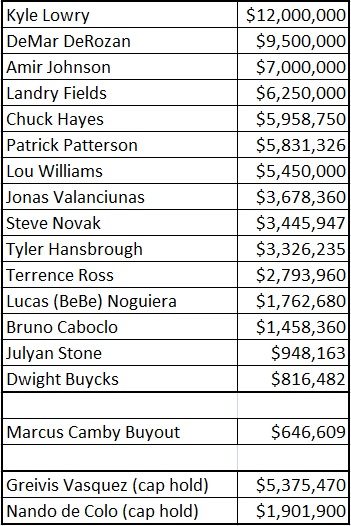 With these signings, the concern was certainly no longer the cap, as the Raptors were approximately $7 million over its limit. Instead, the luxury tax line was looming very close. If re-signing Grievis Vasquez was going to take at least $4 million, even by the most optimistic of guesses, then there would be no room to use the mid-level exception -- which allows a team over the cap to sign a free agent to a deal around $5.3 million per year -- unless the team went into the tax.

Something needed to be done.

Out of nowhere, Masai Ujiri found a taker for Steve Novak - a problem for the cap not only this year, but one of the few non-core pieces that inconveniently was poking his head into the team's cap room for 2015, which is going to be significant. Novak was sent to Utah, who were well under the cap floor. The cap floor is 90 percent of the cap, and represents the minimum amount a team is required to spend on players.

Teams can refuse to sign players, and in the most extreme scenario, field a team of minimum salary players for a total of around $7 million. To prevent cheap owners from doing exactly that, there is a rule that teams must spend at least 90 percent of the cap every year.

Now, the owners can still take the approach of coming in at below the cap floor. There is no penalty, except they have to pay extra money to make up the difference. The cap remains very low for the team, but the money out of the owner's pockets gets bumped up to the cap floor. This year that would be $56.7 million. So, in the theoretical scenario where the owner only spends the very minimum on players, he would still have to shell out an additional $50 million to spread among all the players on his team. Not very smart, right?

So what teams often do when they're below the floor and have no intention of signing big name free agents is absorb unseemly contracts from other teams.

Usually these are one year contracts, but when a team like Utah projects to be under the floor the following year as well they can absorb a contract like Novak's. They lose cap room but it's money they weren't going to spend anyway. In the process they gain an asset as the cost of absorbing a bad contract from another team.

In this case, Novak was traded to Utah and attached with him was a 2017 second rounder from the Knicks. In exchange, the Raptors received the unguaranteed contract of Diante Garrett, who was waived immediately and does not represent a cap hit for the team.

Because the Raptors sent out one player and took less salary back in return, they generated another traded player exception ("TPE"). A TPE -- also referred to simply as a trade exception -- allows the team to absorb a salary without sending any salary back in a future trade.

Shortly after the Novak trade, the team announced that Julyan Stone had been waived. His unguaranteed contract would no longer count against the team's cap, clearing about $950,000 in available cap room in the process.

Without Novak and Stone, the Raptors were sitting about $10.4 million clear of the tax.

At this point, their salary cap situation looked like this: 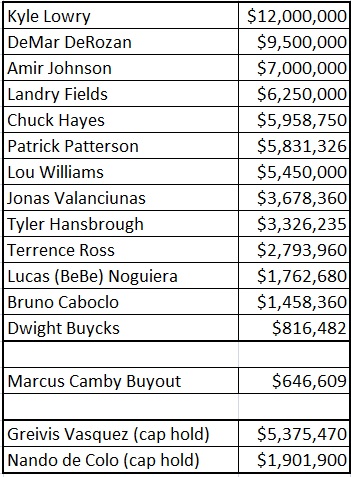 This left room to negotiate a deal with Greivis Vasquez and still leave room to use the MLE.  Be sure to tune in next time for an unexpected turn of events in part three.