This Could Be The Year Terrence Ross Breaks Through

Heading into his third season, Ross seems ready to break out. We explain why.

Share All sharing options for: This Could Be The Year Terrence Ross Breaks Through

Entering the 2012 NBA Draft, the Raptors wanted a player who could control the wing, carry some of the scoring load, and play along side DeMar DeRozan. Terrence Ross fit the profile of what the team was looking for, and he was taken with the eighth overall pick.

In his lone season at the University of Washington, Ross displayed his athleticism and offensive skill set, averaging 16.4 points and 6.4 rebounds in 35 games. After being drafted by the Raptors, Ross performed well at Summer League in Las Vegas, finishing second on the team in scoring, averaging 14.4 points per game.

The competition at the collegiate level, and the not-quite-pro-level competition at Summer League helped prepare Ross for his rookie season, but the true test came when the actual season began. Rookies often find that they need to re-adjust their games at the pro level. For some, it takes longer. A year, perhaps two. Some never quite find a fit at the pro level at all.

For Ross, there have been some individual highs -- most notably his 51-point game against the Clippers last season -- but he hasn't been spectacular. Heading into his third season, Ross is still a work in progress.

Here's a look at the numbers so far. In his rookie season, Ross averaged 6.4 points and 2.0 rebounds per game. Playing a much smaller role that he was accustomed to in college, Ross had limited minutes to prove himself. On the court, he seemed hesitant, and simply wasn't given the time to get comfortable on the floor. He put up a plus/minus of -0.9 and a player impact estimate of 6.0%. His impact on the team's overall success was minimal.

We can also look at his rookie season shot chart to learn a few things: 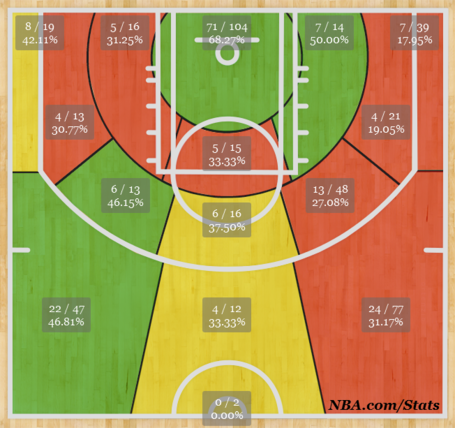 Ross showed his three-point range and an ability to finish around the basket, skills that he flashed in college and made him an appealing prospect at the draft. He shot at a below league average rate, but as the season went on, Ross seemed to be getting more comfortable in his role. Still, there was room for improve provided Ross could improve on being a more consistent shooter.

In his second season, Ross saw his minutes per game increase from 17.0 to 26.7, and averaged 10.9 points while increasing his three point attempts per game from 2.7 to 5.0 per game. He also shot 39.5 percent from downtown during the regular season.

Of course, the lingering memory from last season comes from his horrific first round series against Brooklyn. Against the Nets, his shot chart looked like this: 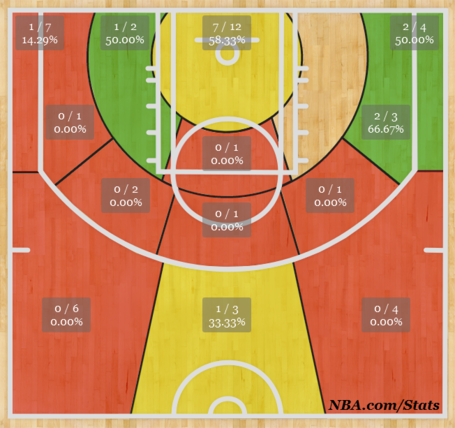 There's no getting around it: Ross was terrible in the playoffs. Ross averaged a pedestrian 5.0 points, 2.0 rebounds and shot just 16.7 percent from downtown, a far cry from the improvement he had shown in the regular season.

Against Brooklyn, Ross had an especially hard time against the bigger and more experienced Joe Johnson. Ross allowed an opponent field goal percentage of 70.6% at the rim. Despite being a liability on defense and his poor shooting on the offensive end, Dwane Casey stuck with Ross throughout the series, as the playoffs were both a win now proposition but also more importantly, a learning experience for someone like Ross.

The most encouraging part -- aside from his nightmare series against the Nets -- is the substantial improvement Ross made in his second season from beyond the arc:

There are concrete signs that Ross can continue to improve and become a more well-rounded player. He's a slasher with the ability to finish, and -- at times -- a consistent shooter with three-point range.

As he enters his third year, Ross understands the challenges ahead of him and is ready to redeem himself. The playoffs was an eye opener for Ross, and now he can take that experience and build on it

I contend that Ross can still be a great overall player. He's a slasher with dynamite finishing skills, and a shooter with a deep range. As he enters his third year, it looks like Ross understands the challenges ahead of him. The playoffs gave him a chance to experience the shock of basketball at a higher level, and his key talents appear to be trending upward. Now may be the time he goes all out and proves how valuable he is to this team.

With a playoff appearance under his belt, and the encouraging signs from last season, there's little doubt Ross can take the next step and breakthrough this upcoming season.