In this multi-part series, Daniel Hackett takes a look back at what the Raptors did this off-season, breaking down each move and explaining the salary cap implications of these transactions.

For anyone interested in salary cap related information, I'd like to start by pointing you to Shamsports.com. The site is run by Mark Deeks -- who was recently profiled at Grantland -- and is the best source for everything including cap holds, traded player exceptions and such. This piece would not be possible without the information at Sham Sports.

You should also check out CBAfaq.com by Larry Coon. It covers pretty much everything you need to know about the collective bargaining agreement. If you have any CBA questions, feel free to leave them in the comments. I'm happy to explain terms such as cap holds, what the apron means and anything else.

Terrence Ross got a huge steal, Kyle Lowry got his shot blocked and a hard fought seven-game series against the Brooklyn Nets was over. The Raptors got a standing ovation from the home fans, and with that, the off-season had officially begun.

In terms of contracts and their impact on the team's 2014-15 salary cap position, this is what we knew at the end of the playoffs: 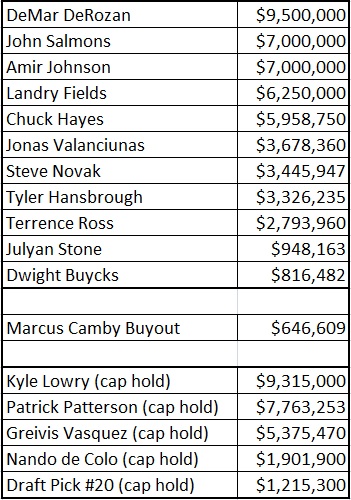 So, if all their free agents walked to another team, the Raptors were looking at about $10.5 million in cap room to sign another free agent.  Until they did, though, their cap holds meant that the Raptors had no cap room at all.  So it became a choice: either the team could let their free agents go, and have cap space to sign someone like Luol Deng, or they could keep their own free agents (Lowry, Patterson, Vasquez), but they couldn't do both.  If they looked to re-sign their own free agents, Lowry would be their top priority with Greivis Vasquez and Patrick Patterson being next on the list.

John Salmons' contract had a buyout clause where only $1 million was guaranteed if he was waived before July. This made it possible for the Raptors to clear cap room by simply waiving him (putting them at about $16.5 million in cap room if Lowry, Patterson and Vasquez walked). Ideally, the Raptors would have preferred to use him as a trade chip to absorb a salary, allowing another team to clear cap room. Tyler Hansbrough had a similar option in his contract, but was brought back at $3.3 million for this season.

Nando de Colo is playing overseas this coming season, but the Raptors still hold his rights. That means his cap hold sits on the team's salary cap, so it does eat into any potential cap room. But under the CBA, the cap hold does not affect tax calculations.

The Raptors entered draft night with three primary targets: Tyler Ennis, Gary Harris and Bruno Caboclo. The team wanted to acquire another first round pick in order to secure two of those players.

On draft night, the team had agreed in principle to a trade with the Memphis Grizzlies that would have seen them acquire the 22nd pick and Tayshaun Prince's contract in exchange for John Salmons and his contract which, as we mentioned, could be waived.

The deal was conditional upon one of Toronto's targets still being there at the 22nd pick. Instead, Ennis and Harris were drafted with the 18th and 19th pick by the Phoenix Suns and Denver Nuggets respectively, leaving only Caboclo on Masai Ujiri's wishlist. The Raptors took him with the 20th pick and the deal with the Grizzlies lapsed.

After all of this, the John Salmons contract was still on the table as a trade chip. And this is when the Atlanta Hawks entered the discussion.

The Hawks wanted to make a run at Luol Deng in the off-season and needed to clear cap room to do so. In Lou Williams, they had a sixth man coming off an injury. In Lucas Nogueira, they had a rookie stashed overseas making noise about coming over to the NBA sooner rather than later. The Hawks drafted Adreian Payne and Walter Tavares, and Nogueria was deemed expendable, especially since he wanted to sign right away and was an injury concern the year before. So, he worked perfectly for a cap clearing deal despite being drafted 16th overall in the prior year.

This worked out perfectly for the Raptors because he was high on Ujiri's list of targeted players in the 2013 draft, when the Raptors were without a first rounder. It was reported that Ujiri tried hard to get into the draft, and was targeting Giannis Antetokounmpo and Nogueira.

One year later, Ujiri got one of those guys when the Hawks traded Lou Williams (on a $5.5 million expiring contract) along with the draft rights to Nogueira to the Raptors for John Salmons. The deal was done at the very last minute, just minutes before Salmons' contract would have become guaranteed.

After the trade, Salmons agreed to extend his guarantee date to July 10th in order to let the Hawks figure out if they wanted to keep his $7 million expiring contract depending on what happened during free agency. Even after striking out in free agency, the Hawks decided to waive Salmons on July 10th.

So, based on all these transactions so far, the salary cap position of the Raptors did not change much from the start of the off-season to the end of draft night. But from a talent standpoint, Ujiri was able to swap a fringe bench piece in exchange for a back-up combo guard who would also serve as insurance if Lowry left via free agency, and a former 16th overall pick who Ujiri wanted a year ago.

At this stage in the off-season, the cap situation for the Raptors looked like this: 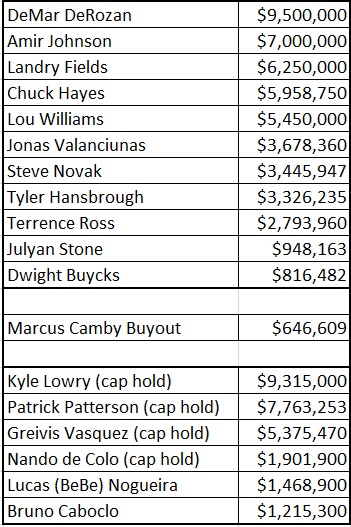 With the above roster, the Raptors were sitting at approximately $10.5 million in cap room, if they didn't re-sign any of their free agents. In part two, we will take a look at what Toronto did in free agency.