With basketball withdrawal squarely affecting the HQ team, we try to stir up some discussion by bringing up some talking points that have been on our minds this NBA offseason.

Share All sharing options for: Dog Days of Summer - Some Raptors and NBA Offseason Thoughts Part 1

You know you're starved for basketball when you suffer from NBA Summer League withdrawal. I find myself reminiscing about the glorious days of games with no foul-out rules being played by fringe NBA-ers with their careers on the line. It's a different kind of high stakes environment than the NBA Playoffs, to be sure. With a few months still to go before training camp begins, the NBA offseason activity has slowed to a crawl. The musical chairs of the big free agency names is almost complete, with a couple of notable teams left without a seat. The draft had its fair share of surprises (BRUNOOOOOO), and much of the prospect analysis we did was rendered useless (damnit Masai!). As we await the start of meaningful basketball once again, I've decided to toss in my two cents on some talking points of this offseason. Feel free to burn my terrible opinions to shreds!

Forget the personnel, the playoff results, and the coaching pedigree. Strictly in terms of philosophy, it's not unreasonable to say that Masai Ujiri is employing the same process he used in Denver to build a fringe contender. Ujiri's nuggets peaked in 2012-2013 with 57 wins, using a roster that lacked star appeal, but had an impressive collection of "good" players and depth. Although they were stymied by Stephen Curry's emerging Warriors team in the first round of the playoffs, the Nuggets were many people's sentimental favourites that season. Consider the table below:

Carmelo Anthony, a legit top-10 NBA player, was traded in 2010-11, and the team didn't miss a beat and eventually peaked after his departure. Assets like Danilo Gallinari, Raymond Felton (pre weight gain), Timofey Mozgov all solidified Denver's depth. The Nuggets had no one on their roster averaging over 17 points per game in the 2012-13 season. I think the Nuggets experiment proved to Ujiri that you can build a good team without a star on the fly, and hope to acquire an elite talent that eventually puts you over the top. Andre Iguodala is not a star, but is the type of game-changing two-way player that Denver needed to bring them to cusp of 60 wins.

Ujiri used the same philosophy in offloading Rudy Gay and strengthening the Raptors' bench. After the Raptors had the best record in the East post-trade, Masai did the smart thing by locking up all of his own free agents to fair contracts. Add in the Lou Williams trade, and the James Johnson signing, suddenly the Raptors are an Andre Iguodala of their own away from being a factor in the East. Can teams bank on chemistry to play out the way it did for the Raptors last season? Certainly not, but both the Raptors and the Nuggets serve as an example of why teams should seize the opportunity to compete when it presents itself. Do stars make competing easier? Of course. But as Masai's shown, there's more than one route to success.

The LeBron James to Cleveland saga appears to still have one final, big domino that needs to fall, as the NBA reshuffles after King James decision to return home. The framework of the deal that's being talked about has Kevin Love heading to Cleveland, and Canadians Andrew Wiggins and Anthony Bennett headed to Minneapolis along with a 1st round pick. On the surface, this is a deal that Cleveland should make. Kevin Love is an offensive force - the type of stretch 4 that LeBron James has never had the opportunity to play with. He's one of the top offensive players in the game, a fierce rebounder and fantastic passer, who will create tons of transition opportunities for LeBron on leak-outs. For Minnesota, simply put, there's no deal that will be better than getting the past two 1st overall picks. Side note -- Chris Broussard thinks Bennett and Wiggins would embrace Minnesota because the weather's similar to Canada's. Alrighty then.

Naturally, there's some hesitation on Cleveland's end to include Wiggins in the Kevin Love deal. The potential of LeBron grooming Ender as he enters his prime is tantalizing. Wiggins can take pressure off LeBron defensively now, and contrary to popular belief, having watched a ton of Kansas games last year, he doesn't need the ball in his hands to be effective. It really is a difficult call to make for the Cavs.

The angle to this trade that I think needs to be talked about more is how strange this must all be for Andrew Wiggins. He was drafted by the Cavaliers -- a team that's suddenly become Canada Basketball's feeder program. He had an introductory press conference where the team expressed their excitement in building a team around him and Kyrie Irving. Then LeBron decided to come back home, suspiciously omitting Wiggins and Bennett in his essay, and the entire narrative was flipped. Suddenly, Wiggins was without a rookie contract, he wasn't made available to speak to the media in Vegas, and was playing in the summer league without knowing whether he was wearing the wrong jersey. Journalists and basketball experts were picking apart his game in trying to determine whether he was worth trading Kevin Love for. All this before he's played a single meaningful minute of pro basketball in his career. As a fan of Canada Basketball, I only hope that exposing Andrew Wiggins to the business side of basketball thickens his skin and lets him flourish and play with a chip on his shoulder, wherever that may be.

You think this stretch of no basketball is unbearable? Don't get too cozy once the NBA kicks off, because the next set of labour negotiations in 2017 will have several talking points that could take a while for the players and owners to come to an agreement. I don't profess to be a CBA expert by any stretch of the imagination, but the financial landscape appears to be lopsided in the owners' favour, and it wouldn't surprise anyone to see an extended layoff for a few reasons:

It's unfortunate that we don't celebrate the world's second most popular team sport's (btw, I meant basketball) most prominent showcase like we do for soccer. In North America, the FIBA World Cup is an afterthought -- especially following the high of the FIFA World Cup in Brazil. But the sport of basketball is played with an international flair that feels more tangible than ever. The Spurs' international flavour has been well documented, so I'll only touch on it briefly. The Spurs 3 main cogs were born in France, the US Virgin Islands, and Argentina. Their team and coaching staff was comprised of people from Australia, Brazil, Italy, New Zealand, and yes, Canada, among others. It's why I found the Spurs so easy to cheer for. The fact is, international elements of basketball are now the norm in the NBA. It's no longer weird to see James Harden "euro-stepping" his way to a 3 point play. Pick and rolls have absolutely transformed the way teams initiate their offences. Dirk Nowitzki has played a big role in revolutionizing the role of Power Forwards in the NBA -- "stretch 4"s are a necessity on every roster. Needing to make an impact in marketing a team internationally is why the Kings, owned by an Indian-American, Vivek Ranadive, took a flyer on Indo-Canadian big man Sim Bhullar in Summer League. And the brief success of Yao Ming is why we see scenes like this when NBA stars visit China: 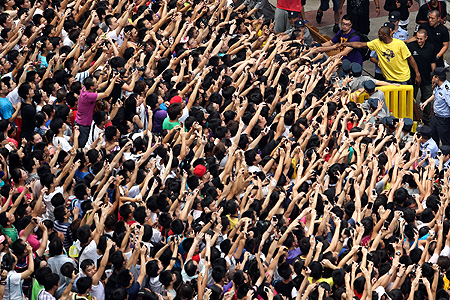 Teams are more and more willing to to take a "risk" on international prospects in the NBA draft. It won't be long before we won't have to call them risks simply for being born across the pond.

Parity in the international game is great for the sport. It's why it was awesome to see Team Argentina win Gold against all odds at the 2004 Olympics. It's why it was considered a landmark moment when India beat China at FIBA Asia. And it's why I'll be tuning in this year to see if a powerful Spain can defeat a depleted American team at the FIBA World Cup. This event will be awesome.