No Truth to Lowry Sign-and-Trade to Heat Rumour

Lowry fleeing Toronto and Bosh looking to return to his glorious past with the Dinos? Pump the brakes...

Share All sharing options for: No Truth to Lowry Sign-and-Trade to Heat Rumour

Last night during the NBA Draft, you may have seen a number of tweets make the rounds on the interweb, ones that looked like this: 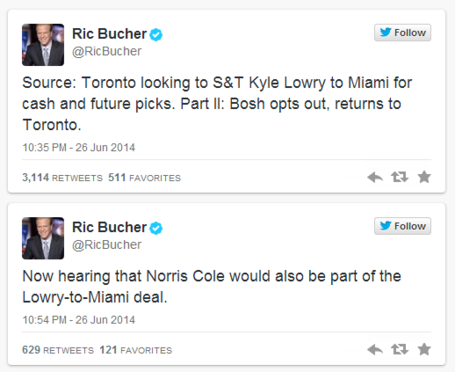 I received a billion tweets and notes after this about the rumour, and folks were freaking out as to why we didn't post anything about it, or discuss this pending atrocity.

Simply put, because I was considering the source.

Look, by no means do I harbour any ill-will towards Ric Bucher, who seems to be a nicely tanned human being, but he hasn't exactly had a great track record in terms of reporting accuracy.  (For more on this, please see Tom Ziller's twitter timeline.)

After said tweets, numerous members of our respected Raptors media indicated they had no knowledge of such a sign-and-trade possibility, and this evening, sure enough we get:

Now, that doesn't mean Lowry doesn't end up with the Heat.  While I'd be surprised considering the amount of money he'd be leaving on the table, I wouldn't be shocked.  It is a chance to play for a title with LeBron James and co. (assuming they all stay of course) that we're talking about here.

But for now, let's just get back to some sane discussions involving BRUNO ok?