The interweb thinks Tyler Ennis will be a Toronto Raptor. Tyler agrees.

Share All sharing options for: Ennis Believes He'll Be Selected by Raptors or Magic in 2014 NBA Draft

Yesterday we noted that the majority of the interweb's mock drafts believe Tyler Ennis will fall to the Toronto Raptors at the 20th spot in the draft, and the Dinos will then snatch him up.

It sounds like Ennis himself believes that will be the case come tomorrow night as well.

Talking to ESPN.com's Andy Katz this morning, Ennis predicted that he'll be selected by either the Raptors, or the Orlando Magic tomorrow.  The Magic have two picks in the first round, fourth and twelfth overall, and need a steady hand to help run their ball club.  However they may grab a point guard with the first of their two picks, so whether Ennis is around at 20 is likely predicated on how Orlando uses that first, first-round pick.

(Oh, and that fourth overall pick is likely based on what the Cavs do with their first-overall pick,and the Bucks do with...etc, etc.) 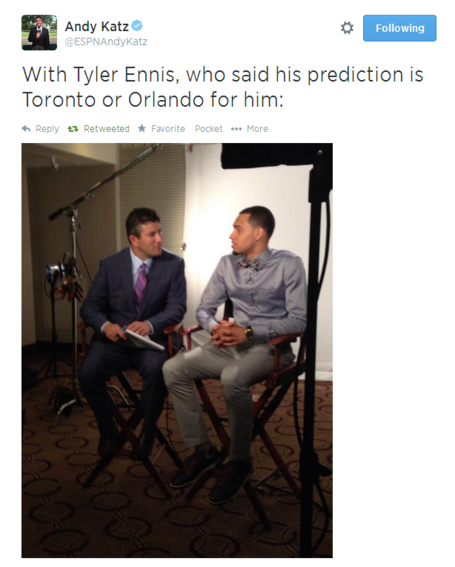