Was Kyle Lowry Robbed of an All-NBA Team Berth?

Taking a break from draft talk, the HQ takes a look back at Kyle Lowry's All-NBA Team snubbing.

Share All sharing options for: Was Kyle Lowry Robbed of an All-NBA Team Berth?

Prestigious point guard of the north, Kyle Lowry was snubbed from multiple accolades despite his star-like contributions to the Toronto Raptors' franchise this 2013-14 NBA season.

First there was the All-Star voting, as league coaches chose others like Joe Johnson over Lowry.  Then more recently, members of the media dismissed him as a valid option for any of the three "All-NBA Teams."  Lowry only received 29 votes in the latter case.

The heart and soul of the Raptors, Lowry played his best NBA season last year, and it's fairly certain that Toronto never would have finished with the third best record in the Eastern Conference, nor made their first playoff appearance since 2008 had Lowry not had the season he did.

The true M.V.P. of the team, Lowry is more valuable than any other player on the Raps, and keeping him for a couple more years is vital if the organization hopes to achieve better results down the road.

When he didn't make the All-Star selections for this season's NBA All-Star Game, many Raptors fans were flabbergasted and rightfully so. Back in January, fellow HQ writer, Zach Salzmann, wrote that despite DeMar DeRozan's overdue yet congratulatory All-Star selection, the coaches should've selected Lowry even over DeMar. Salzmann acknowledged that perhaps Lowry's reputation was at play in the decision, something that by all accounts wasn't the greatest league-wide amongst coaches.

Over at RaptorsRepublic.com, Blake Murphy agreed saying that despite Lowry ranking 53rd in scoring -- he is a pass first traditional point guard after all -- the numbers and statistics show Lowry had a strong case to make the All-Star game.

With the All-Star game over and done with, it was on to the "All-NBA" voting and as noted, Lowry was snubbed again. This was despite evidence that Lowry had a better season than many of the final options. While Lowry making the second "All-NBA" team might have been a bit of a stretch, the HQ's Braedon Clark had Lowry making the third team back in March saying as the emotional leader he is, Lowry was the difference maker between a heart wrenching loss and nail-biting win. He continued writing that Lowry played better than Tony Parker of the San Antonio Spurs and Damian Lillard of the Portland Trailblazer, both of whom, yes, ended up with "All-NBA" spots.

Here were the final results:

What's most notable about this is DeRozan, who played great just not as good as Kyle did this season, received more votes than Lowry did, with 56.

Not to bicker on DeMar, but I don't know how he got more votes than Lowry, yet again. Sure DeMar took flight when Rudy Gay left, but Lowry was simply more valuable overall, and more important to his team. This however isn't an argument of Lowry versus DeRozan. They're both teammates after all and exceptional players. It just appears that the league is still viewing Lowry through a Memphis or Houston lens unfortunately.  This wasn't the "All-Character Team," where I could understand the snub.  This should have been based on a multitude of factors, from statistics to simply watching the man play.

To add, RaptorsRepublic.com's William Lou suggest that while Lowry and DeMar have played better than a ton of players in the league, they're virtually unknown to NBA fans outside of Canada despite their vital contributions to the team. As well they aren't the most popular players in the league either whereas Washington Wizards' guard John Wall, Lillard and Cleveland Cavaliers' Kyrie Irving have a much better public profile boosting their popularity. DeMar and Kyle only have their own fans, statistics and supporters to back up their cases.

Picking on Lillard and Parker for a second, Lillard had a better cast of players on his team overall. He was unbelievably clutch when it mattered but as the stats suggest, he wasn't as great of a player overall as Lowry.  The graphs below by signandtrade.com, using their player comparison tool, do a nice job comparing the two players: 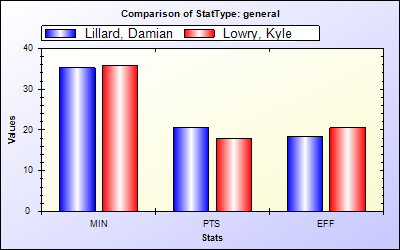 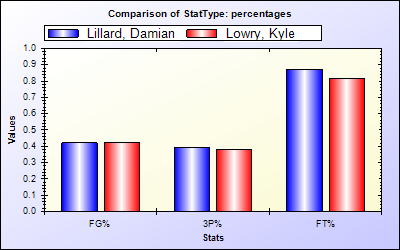 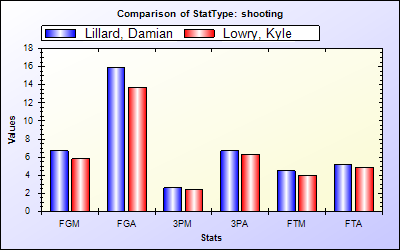 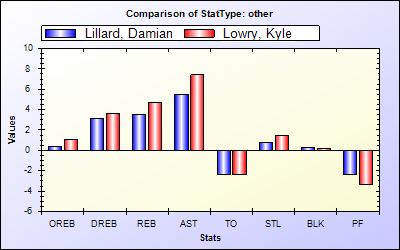 As for Lowry, he had a better player efficiency mark, played more minutes, had more offensive, defensive and total rebounds, more steals and more assists. Again, Lowry was simply the more well-rounded individual.

Turning to Tony Parker, he missed a ton of time during the regular season which should have benefited Lowry's case. This was not the case, and San Antonio's excellence, even without Parker, likely helped boost his overall perception. You could argue the Parker vote was also a bit of a legacy one, considering the level he's been playing at for the past decade or so.

Another guard who had more votes than Lowry was John Wall. Wall received 70 total votes, more than DeMar and Lowry. While he is more popular -- the Adidas deal helps -- his team performed worse than Toronto and he was less effective than Lowry.

According to the statistics conducted by basketball-reference, Wall played in all 82 games of the season starting all of them, made more shots with a better percentage, made more two pointers and scored more points than Lowry. However Kyle had more rebounds, a better three-point and two-point percentage, made more free throws with a greater free-throw percentage, obtained a superior true shooting percentage and had a much higher Player Efficiency Rating.

As the former number one pick in the 2010 NBA draft, everyone knew Wall was going to be good from the get-go and his on court flashyness, incredible quickness and ferocious dunks make him a popular name in the NBA market.

As stated above, statistics and production aren't everything. Commercial appeal and popularity play a factor as well. DeRozan and Lowry aren't the hottest ticket in town and don't have much recognition to their name while Lowry also has a poor reputation to carry around.

It's unfortunate that Lowry, despite playing superb for the whole season and through some inconvenient injuries always seemed to have his performance overshadowed but he can always use this as fuel and motivation going into next season to prove the doubters wrong and showcase what Raptors' fans have been accustomed to. He'll receive the recognition he deserves soon enough.