Despite loss to Nets, Raptors take big step back to NBA relevancy

Yesterday's loss to the Brooklyn Nets was a tough one to swallow, but as Adam Francis notes, it also marked a big step by the Toronto Raptors, back to NBA relevancy.

Share All sharing options for: Despite loss to Nets, Raptors take big step back to NBA relevancy

At around 1 AM last night I was listening to rapper Bun B talking to the crowd at the Hoxton about the Toronto Raptors.

"Ya'll have a great team, one that's on the rise," he said.  Or something to that effect.

Yes, the Toronto Raptors' Global Ambassador was on stage with him at that point so perhaps Big Bun felt he had to say something on the topic.  (Not to mention Patrick Patterson, chilling in the VIP section to the stage's right.)  But Bun's words didn't seem forced, and the whole scene struck me as yet another example of the impact the Raptors' series vs the Brooklyn Nets had on a city, and even a country to a lesser extent.  The Toronto Raptors may have been eliminated from the 2014 NBA Playoffs in heartbreaking fashion, but this was just the beginning.

And that's why when I woke up this morning, I didn't feel upset about yesterday afternoon's loss at all.

In many ways the club's goal was twofold this postseason, whether they realized it or not, and while the primary goal was certainly to advance in the post-season, the secondary goal was also of extreme importance for the franchise:

And there's no argument the club did just that.

Whether it was Masai Ujiri's F-bomb, Maple Leaf Square/Jurassic Park, or the series itself, a seven-game cardiac arrest that gripped you like a vice and refused to let go, this will not be forgotten.  The Toronto Raptors made their mark on this NBA post-season and now have a major platform from which to build on heading into the 2014 offseason. 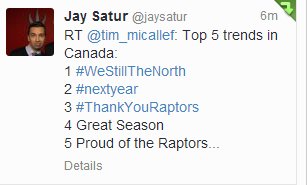 It's hard to think that the team could have done much more in a first-round series, other than obviously beating the Nets, and moving on to face LeBron James and former Raptor, Chris Bosh.

All of this is not to completely dismiss the heartache associated with yesterday's ending.  The Raptors were inches away from moving on, and were up 3 games to 2 in the series at one point.  It's a bit of a tough pill to swallow, especially considering the Nets lost games on purpose just to play the Raptors in the playoffs as their first-round opponent.

Their strategy worked - although it came a few Paul Pierce fingertips away from back-firing - and now the $190M basketball club from Brooklyn will head on to face the vaunted Heat.

The Raptors head into their off-season now, one that should prove to be very interesting. There are questions aplenty, especially surrounding the return of team-MVP Kyle Lowry and the club's head coach Dwane Casey, as well as an assortment of other decisions. There will be draft prospects to evaluate, free-agency targets to be wooed, and Drake lint rollers to produce.

But provided Lowry returns, the groundwork has been laid.  A replacement for John Salmons here, another year of experience for Terrence Ross and Jonas Valanciunas there, and in the East, we're talking about a club that can continue to not only make playoff appearances, but also advance.

It's a marked difference from the discussions we've had on the site around this time over the last five years or so and to say it's a refreshing change of scenery is akin to saying water is wet.

The Toronto Raptors may have lost to the Brooklyn Nets yesterday, but they won the hearts of fans and the respect of the league.  This was a team that never stopped fighting, backed by a city who reminded its Jurassic-themed franchise what level of support they could expect if something even close to a winning product was put on the court.

Masai Ujiri rearranged the tattered remnants of the Bryan Colangelo era and did just that, helping to turn a 34 win NBA afterthought, into a 48 win playoff team that nearly took down one the preseason's title favourites.

And that was all in Year 1.

So while yesterday's loss will weigh heavy on the hearts of myself and other Raptors' followers for quite some time, it's hard not to also be excited about the very near future of this franchise.

The Raptors and their fans came, saw, and ever so nearly conquered.