Raptors Should Look to Draft for Frontcourt Depth and Wing Help

Help is on the way this offseason. Could it come via the draft?

Share All sharing options for: Raptors Should Look to Draft for Frontcourt Depth and Wing Help

The high of the bittersweet Raptors season finally comes full circle as the team positions themselves to try to luck out in this season's 2014 NBA draft.

As questions still linger on whether or not to keep core players for another season, the Raps full focus now is on the draft as they try to bring in players who can either help the team for years to come, or become appealing to other teams in hopes of snagging a possible draft night trade.

This draft class brings the benefit of the doubt for the team in many ways. For the first time in a while, the Raptors are at the bottom end of the first round having the 20th overall pick, 37th pick and the 59th pick.

With those picks, the Raptors would be able to obtain good players and bring them along slowly, instead of hoping to get immediate impact from a potential franchise-changing rookie -- see Andrew Wiggins and Joel Embiid --. A  plus .500 ball club with playoffs aspirations, the Raptors need help if they hope to make it back into the playoffs race once again for a second consecutive year. This class will enable the team to add depth where they need it most.

Before they do that though, the Raptors first need to solve the point guard situation. With most indications looking like the Raps would re-sign Kyle Lowry and Mr. Vasquez, perhaps the club can afford to look for a third-stringer type in the second-round of the process that they can mould.

If they don't re-sign either one of those guards, or both, the Raps could possibly look to obtain a young, yet promising guard to lead the pack for next season. This however is problematic as the likelihood of a star studded point guard dropping down the ranks to the 20th pick seems unlikely as other teams more desperately need a point guard to help their expedited growth into the new season.

In other words by the time the 20th pick rolls around, all the best options will likely be long gone.

Furthermore take in consideration that Maple Leafs Sports and Entertainment president, Tim Leiweke, wants a championship contender so obtaining a young bright guard will set the club back a few years, as they'll have to wait for him to mature.

Progression, continuity, all words that resonate organic growth. The team obviously needs time to grow and improve during the off-season and while many may say all they need is time to develop to reach contender status, any indication of that is insubordinate.

National Post writer Eric Koreen accentuates this saying any belief the Raps just need time in a so-called development oven to become contenders is somewhat faulty.  He continues writing that even with time to evolve, the Raps need more than just time to be where they want and need to be.

A strong emphasis on continuity, the Raps will most likely go into this draft looking for a player to play perimeter defense and/or add depth to the 3-4 spots on the team, considering how hard getting a competent big man is nowadays.

The depth chart illustrated below, from RealGM.com, shows how vulnerable the Raptors are in the frontcourt so adding a strong, versatile big man in the front could help tremendously going forward into the new season. 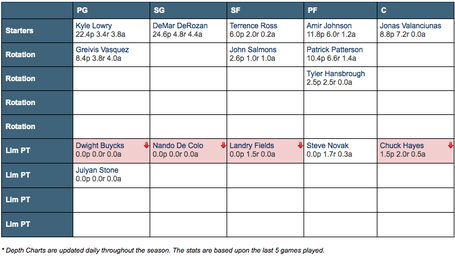 From an observational standpoint, it's fair to say the Raptors wing players have shown a tendency to carry much of the offensive load.  DeMar DeRozan and Kyle Lowry averaged roughly 46 points a game combined while Amir Johnson, Jonas Valanciunas and Patrick Patterson averaged approximately 30 points altogether.

While JV, Patterson and Amir have been able to have a strong defensive impact for the Dinos, they've at times been injured and sidelined for brief stints during the regular season. As well big Val, who is still learning to adjust to the NBA game, has been bothered in the paint by other ferocious NBA bigs such as Roy Hibbert and Joakim Noah. At this stage of his development he's still learning the finer nuances of the game, and commits meaningless fouls and turnovers.

This is why Toronto needs size in the frontcourt so the three bigs -- Amir, JV and Patt -- can continue to dominate, while not having to play tons of heavy minutes down the stretch.  Some help behind them could allow each to focus more on the defensive end of the court as well.

By no means is their defense horrible though.  According to NBA.com, the team averaged 4.1 blocks, 7.0 steals, 42.0 rebounds -- 10.6 of which were offensive -- per game, possessed a rebounding percentage of  50.9 percent -- fifth best in their conference -- and had a defensive rebounding rating of 101.2

However their defense in the paint wasn't so stellar in the postseason. During the playoffs series against the Brooklyn Nets, Toronto allowed the former New Jerseyan team to allocated for 50.5% of their shots in the painted area, making 50 of 99 makes within there.

Most of this can be attributed to the fact Andray Blatche, Joe Johnson, Mason Plumlee and Kevin Garnett had their way against the weaker Johnson, Jonas, DeMar and Terrence Ross however for a defensive orientated team, Toronto should've shown much more aggression when guarding with their backs against the net.

In terms of Garnett versus Big Val, Benny Nadeau of The Brooklyn Game wrote about how the inexperience Jonas faired with the veteran Garnett calling the matchup dead even.

The graph below illustrates how well the Nets can hold their opponents to fewer buckets, had Garnett played for a whole season healthy. 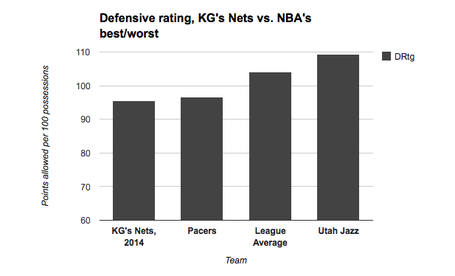 In correlation to Toronto, the interesting thing about this is Nadeau writes that the Raps, who had the ninth-best defense in the NBA for the season are slightly worse defensively with JV on the floor while offensively they're better with him on it.

In hindsight JV can keep KG out of his way and score multiple points, possessing an array of offensive weaponry, however Garnett's IQ and experience somewhat counteracts that.

Nadeau however notes that had Garnett been healthy and not an aging big with back problems, JV would've been in for a rude awakening.

This is why the Raptors need to add some depth. While JV excels in digging in the low post, he needs to add more mass to his frame and work on his skillset. During an intense playoffs run, the Raps could use another big body to hold down the fort and attack the rim while JV or Amir have ample time to rest.

As the illustration below shows -- H/T: @DamianTrillard -- JV tried to come into the paint and defend Garnett however he was a bit too slow. This gave Garnett ample time to change position, face the smaller Terrence Ross and pass to the open Joe Johnson. 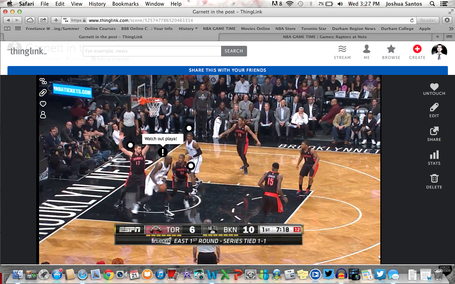 While this is a small sample, there have been tons of times where a situation like this has occurred during the regular season. Where Valancuinas came up short, needed another big in the paint with him or where he was exhausted from playing tons of minutes down the stretch (he averaged 28.6 minutes per game during the post-season and 28.2 during the regular season, according to ESPN.com). 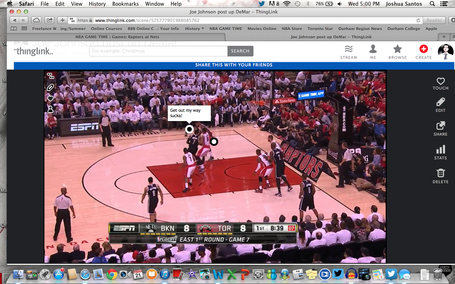 Another troublesome concern for the Raps was how weak-bodied DeMar and Ross went up against Joe Johnson, Carmelo Anthony, LeBron James; heavier and stronger forwards. In the example above, the 6'7" 240 pound Johnson had his way in the paint against the 216 pound DeMar, as he had no problem connecting the basket. A heavier small forward would've been helpful in situation as DeMar would've been able to guard a player more suitable to him, such as Alan Anderson.

To conclude the Raptors need a stretch 4-5 for various reasons. While Johnson, Patt and JV are constantly playing heavy minutes they've become prone to injuries. As such the Raptors have had to rely on the only big they have left in Tyler Hansbrough, who to no surprise wasn't really the answer.

They need a strong, bulky and lengthy big who can carry some of the offensive load at the beginning, and attack the rim while at the same time guarding Joe Johnson type of players, who constantly run over DeMar and Ross. If there's one thing the Raps missed in the playoffs, it was a player who can get physical against these types of foes.

This has even become apparent to the experts as ESPN's Israel Gutierrez writes that the Raptors could be one move away from making the leap to contender status. A bold statement that nobody would ever thought would be uttered five or even two years ago, and that move, could come via the draft.