The Raptors are in Brooklyn looking to win a series for only the second time ever.

After the insanity of Game 5, the prospect of closing out the series on the road is almost comforting. In Brooklyn the ghosts of failures past won't be looming over the court like a haze of cigarette smoke. There won't be 20,000 fans slowly shrinking into their seats with every Joe Johnson floater. Tonight, there won't be any pressure.

Well, that's not quite true. Pressure is inevitable at this point, but it won't be the kind of soul-crushing pressure that gripped the Air Canada Centre in a long, cold embrace during the fourth quarter of Game 5. No, tonight the pressure falls squarely on the Nets, who hope to continue their $100 million experiment for at least one more game.

The Raptors have already won at the Barclays Center, 87-79 in Game 4. If they can do it again tonight, they'll be off to Miami for a date with the Heatles on Sunday. Here are five big questions heading into tonight's game:

To say Kevin Garnett is a shell of his former self would be an insult to shells. He's more of a dried, decaying husk at this point, and the basketball fan inside me is a little sad to see it. Jason Kidd seems to have figured it out too, as Garnett played only 12 minutes in Game 5, none in the pivotal fourth quarter. Kidd opted for Andray Blatche instead, which says all you need to know about The Big Ticket at this point. Garnett hasn't played more than 22 minutes so far in the series and that probably won't change in Game 6.

Pierce is a different story. Like Garnett, he didn't play at all in the fourth quarter of Game 5, though that probably had more to do with Kidd sticking with a hot lineup than anything else. Pierce remains a terrifying late-game presence and a matchup nightmare for the Raptors, though he's no longer capable of sustained scoring binges over a whole quarter or half.

Even so, I'd be surprised if we don't hear from Pierce in Game 6. Garnett? Don't count on it.

What to do about Joe?

There are no easy answers. After neutralizing Johnson in Game 4, the Raptors let Iso-Joe get loose for 30 points on 13-23 shooting in Game 5. As John Schuhmann of NBA.com noted after Game 5, the Nets did a great job getting Johnson the ball at "the nail", or middle of the foul line. This gives Johnson the option to drive in either direction and makes it more difficult for the Raptors to double. Here's an example from late in the game: 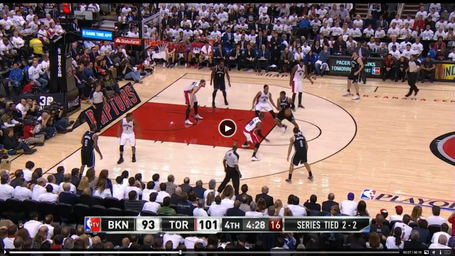 Johnson has just come off a simple pindown from Blatche and is in a threatening position. Ross and Johnson can't help off of the shooters and DeRozan is already a step behind, allowing Johnson to attack him off the dribble and get an easy layup. The Raptors must avoid these situations as much as possible tonight.

I'm not sure there's much the Raptors can do about Johnson at this point. Playing Landry Fields or John Salmons on him sacrifices too much offensive punch and spacing, while DeMar DeRozan and Terrence Ross are both too slight to keep Johnson out of the lane. The goal should be to keep Johnson out of the lane and send quick, aggressive double teams if he does. If a double is sent, the other defenders must be prepared to rotate hard to shooters, especially Pierce and Mirza Teletovic, who made four threes in Game 5.

Terrence? Is that you?

I'm not sure I've ever seen an NBA player look as sad as Terrence Ross did during the first half of Game 5. Every shot he missed seemed like a real psychological blow, complete with sagging shoulders and the general air of an abused puppy.

When Ross hit a corner three with less than a minute left in the first half, that woeful body language mostly disappeared. He hit another three in the second half and even got an easy layup, finishing with eight points in a series-best 28 minutes. It was a major development, because Ross' absence over the first four games cramped the Raptors' spacing and forced Dwane Casey to turn to Salmons, a complete non-threat on offense. If Ross, who made 161 threes this season, can rediscover his stroke and his confidence, it changes how the Nets play defense and should offer better driving lanes for Lowry and DeRozan. Here's an example of how the Nets have been effectively ignoring Ross on the perimeter: 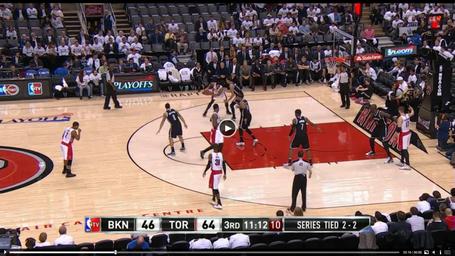 Ross is effectively one pass away here, yet his man (Johnson) is standing just outside the lane. The opportunities are there for Ross to have a big game. If he can build off his performance in Game 5, he could play a huge role in determining the outcome of Game 6.

The Raptors killed themselves with turnovers during the first three games of the series, but only coughed the ball up 21 times in Games 4 and 5 combined. The Nets have been one of the league's best at forcing turnovers all season, and if the Raptors can avoid that they stand a good chance of closing the series out tonight.

Avoiding turnovers means moving the ball quickly against Brooklyn's aggressive pick-and-roll coverages, especially for weaker ball handlers like DeRozan. DeMar has a tendency to hesitate at times and can get himself caught in sticky situations like this: 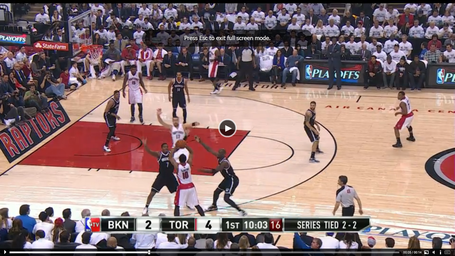 Garnett has blitzed a DeRozan-Valanciunas pick-and-roll to double the ballhandler in a tough spot along the sideline. First, DeRozan needs to avoid being in this spot on the court in the first place. Second, he needs to either get the ball to Valanciunas right away or dribble toward halfcourt and away from pressure. Instead, he held the ball for a second too long and lofted a soft pass that Johnson stole.

Maximizing each and every possession will be critical. Wasting them with turnovers is a sure path to defeat.

Let's be honest. Adjustments and role players matter, but in the end it's Kyle Lowry who will determine whether or not the Raptors close out the series tonight. To the relief of everyone in Canada, Lowry's knee looked much improved in Game 5. There was no noticeable limp and he got into the lane with his usual quickness and burst. To prove the point, he put Deron Williams on skates during the most important possession of the game:

Lowry has dominated the Williams matchup and, with the possible exception of Joe Johnson, has been the best player in the series. If he's the best player tonight, the Raptors will have a great chance of winning a playoff series for only the second time in franchise history.