All the Raptors' news you can handle while you chow down.

It's been a while so figured we should bust out an edition of Lunchbox Links considering the off day for the Raptors.

Let's start with the bad news first which obviously involves Jonas Valanciunas, and last night's news that he was charged for driving under the influence. Valanciunas has already apologized in a statement released by the team, but this may have further repercussions.  The NBA has suspended players and coaches who have been convicted of this offence in the past, so it's not unlikely that JV misses a game or two at the beginning of next season.

He's about to chat with a few members of the media right about now actually... 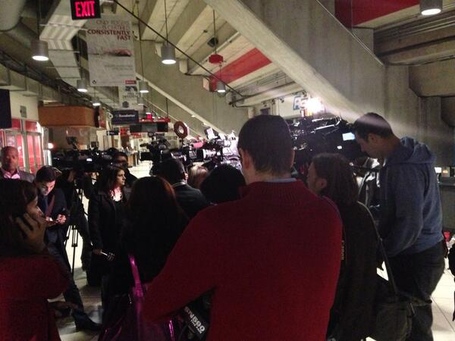 On a happier note, the Raptors are indeed getting close to a franchise-best mark in wins, and that's brought some much needed media attention to the squad.  Recently both Masai Ujiri and Tim Leiweke chatted with George Stroumboulopoulos via his CBC TV show, providing an interesting look at two of the franchise's key decision makers.

Some more media attention though is hopefully on the way as indeed, despite their recent success, the Raptors are still nowhere near the media darlings of Toronto.  That title still belongs to the Leafs and Raptors' fans are not exactly happy about it, especially considering the Leafs' dismal play to end the season.  In fact, Sportsnet.ca's Michael Grange even goes so far as arguing that the Leafs need to be a lot more like the Raptors! Imagine this idea even six months ago?

Maybe this is Drake's doing?!

No...it's more likely Amir Johnson, advanced analytics superstar.  Johnson and Kyle Lowry both are in contention for the GotBuckets All-NBA teams, and both measure up pretty well in terms of the new "Real Plus-Minus" statistic. Amir comes in at number 12 on the list and Lowry, number 32.

Amir was also a recent subject of Paul Flannery's Sunday Shootaround for SB Nation, a beautiful piece that takes a closer look at the "improbable, grizzled vet."

Finally, a few humourous links to take us out.

First, the Extra Mustard crew chats with Patrick Patterson over a friendly game of FIFA 2014, and second...awesome that DeMar DeRozan was asked to throw out the first pitch this weekend vs the Yankees but um...let's hope he sticks to attacking the basket.