Based on a slew of data, I take a dive into some of the interesting story-lines from the Raptors vs Nets playoff series so far.

Share All sharing options for: 5 Data-Driven Narratives So Far From Raptors vs Nets Playoff Series

To that end, we bring you, five data-driven narratives from the series so far.

1)  Neither team is hitting shots, especially open ones.

When two of the league's better defensive teams locked in for battle, you knew it would be a grind at times in terms of scoring.  But this?  Of the 16 current NBA playoff teams, (including the recently eliminated Bobcats), the Nets and Raptors rank 14th and 15th respectively in terms of field goals made.  Only the Atlanta Hawks have fewer, but that's been supplanted by the fact that they're making 11.8 three-pointers per contest, by far the highest mark of the playoff clubs.

No matter the offensive metric in fact, the Raps and Nets rank at, or near the very bottom of the playoff ladder.

And it's not just any-old shot that both teams are missing on.  It's open ones too.  As detailed yesterday by John Schuhmann of NBA.com, both clubs shot solid percentages on open jump shots during the regular season but in the playoffs, not so much...

Anyone in the Nets-Raptors series want to make an open shot? pic.twitter.com/QpnLVuXaSD

2)  But, both clubs are getting to the free throw line.

The exception to the previously described offensive malaise is at the free throw line.  So far in this series, Brooklyn is attempting 30 free-throws a game on average so far in the series and the Raptors aren't far behind, averaging 28.5.  This puts the teams in the top five of playoff clubs in this category.

The Dinos however have taken an advantage in terms of knocking said freebies down though, hitting 83 per cent of their free-throw attempts while Brooklyn has hit on only 74 per cent.  (Also, that 83 per cent mark is second to only Oklahoma City, who's shooting 84 per cent.)

3)  The Raptors' offense has been fairly motion-less. (Although did it have much motion to begin with?)

The death of Toronto's offense has been discussed by media scribes in this series, and there's no question Toronto has been more effective vs Brooklyn when their offense generates more motion in its sets, primarily off of some form of pick-and-roll attack.

RaptorsRepublic's Blake Murphy does a bang-up job going into the details of the P-n-R's importance in his post this morning, including some very interesting data regarding its effectiveness for the Raptors during the regular season.  If Toronto can ramp up this type of attack, it should pay dividends.

The two aren't perfectly intertwined but it should be noted that the Raptors are not a great "motion" team to being with, something illustrated here in a study by the Harvard Sports Analysis Collective. The Dinos were in the league's bottom tier, though it should be noted that a chunk of that included the Rudy Gay era, and this series has shown a regression to some of that Rudy-era style offensive play.

How to get more motion?  By spacing the floor and putting the ball in the hands of the club's best creators.  That means I'm hoping to see Dwane Casey play Kyle Lowry and Greivis Vasquez as much as humanly possible going forward.  This should have a two-pronged effect in that it will allow two very good pick-and-roll conductors to maximize this type of attack, and it should return DeMar DeRozan to more of a scoring role.  Despite strides made in the area of facilitation this season, DeRozan is still not a great creator off the bounce and at times in this series, especially Game 3, DeRozan has tried to run the show, resulting in a lot of forced shots and inefficient isolation situations.

4)  The Raptors giveth and taketh away.

They've done some of that this series, totaling 44 offensive rebounds to Brooklyn's 31, and the Raps' 28.9 per cent offensive rebounding percentage is fifth-best in the playoffs at present.

But not only did I expect a more dominant performance in this area, but a good chunk of the Raptors' offensive rebounding advantage has been given right back to Brooklyn thanks to an average of 19.1 turnovers per 100 possessions.  That rate is only a shade behind Golden State, a club that plays at a much faster pace, in terms of the worst mark of the playoffs and more importantly, the Raps have given up on average nearly 16 points per game in the series off these cough-ups.

Even cutting that 16 points in half would make a huge difference considering how close this series has been.

5)  The Raptors shot selection in playoffs vs regular season has been fairly consistent, but shot makes, especially from long-range have certainly not.

Looking at NBA.com's shot charts for the Raptors and doing a bit of math, I broke the data down based on NBA.com's six basic zones:

During the regular season, 28 per cent of Toronto's shots came in that rim area, whereas in the playoffs, that's actually been upped to 30 per cent.  This surprised me as even with a slower pace (the Raptors are averaging about 91 possessions per game, down from their regular season average of about 94), and as discussed, less frequent pick-and-roll action, Toronto is actually getting more shots in this area.  Some is likely explained by offensive rebounding put-backs in the vicinity, but the takeaway here is that there really isn't a big difference in attempts, counter to what one might have expected.

The same is true for the other areas on the court.

The one slight difference is regarding that mid-range area.  During the regular season, 24 per cent of Toronto's shot attempts fell in that range but versus the Nets, that's been upped to 27 per cent.  (Something the Nets' defensive style likely has a good chunk to do with.)

The real differences lie not in the types of shots taken, but the number of makes obviously.

Simply put, and as the images from NBA.com below illustrate, the Raptors have been average in terms of shot making from everywhere inside the arc, but outside of it, they've struggled. 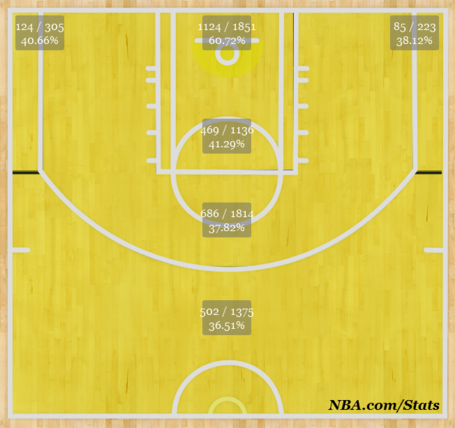 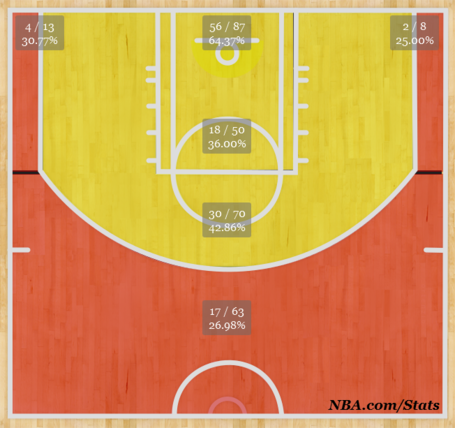 And as noted above, it's not as if the Raptors haven't had open looks.

They just need to start knocking some of these down.