It's Game 1 of the Toronto Raptors vs Brooklyn Nets and the HQ has you covered via it's giant Game 1 preview.

After over half a decade of fairly meaningless regular season basketball, this morning feel pretty exciting no?

The sun is shining here in Toronto, the birds are singing, and The Toronto Sun released one of the greatest trolling jobs ever: 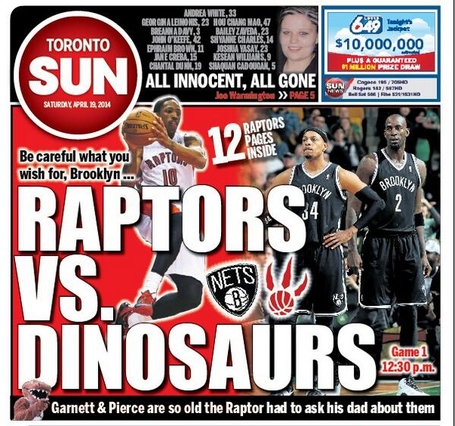 Not too shabby Sun, we'll see how the New York Post responds.

To kick off our preview of this afternoon's match, a little roundtable action.  Myself and HQers Zach Salzmann and Braedon Clark throw the ball around regarding the upcoming series and all are in agreement regarding the eventual outcome:

Franchise: Ok so the Nets definitely tanked to get the match-up with the Raptors right??

Zach: Yeah, I think that much was fairly obvious. Losing 4 of their final 5 games, resting key guys, and giving Jason Collins more minutes against the Cavs than he's had in a decade. Obviously Jason Kidd feels like the Raps' inexperience, and his team's experience, gives them a real advantage in the series. But I also think that the fear of playing the Bulls plays a big part. Their match-up tanking was just as much about avoiding Chicago, as it was about wanting to play the Raps.

Braedon: As Zach said, it's pretty clear the Nets wanted to play the Raptors, though I think it might turn out to be a shortsighted strategy. Even if they do manage to get past Toronto, why willingly put yourselves against the Heat in Round 2? I know Brooklyn swept Miami in the regular season, but all of the games were extremely close and the Heat will be a different animal in the playoffs. If I were the Nets, a path to the conference finals of Bulls - Pacers seems better than Raptors - Heat, but what do I know? I think the Nets are suffering from an extreme case of overconfidence. Let's see if it comes back to bite them.

Zach: I agree with Braedon -- the Nets might be getting caught up in a classic case of hubris. Teams like Miami and San Antonio can just turn the switch back on, so to speak -- and obviously guys like Pierce and Garnett have tons of successful playoff  experience. But the likes of Deron Williams, Joe Johnson, and the rest of the rotation guys haven't exactly lit the world on fire in the post-season throughout their careers. I think the experience factor, as it relates to Brooklyn, is a little overblown

Franchise: So the million dollar question, do you think it DOES come back to bite them regarding the Raptors?  Give me your prediction on the series.

Braedon: I fully expect this to be a long and competitive series, and I also expect that most people will pick the Nets to win, largely on the basis of the massive experience gap between the teams. That's a very real concern, but I also think that the Raptors are genuinely better than the Nets on both sides of the ball and will have the best player in the series in Kyle Lowry.

I'll be closely watching to see how the Raptors react to the Nets' version of smallball, with Paul Pierce at the 4. Will Toronto stay with Amir Johnson/Patrick Patterson at that spot, or downsize and try to match up? How will DeMar DeRozan handle the Nets' size on the perimeter and will he able to draw fouls as consistently as he did during the regular season? Can Jonas Valanciunas dominate the frontcourt battle and will Terrence Ross be able to contain Joe Johnson while scoring on the other end?
Don't be surprised if we see a lot of Lowry and Greivis Vasquez in two-guard lineups to match up with Deron Williams and Shaun Livingston. I'm hoping that means less John Salmons, who really hasn't helped in two months. Other than Vasquez and Patterson, nobody on the Raptors' bench should play more than a handful of minutes per game in this series. Tighten your rotation and trust the guys who got you here, Dwane.

Ok, I'm stalling because I hate making predictions. If I must, I'll go with Raptors in 7. Of course, that means it could go either way, but I do think the Raptors' overall edge in talent will win out over the Nets' experience edge. Either way, it's going to be fun.

Zach: I'm going to say Raps in 7--it'll be long and tough. I'm worried about the Nets' size and length -- they're huge at the guard positions and could give Lowry and DeRozan problems when they post-up. I'm also concerned about the Raps' execution if the games come down to the wire. They haven't been great late, in close games. No DeRozan, final possession iso ball, please.

But as I said, I think the Nets' experience, as a deciding factor, is a little overblown. They're a poor rebounding team and the Raps should be able to control the glass. Also, the Raps have a major athleticism advantage, and if Lowry and DeRozan attack the heart of the Nets' defense, and get to the line, they could cause some damage in the series.

Franchise: I don't really believe in the Nets, despite their terrific second-half.  They finished 14th in offensive efficiency and only 19th in defensive efficiency, don't create second-chance opportunities via rebounding (fourth-worst offensive rebounding rate in the league), and aren't even that great at taking care of the ball (14.1 turnovers per game, one of the weaker marks in the Association.)  Like both of you, I feel the "experience" piece is overblown, and to me, this series is going to come down to who simply does a better job executing their style of basketball...and how good the Raptors defence is.

Am I the only one worried about how porous the D looked in the final weeks of the regular season?

Zach: No, the defense has definitely been an issue. The Raps finished up 9 in defensive efficiency, but they definitely weren't playing like it in those last couple weeks. Obviously Amir's absence was a big part of the Raps looking shaky--he's the the engine of the team's defense.

The good thing about playing the Nets from a defensive standpoint is that they don't run a lot of pick-n-roll, so Jonas, who looks shaky defending in space at times, won't have to worry about getting caught in the two-man game. Where they could expose the Raps is on post-ups, with their big guards. Also, Pierce is going to be a problem playing at the 4 and pulling Amir away from the paint. The help defense is going to have to be on point if Pierce is able to blow by Amir on the perimeter.

Like you mentioned, a big key for the Raps is going to be whether they can impose themselves on the Nets in the series. The Raps have played at a slow pace all season long, but I really hope that they try to make the most of their speed and athleticism advantage. With a few exceptions, the Nets are fairly creaky and cumbersome, and I really feel that the likes of Ross, DeRozan and Lowry can give their defense fits if they push the ball and attack the rim.

Franchise: Zach you mentioned the Pierce/Amir matchup and to me, that's the key to the series in a way.  If the Raptors can answer the Nets' small-ball lineups, or take advantage of them via Valanciunas and co dominating inside, then the Dinos will be fine.  If not...well...

Final thoughts then?  X Factor for both clubs?  Who wins Game 1 today?

I'm going with the Raps today, and I think Valanciunas will be the X factor throughout the series for Toronto.  If he plays at a high level, the Nets are in trouble.  For the Nets, my X-Factor pick is Pierce.

Zach: Agreed. Valanciunas is a huge x-factor for the Raptors. If he can occupy the Nets inside, and dominate the glass (again, the Nets are a bad defensive rebounding team) it'll open up the floor for everyone.

He's been the proverbial whipping boy -- a deservedly so --  but John Salmons is another interesting x-factor. I have a feeling -- love it or hate it -- that Casey's going to lean on him a bit. To be fair, he plays better when he gets rest between games, and there are no back-to-backs in the playoffs. If he can play solid defense on Pierce or Joe Johnson, that could be huge for the Raps.

As far as an Nets x-factor goes, I'm going with Andrei Kirilenko -- and not just because he wants to open a Hooters in Moscow. He hasn't played much this year, but if he's ready to go, he provides so many match-up issues with his size and length. He can do a bit of everything on offense, and defensively he'll give DeRozan or Ross fits if he's matched-up on them at any point.

Braedon: I think this series will be an interesting case study of talent vs. experience. To me the Raptors are a better team on both sides of the ball, but the Nets have a huge experience edge and it will be fascinating to see if that can make up for what I see as a talent gap.

My X factor for this series is Kevin Garnett. He had by far the worst season of his career this year and it's unclear if he's washed up or being properly conserved a la the Spurs guys. He played 30 minutes or more only once this season, but if he can give the Nets 24-30 minutes of Garnett-level defence and trash talk every night, it will make a huge difference. Mason Plumlee and Andray Blatche are reasonable options in Garnett's stead, but the Big Ticket is irreplacable in many ways. If Garnett can turn back the clock by even 18 months and do what he did his last season in Boston, the Nets will win. If not, the Raptors will dominate inside and win the series.

THREE IN THE KEY

How do the Raptors grab Game 1?  Here are our three keys to today's match:

1)  Jonas Valanciunas: For the Dinos to win today and more importantly, to capture the series, we feel Jonas needs to make his presence known.  If he's getting touches, being active in the paint, and scoring down low, it may force the Nets out of their "small-ball" lineups, giving Toronto a major advantage.

...one of the problems with facing the Nets is that their big guard lineups can cause mismatches all over the court. Pierce, Johnson, Livingston, even Deron Williams will look to post up smaller opponents, leading to double-teams and open long-range looks (and Brooklyn ain't afraid to let them fly) if Toronto doesn't have a counter.

3)  DeMar DeRozan: The Nets will be throwing all sorts of defenders at DeRozan, many, like Alan Anderson, who will be very familiar with guarding Toronto's lone All-Star, and who won't be afraid to get physical in the process.  One of the big factors in the series will be DeRozan's play as the Raptors first or second scoring option.  If he struggles, the Dinos may find themselves unable to keep up with the Nets offensively.

Other points of interest:

-Amir Johnson's health: While this falls under our second key to a certain extent, how Amir plays in this series overall, not just on D, will be a big factor in which team advances to the next round.

-Refereeing: The Nets are one of the best in the league at getting to the free throw line and their aggressiveness will force the refs to blow the whistle in this series.  The Raptors need to respond in kind.

-KG: Will we see a more like the Celtics-ish version of The Big Ticket or the one who looked like he should be backing up Mr. Plumlee?

-Jason Kidd vs Dwane Casey: Student vs Teacher, who does the better job of moving the chess pieces?