From Manhattan to Brooklyn: Raptors lose to Knicks tonight to end regular season and now must prep to head across the bridge to face Nets in the first round of the playoffs.

The Toronto Raptors dropped their final regular season game tonight to the New York Knicks by a final score of 95 to 92. The Raptors finish the season with 48 wins and now prepare for the first-round of the NBA playoffs while the New York Knicks have a long six months ahead of them before next season.

No need to go too in depth on this one as New York gets the win due to the lack of playing time from Toronto's key players. Once it was clear that Toronto had clinched the third spot in the Eastern Conference -towards the end of the third quarter we found out the Chicago Bulls had lost their final game, meaning Toronto nabbed third- Raptors' coach Dwane Casey pulled his top troops and elected to go with Nando De Colo, Dwight Buycks, Steve Novak, Patrick Patterson and Chuck Hayes down the stretch.

And that was enough for New York, down 57 to 44 at the half, to climb all the way back for the win.

In fairness, some of the Knicks' comeback came early in the third quarter when Kyle Lowry and other starters were still in the game. New York used a 30 to 17 third Q to get back in this one and while the game mattered little in the end, periods like these will likely give Casey and his staff a lot of reason to get in the video room prior to the start of the playoffs.

...which start on Saturday.

Yes, the schedule is set and thanks to an interesting few losses by the Brooklyn Nets, the Toronto Raptors suddenly find themselves facing a off against the team from BKYN. Did the Nets want to play Toronto and purposely lose four of their last five games? Well if you saw any of tonight's starter-less display vs the Cavs, you'd be hard-pressed not to think that something was up.

In any event, it's Raptors and Nets starting this Saturday although we don't know what time the game is yet. The Nets on paper are a fearsome foe and certainly have the playoff experience on their side, but the season series between these two clubs has been tight.

I'm looking forward to a close-fought affair and frankly, the playoffs will be a breath of fresh air considering the dregs the Raptors' played against down the stretch.

"Comment of the Night" goes to Jenge. He had a few nice ones tonight but this one cracked me up the most: 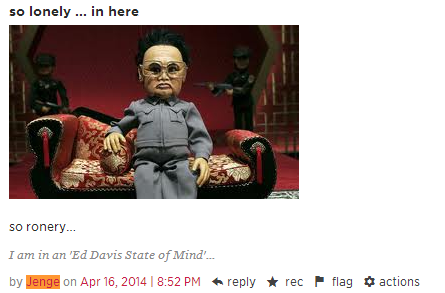 With the Raptors losing to a Knicks team that was also a fairly skeleton crew, how about a STUB OF THE NIGHT?

JR Smith may have had 30 points, but I'm handing the trophy out this evening to Cole Aldrich for his 13 points and SIXTEEN REBOUND performance in the paint!!!!

Bring on the playoffs!