The Toronto Raptors are in the D this afternoon to take on the Pistons, and look for a franchise-tying 47th win on the season.

Share All sharing options for: Raptors vs Pistons Gameday Preview: Three to Go...

The Toronto Raptors are back in action this afternoon as they hit the road making a brief stop in the Motor City capital of America, Detroit, taking on the Pistons.

Clinching the Atlantic division title on Friday -- Raps lost to New York, however Brooklyn lost to Atlanta -- the Raps look ahead to clean out their 82 games schedule as they prepare themselves for the battle that is the NBA playoffs.

While their next three opponents -- at Detroit, home against the Milwaukee Bucks and then another round with New York -- Dwane Casey may sit out some of his guys just as the Indiana Pacers and Miami Heat have been doing, so their starters get some much needed rest.

With the Pistons sporting a joyful 29 and 51 record, it may be advantageous for Toronto to sit some of its top players, as the bench may be all the Raps need to secure the win.  However despite Detroit's two game losing streak -- most recently a 106-98 loss to the Chicago Bulls -- the Pistons still pose a threat as sophomore center Andre Drummond has having his way with opponents, including a 26 points performance against said Bulls.

Nevertheless, this game shouldn't be worrisome for Raps fans, as the Dinos have won both games they've played against the Pistons thus far. Even with lingering injuries, Toronto should be able to complete the season series sweep against Detroit.

With the opportunity to tie the franchise record for wins during a season present at 47 and the chance to gain back the third seed in the Eastern Conference, Toronto shouldn't run into too many problems and should be able to get Sunday's win with ease. Here are our three keys to a Raptors win.

The Pistons most notable strength revolves around their two big men, Andre Drummond and Greg Monroe. According to basketballreference.com, Monroe and Drummond have been averaging a combined 23.4 rebounds per game. As well, they have been averaging a combined 28.5 points, contributing tremendously on the offensive and defensive end for the Pistons.

This is where Amir Johnson, Jonas Valancuinas and a healthy Patrick Patterson come in. Casey may not need to deploy all three guys on the court (Amir still looks like he could use some rest), but if they can hold down Drummond and Monroe, the Pistons will have to look elsewhere for scoring opportunities. It shouldn't be a problem though as during their most recent matchup about 42 days ago, Drummond only logged in 16 points with a -33 while Monroe only had 13 points on a -2 on the night.

If the Raptors can limit the scoring from Drummond and Monroe, the Pistons most likely will look around to outside shooters to score some buckets...shooters who haven't been playing very well the bulk of the season.

As Josh Smith sat out the game against Chicago suffering from a left patellar tendinitis -- ironically called jumpers knee -- he may also be inactive for this game against the Dinos, Toronto may have to take down Brandon Jennings, who unlike Smith is able to knock down his jumpers a little more effectively. During their most recent matchup, Jennings caught fire knocking down shot after shot as Harsh Dave noted in his rapid recap however it wasn't enough for the Pistons. During that game he led the team in scoring with 24 points and two assists, including an impressive 4-of-6 shooting display from three point land.

However despite Jennings' efficacy to shot long-range jumpers, he still has his flaws as his short chart illustrates below how ineffective he actually is below. 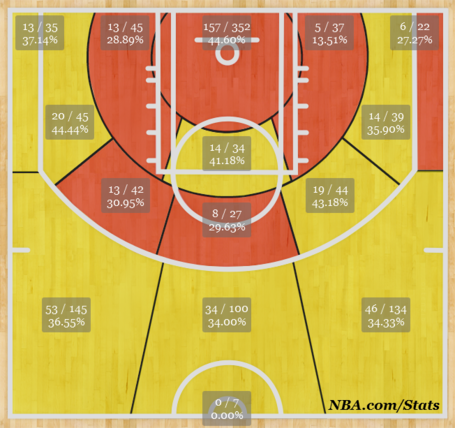 For this, Terrence Ross and Kyle Lowry will be called upon to put a hand in Jennings' face to force contested shots. If the Raptors can stop Detroit's bigs and put a hold on their leading scorer in Jennings, the Pistons should quickly run out of options.

During their last matchup with the Pistons, Toronto's bench was fairly ineffective. With Patrick Patterson inactive for a stretch of games, his importance on the bench was clearly seen, as Chuck Hayes, Tyler Hansbrough and Steve Novak weren't able to matchup well with Detroit's pine crew.

John Salmons was able to create shots on the wings and defend well but he wasn't able to help spacing all that well. With Patterson and healthy, Toronto may have a reliable bench in tow today, and may need to lean much more on them, especially if Casey sits some of his starters.