The Toronto Raptors took care of business against the Philadelphia 76ers but based on the other results last night, the Dinos may be facing the Charlotte Bobcats in the opening round of the NBA playoffs.

Here's my recap of last night's win by the Toronto Raptors over the Philadelphia 76ers:

In all seriousness, my man Harsh Dave did a bang-on job summarizing last night's 125 to 114 win so I'm not sure there's much more to be said about that one.

Let's talk more about the big picture for a minute this morning.

In the wake of last night's game, the Eastern Conference standings look like this: 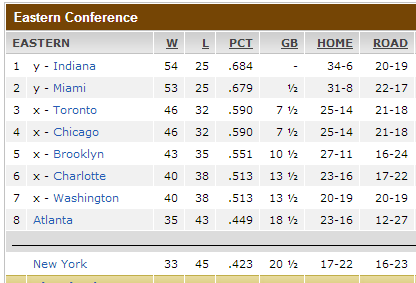 The Raps and Bulls are still neck-and-neck record-wise - both won last night - but with the Bulls sitting behind the Pacers in their own division, they're relegated to fourth place as of now.

The Nets somehow lost to the Magic last night, hence Toronto's "Magic Number" being reduced to one.

And Charlotte beat Washington...which causes all sorts of confusion. Mike Prada at BulletsForever.com does a great job going into the importance of last night's affair right here but essentially, if the Wizards had beaten the Bobcats, they'd have a two game lead over the 'Cats for sixth in the Conference. But the loss puts both clubs in a deadlock for sixth, and with the Bobcats owning the tie-breaker - they won the season series 3 games to 1 - suddenly the Wiz are in danger of facing the Heat or Pacers in Round 1 of the Playoffs, and the Raps might be facing off against a Bobcats' club that hasn't exactly been an easy foe for them this season.

Or the one before that.

So now, besides clinching the Atlantic to keep the Nets at bay, Toronto will also likely be doing some scoreboard watching to see how the Bobcats and Wizards are making out.

The 'Cats have four games left versus the Celtics, 76ers, Hawks and Bulls.

The Wiz have four as well versus the the Magic, the Bucks, the Heat and the Celtics.

So it's pretty easy to see that the...

My best guess is that both teams win at least two, maybe three of those games, which would keep the current tie situation and give the sixth playoff seed to the Bobcats. If you're ok with that and feel that a John Wall-led Wizards team is maybe more difficult of a foe than the Bobcats, all good.

But if you subscribe to the theory that Charlotte is a team that Toronto should look to avoid in the playoffs at all costs, than you want the Wizards to win one more game out of their final four contests than the Bobcats do.

Personally I'd rather the Raptors face the Wizards, so I'm crossing my fingers that the Heat clinch the conference's top spot by the time they play the Wiz, thus resting all their starters.

Who knows how this will turn out however so the Raptors will simply have to focus on winning their games, and frankly, tightening up what's been a fairly lax defence of late, as the playoffs draw ever closer.