3 in the Key: Pistons-Raptors Gameday Preview

The Raps look to bounce back from Monday night's tough loss in Brooklyn, when they welcome Andre Drummond and the Detroit Pistons tonight.

Share All sharing options for: 3 in the Key: Pistons-Raptors Gameday Preview

Monday night's loss against the Brooklyn Nets stung. The Raps had a chance to go up 5 games on the Nets, and to win a tie-breaker that would've all but ensured a second Atlantic Division title in franchise history. But alas, you can't win them all. The Raps still find themselves in an excellent position, however -- 3 games up on the Nets with 20 games left in the regular season. And they welcome a very beatable Detroit Pistons team to the ACC tonight.

In fact, along with tonight's game, the Raps, if they're the team we think they are, should win a large chunk of the remaining games on their schedule. 14 of their final 20 games, including tonight's, are against teams well below .500. The Raps play the Pistons, Celtics, Knicks, and Bucks twice, and they also have tilts coming against the 76ers and Magic. Hardly daunting.

One worry for the Raps, at least as it pertains to tonight's game and the next couple, is the absence of Patrick Patterson. Patterson has missed the last two games with a right ulnar collateral sprain (ouch), and although the team battled through to win in Minnesota, he was sorely missed in Brooklyn.

Patterson (incidentally, he hates the nickname 2Pat) has been a revelation since he arrived from Sacramento as part of the Rudy trade. As a Raptor, he's averaged 9 points and 5 rebounds per game (14 and 8, per 36 minutes), and has stretched the floor with some great 3-point shooting -- 44% from downtown since he's been in a Raptors uniform. Patterson's likely absence again tonight will mean extra minutes for Tyler Hansbrough, Chuck Hayes, and possibly Steve Novak as a small-ball 4.

While Patterson's absence is a worry, Raptors fans shouldn't be too worried about tonight's opponent. At 25-39 the Pistons (along with a huge chunk of the Eastern Conference, to be honest) have been a hot mess all season.

In the off-season we re-learned that nothing is more terrifying (or hilarious) than Joe Dumars with cap space -- add a 4 year, $56 million deal for Josh Smith to previous lowlights that include cap-crippling deals for Ben Gordon and Charlie Villanueva. For all his great early-tenure work as the G.M. of the Pistons, post-2007 Dumars has made inept decision after inept decision. Coach Mo Cheeks was the fall-guy earlier in the season, fired after just 50 games, but Dumars may have to finally fall on his sword once the off-season rolls around.

At this point in time the Pistons would be better off tanking the rest of the year and retaining their first-round pick -- they traded that first-rounder to the Bobcats, but it's top-8 protected. But with the Eastern Conference as it is, Detroit is just 3 games back of the 8th-seed Hawks; and with Dumars trying to save his job, the Pistons will be fighting for a final playoff seed, and a first-round shellacking at the hands of Indiana or Miami.

Here are 3 keys to tonight's match-up 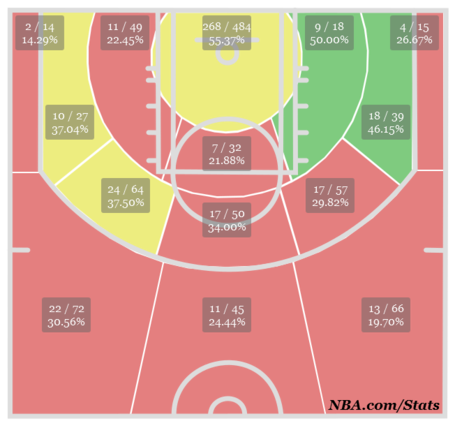 No, this isn't a murder scene; this is Josh Smith's shot-chart for the year. Gross. As you can see, Smith is both a very willing, and a very bad jump-shooter. Smith has jacked-up a career-high 212 3-pointers this season (we still have 20 games left) and is making a woeful 24% of them. And according to Basketball Reference's excellent shooting breakdowns, 20% of J-Smoove's shot attempts have been beyond the arc, and 22% have been taken in that dreaded 16-24 foot range -- by comparison, just 26% of his attempts have come at the rim, where he's really good. The is partly the result of Smith being forced to play large minutes at small-forward, but partly it's the result of him being infuriatingly stubborn when it comes to shot-slection.

It doesn't take much to tempt Smith into taking bad shots, but the Raps should be willing to give Smith enough proverbial rope to hang himself tonight -- sag off him a little, and definitely don't double him away from the basket. And hey, if he makes a couple long-range jumpers early, then fine. It will just encourage him to take more.

The Pistons don't do a lot of things well -- 20th in offensive efficiency, and 22nd in defensive efficiency are a testament to that -- but they are excellent on the boards. In fact, that Pistons have been one the best rebounding teams in the NBA this year, and are the best offensive rebounding team in the league by quite some way. The biggest reason for this: Andre Drummond. The second-year man has been mighty impressive -- averaging 13 points and 13 rebounds per game, and leading the league in offensive rebounds.

Jonas Valanciunas did an excellent job on Drummond in their first match-up this season (Drummond appears to be the only player willing to bite on Jonas' pump-fake) but he'll have his hands full again tonight. In recent weeks the Raps have given up far too many offensive rebounds, keeping opponents in games they have no business being in. Keeping Drummond off the offensive glass tonight, or at least slowing him down, will be key tonight.

Attack the Pistons with the pick-n-roll

While Drummond is a shot-blocking, rebounding phenomenon, like Jonas he's still learning the finer points to playing defense in the NBA. At times he can look like a giraffe on skates when forced to defend in space, and his front-court partner, the offensively-talented Greg Monroe, is a sieve at the defensive end.

If Kyle Lowry and Amir Johnson attack Monroe and Drummond in the two-man game they should reak plenty of havoc. The Pistons' communication is generally terrible and the Raps, whether it's open shots for Lowry, chances at the rim, or looks in the corners off a couple quick passes (Detroit is awful at rotating to shooters), should be able to get whatever they want off the pick-n-roll.