Raps fail to execute late in loss to Bulls

Questionable decision-making costs the Raptors in an important game with Chicago.

Share All sharing options for: Raps fail to execute late in loss to Bulls

Evaluating an NBA head coach solely on the basis of his tactical late-game strategy is a bit like judging the size of an iceberg by measuring only what you can see above the water; in both cases, there's a lot more hiding just below the surface.

Good coaching is about a million different things: managing personalities, policing the locker room and making good use of practice time, to name just a few. The X's-and-O's of the games themselves make up a relatively small part of a coach's job, although its importance and visibility makes it by far the most scrutinized aspect. Fans and media members don't enjoy the luxury of seeing how a coach interacts with his players in practice; how he handles the frustrations of a player who's fallen out of the rotation; how he works with his general manager. The obsession with tactics is probably a bit overblown, but it's the most available thing to focus on, and so we do.

We often judge a great deal of a coach's effectiveness by how well he calls plays out of a timeout. Gregg Popovich is a genius in this regard. Dwane Casey? It's one of the weaker parts of his coaching repertoire. For proof, look no further than last night's hard-fought 94-92 loss to the Chicago Bulls. After falling behind early, the Raptors fought back and found themselves with a good chance to win in the last few minutes. Toronto was on a back-to-back and the Bulls had been resting, waiting in Toronto while the Raptors took care of the Wizards the night before. The teams entered last night's game 1.5 games apart for the third seed in the Eastern Conference. If the Raptors won, they would have taken the season series 3-1, an important potential tiebreaker.

Alas, it was not to be, and one of the reasons why was abysmal play-calling. The Raptors called three timeouts in the last minute of the game, ostensibly to draw up a play that would give them a quality look at the basket. Here's the shot they got out of the first timeout: 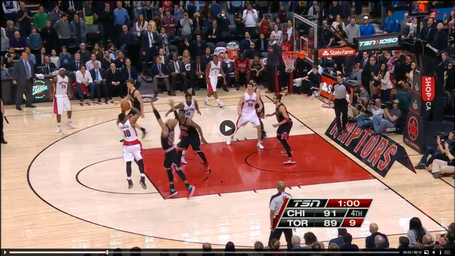 That's DeRozan taking an impossible step-back jumper over Taj Gibson. There are still nine seconds on the shot clock at this point. Total number of passes on this possession? One: the inbounds pass. I'm sure Casey didn't want DeRozan to take this specific shot, but the play appeared to be designed for a DeRozan isolation. It wouldn't be the last.

Here's the shot the Raptors got out of the second timeout they took, this time down four with 38 seconds to go: 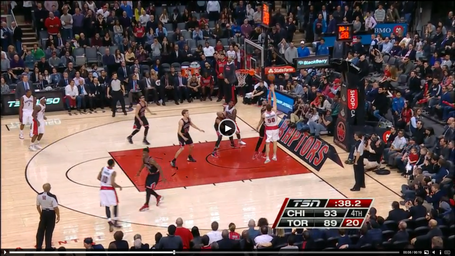 To be fair to Casey, I doubt this was the designed play call. After Hansbrough caught the ball on the inbounds pass, he apparently decided it would be a good idea to try and post up Joakim Noah. This play was only saved when Amir Johnson grabbed the inevitable offensive rebound and converted a three-point play, bringing the Raptors within one and setting up their final play after a timeout: 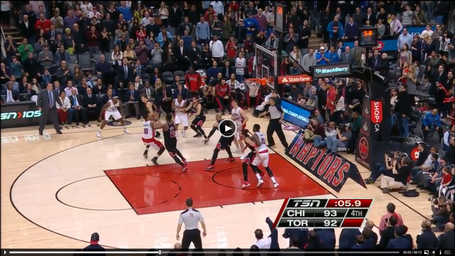 Sigh. This is DeRozan, moments before getting his shot blocked by Jimmy Butler to effectively seal the game. There's no doubt that DeRozan is a wonderful offensive player and a good shot creator, but putting him in a one-on-one situation with Butler, a great defender, is just not a great option. Again, this was clearly an isolation play out of the timeout. Number of passes on this possession? You guessed it: one.

What's perhaps most concerning is that Casey doesn't seem to have any problem with these sorts of shots. From the Toronto Star:

"Whether isolation plays are good or bad can, and will, be debated forever but the simple fact is that Toronto coach Dwane Casey was quite happy putting the ball in his all-star's hands and seeing what would occur."

What's also a simple fact is that isolation plays are usually some of the most inefficient in the game, and especially so against a set defense and one of the league's premier individual defenders. It's a recipe for inconsistent success, and it's not going to be good enough in the pressure cooker of a playoff series.

Casey does a lot of things well as a coach, but his lack of creativity in late-game situations isn't one of them. Let's hope that changes or there will be more endings like last night to come.