The Enigma That is Kyle Lowry

Share All sharing options for: The Enigma That is Kyle Lowry

Kyle Lowry was officially acquired by the Toronto Raptors a little over a year ago in exchange for Gary Forbes and a 2013 First-Round draft pick. Yes, the pick that eventually became part of the package that hauled in James Harden from Oklahoma City. Most fans envisioned Lowry as the successor to Alvin Williams, the bulldog point guard with tremendous defensive abilities, still highly revered around the city of Toronto. Lowry was on his third team in seven years amidst rumors of coachability issues, and the Raptors promised to be a rebirth for the Philly product.

Unfortunately as we all know, this wasn't the case. Lowry was injured sporadically throughout the season, not unlike many of his teammates incidentally, and his play as a point guard was called into question. Labels of him as a "chucker" were being thrown out by some in the media, even though he ultimately ended up with similar Assists-Per-Game and Assist Percentage stats from his previous two seasons.

From opening tip, the Raps had trouble acclimatizing their prized asset to the club while their former starting point guard, Jose Calderon, was still in tow. Lowry began the season as the starter and Jose led the second-unit, however that of course didn't last, Casey preferring Calderon's "steady-as-she-goes" style as the lead guard.

In addition, with Calderon starting on the second unit he produced a pretty bad net rating of -10.0 per NBA.com, while Lowry was a solid +5.2.

Those numbers don't tell the whole story of course. Toronto's offence always ran much more smoothly with Calderon in charge as ball movement was maximized using his skill set. To keep this piece but include Lowry in the mix as well, Toronto even tried pairing the two together with mixed results. The duo posted a porous defensive rating of 114.3 per NBA.com, ranking 15th among two-man combinations that the Raps trotted out last season. That pairing ultimately didn't last, the duo's inability to guard pick-and-rolls and opposing team's shooting guards being the main downfall for an already below-average defensive squad.

We know how the story went from here. The Raps ultimately went with Lowry as their starting PG, dealing Calderon to Memphis as part of the Rudy Gay transaction. Lowry was ok as the starter from then on out, but was certainly not the near-All-Star many had originally envisioned. Going into this season, Lowry is again the defacto top gun, but there's no certainty he'll remain in that spot. Masai Ujiri will take his time evaluating his roster's performance as the season unfolds but Lowry, like Andrea Bargnani, could find himself playing for another club by the NBA's trade deadline.

Part of the issue with Lowry was his style of play, which at times could be a breath of fresh air for a historically "laissez-faire" bunch, and at others, what one might call "ill-advised." Here are a few examples:

This play started as a simple high PnR between Lowry and Amir Johnson. Having Nick Young be part of this PnR defensively would constitute a win for an offence. 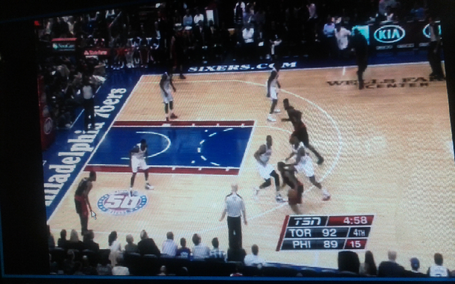 What transpired though was the equivalent of a car crash: 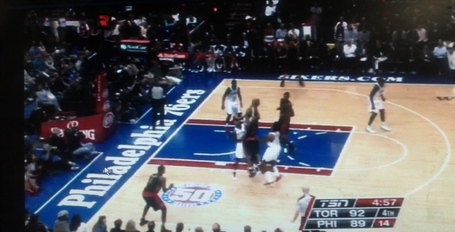 To be fair, having Dominic McGuire stand in the corner can make things like this happen but this wasn't a one off incident for Lowry. Here's a Left/Right PnR (I'm calling it this in part because I actually don't know what the name of this specific PnR is) with Amir and Ed Davis as the screeners.

Lowry eventually uses Amir as a screener and Parker fights over the screen, resulting in Lowry taking a Brandon Jennings like contorted running blah! 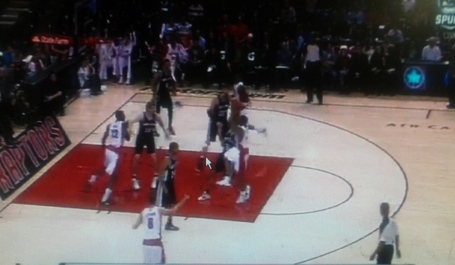 Plays like this were part of a troubling trend for Lowry, who during a 12-game stretch post return from injury proceeded to shoot 54 for 148. He also only produced a points-per-possession (PPP) of >1 four times. When defences gave Lowry space to launch off-the-dribble 3's, Lowry was more than accommodating in shooting them.

It's unsurprising that the Raps were awful during that span of games, going 1-11.

That stretch in general symbolized an odd two-month period for Lowry. He was unassisted on 63.5% and 67.7% of his shots in November and December respectively, hardly "offence-assisting" numbers, and he took more shots per game in those months, months in which Toronto went 4-13.

Blaming the November/December play of the Dinos on Lowry though isn't fair. The Raps were dysfunctional on and off the court, their most-used lineup of Andrea Bargnani/Jonas Valanciunas/McGuire/Lowry/DeMar DeRozan producing a net rating of -11.8. That's probably not a line-up you want to see anywhere outside of a YMCA team. Two man combinations involving Lowry defensively at that point were terrible (even the fabled Amir/Lowry combination, which did however improve as the season progressed).

With Lowry leading the second unit, January was a slightly better month for the club. Toronto posted a 5 and 9 record, and some of the club's losses were to elite clubs like Brooklyn, Miami and Oklahoma City. The team started to find its groove with Jose as the starter and Lowry bringing up the rear, playing .500ish ball for a brief period of time until Calderon was ultimately dealt.

A noticeable difference in Lowry after the Rudy Gay trade was the distribution of his shots. Perhaps due to Rudy Gay's high-usage nature this was the case, but there were indeed lesswild forays to the rim, slightly less 3's coming via off the dribble in pick-and-rolls, and more spot-ups. One thing the team did more of as well was use a big man with Lowry in pick-and-rolls, with the big man slipping, giving Lowry a target on the move. 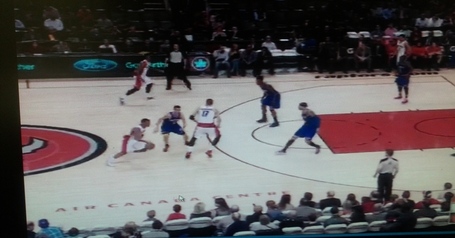 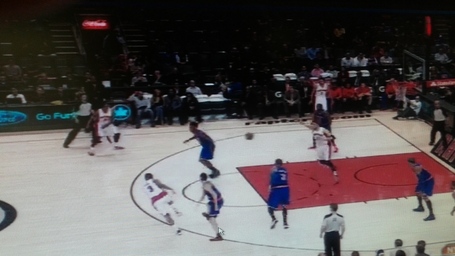 Lowry also did a passable Jose impression in the way he waited for his big man to get to the rim. One of the noticeable differences between him and Calderon was that Calderon would usually weave and bob, looking for the best option in pick-and-roll situations. Lowry mostly goes from Point A to Point B, making a two-man game a bit more of a challenge. This isn't a knock on Lowry, as he's a much more dynamic player off the dribble, and has been one of the more efficient PnR ball handlers in the league the last couple of years courtesy of Synergy Sports. It's just not always ideal so having the Raptor' big slipping the pick reduces Lowry's chances of turning things into carnage.

One exciting thing going into the season is the potential of the Amir Johnson/Kyle Lowry PnR. Amir ranked 27th in the NBA last season in rolling to the rim via Synergy Sports, and Lowry was doing an increasing good job of finding him as the season progressed. 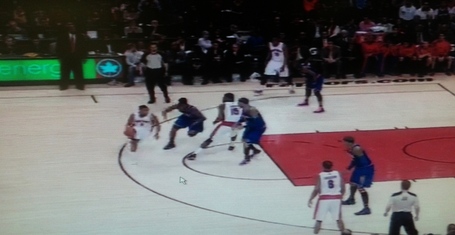 A small-ball line-up with a floor-spacer like Steve Novak or potentially Rudy Gay (with corrected vision of course) might even give more space to such a combination, or maybe the team has Rudy Gay as the guy slipping the screen, something he proved surprisingly good at last year. 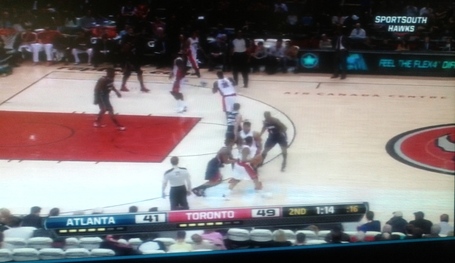 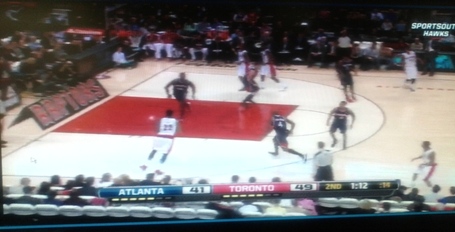 We've been talking a lot of Lowry's enigmatic season offensively because he was much more frustrating on that side of the ball. He was a tad more consistent defensively, (gambles for steals aside) with him and Amir Johnson doing a nice job shutting down high pick-and-rolls from opponents. The duo ranked 53rd defensively in two-man combinations from Feb 1st until the end of the Regular Season. The ValanciunasV/Lowry combination was also solid as well ranking 69th. Unlike the Amir/Lowry combo, which guarded the majority of PnR's via moderately aggressive traps thanks to Johnson's mobility; the JV/Lowry combo was a bit more traditional in that center (JV) sagged to the top of the key.

One thing Lowry must do if he wants to return to his 2011/12 defensive peak is quit the ball watching. And when I mean quit, I mean don't do this 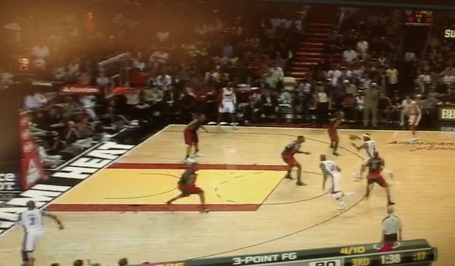 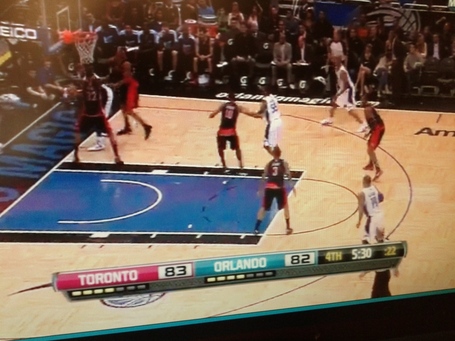 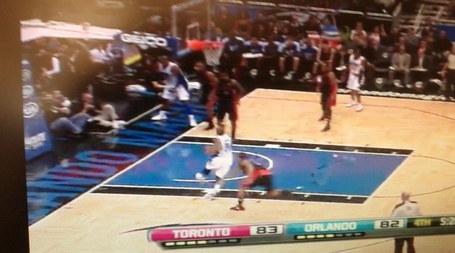 Lowry must be active at all times, but play within Dwane Casey's "stay at home" defensive schemes. Far too often last year Lowry's gambling in passing lanes resulted in open looks for opposing teams.

To put it mildly, this is a big season for Lowry. His reputation around the league isn't exactly stellar, and the fans in Toronto will be expecting a lot more than last season. With this being a contract year, we should expect to see a top-notch campaign from the former Villanova product, especially as he's the unquestioned starting PG going into the season.

If this occurs, than maybe it will reaffirm the Raps' brass' thought process when they acquired him (granted a lot of said brass is no longer with the club) and perhaps will lead to a long-term contract somewhere in the range of Ty Lawson.

Less ball-watching, corralling his reckless abandon a bit at both ends, and , KLOE will be one wealthy man.