A Closer Look at Austin Daye, the Newest Toronto Raptor

While the signing hasn't been made official yet by the team, the HQ's Peter Chalach takes a look at what Austin Daye could bring to the Toronto Raptors.

Share All sharing options for: A Closer Look at Austin Daye, the Newest Toronto Raptor

A 6'11, 200 lbs forward out of Gonzaga, now 25 years of age and entering his fifth year in the league, Austin Daye is the newest addition to the Toronto Raptors. His deal is very straightforward: a two-year, $2 million deal, earning approximately $1 million each season, although the second-year will be without guarantee.

Daye spent four years as a member of the Detroit Pistons before being included in a three-way trade last season that sent him and to the Memphis Grizzlies and brought star forward Rudy Gay to Toronto.

We cannot help but ask ourselves, why would GM Masai Ujiri sign up another wing player when the team's already stacked with similar assets? At $2 million a year, it doesn't kill us. Let's sit back and watch the Masai magic at work for an extended period of time before judging his decisions, shall we?

Let's take a look at Daye's tendencies, his strengths and weaknesses, as well as how he could help the Raptors.

For starters, Daye has always been a backup and will have no need of an adjustment period. He has career averages of 5.6 points-per-game as well as 2.8 rebounds. His three-point percentage is quite good for a big guy, shooting 35.6 percent from long-range for his career, including 52.5 percent with Detroit last season. His field-goal percentage however is quite atrocious at 41 percent for his career, missing quite a few good looks, especially at the rim. 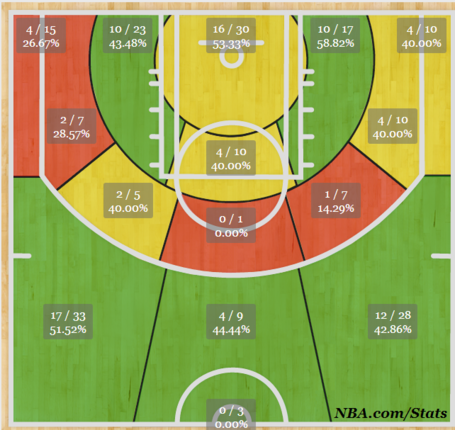 Each season, his offense at the rim has decreased, his three-point shooting numbers increasing instead (except for the 2011-12 lockout year): 6.39 percent of his offense in his rookie season, 7.26 percent as a sophomore, 5.46 percent in his third year and 9.14 percent last year. It would make sense for one not as familiar with Daye to think that his three-point numbers may have increased so much due to the fact that his role as a Grizzly could've been to simply spot up and shoot.

However, that's not the case. Yes, Daye attempted more spot-up three-point shots with Memphis, but his rate of success was nowhere near that with Detroit last season. He went 15-for-28 from spotting up from long-range with the Pistons versus 18-for-42 spotting up from distance with the Grizzlies.

Two reasons for this: firstly, a need for Daye to adjust to the system and know when and where to catch the ball, allowing him to catch-and-shoot in rhythm and comfort. Secondly, Daye started out the season blistering hot from deep, shooting 68 percent from deep in 12 games throughout November and December, and saw his success rate drop drastically from there: 42.6 percent in January and February, and 28.6 percent in March and April.

With his height, one would think he'd be comfortable switching between both forward spots. Unfortunately, this is not the case. At a mere 200 lbs, he gets tossed around very easily by other big men inside, and is more efficient therefore as a perimeter option. Evidence of this? Look no further than Daye's Player Efficiency Rating (PER) by position. Daye sports a PER of 15.4 at the small-forward position per 48 minutes of play, acceptable considering the league average of 15.00, however a horrendous 3.9 PER at the power-forward position per 48 minutes.

But enough on the numbers. How can he help the Raptors?

For starters he can back up Landry Fields, a guy who has disappointed so far in his tenure in Toronto. Granted, Fields was hurt and needed to recover, but one could see Daye stealing some of his minutes if Fields continues to struggle shooting the ball from long-range.

We're not sure how Dwane Casey is going to manage his roster and the minutes he gives his wing players but this signing gives him additional flexibility and a player who can (although as noted, preferably won't) play the 4 spot in a pinch.

One thing's for sure: this 25-year old Californian has got a lot to prove and will have to work hard to earn some minutes with a team overflowing with wing options.