While neither D.J. Augustin nor Tyler Hansbrough represent significant upgrades for the Toronto Raptors, they don't hurt the team either. Adam Francis explains why the signings therefore are ideal for Masai Ujiri and the Raps.

In his off-season outline for the Indiana Pacers, SI.com's Rob Mahoney opened with this salvo:

So it's likely not a huge comfort for Raptors' fans to know that two key pieces of said bench, Tyler Hansbrough and now, DJ Augustin, comprise a big part of Toronto's bench going into the 2013-14 season.

Neither player looks like a stellar option off the pine, and Augustin in particular is coming off a horrid season where he posted career lows in points, assists and rebounds per game. He sported a PER of 11, also a career low, and as Tim Chisholm noted in his post earlier today, doesn't represent an upgrade over John Lucas III, and was a net negative 6 for the Pacers when he was on the court.

In fact he was a net negative even more than that because the -6 was only on the offensive side of things!

The Pacers scored six more points per 100 possessions with Augustin on the bench, and were almost three points stingier defensively when he was sitting out the action.

As I noted the other day, Hansbrough historically has hardly provided a huge boost either on the court versus off, so at face value, it may be a bit hard to follow Ujri's logic here with these signings.

However I'd argue that these in fact are "best-case" signings for a Raptors team that has yet to determine its approach to rebuilding.

Call it "killing two birds with one stone," or as Ricky from The Trailer Park Boys might say, "get two birds stoned at once."

Ujiri ensures the team can be competitive by adding these veterans instead of unproven rookies or D-Leaguers, but also not so competitive that he can't suddenly decide to go all-in on the Andrew Wiggins-fest. As noted, neither player should provide huge boosts in productivity, and neither is locked into expensive, long-term deals so they should be relatively easy to move in trades if need be.

And yet both players provide skills the Raptors were in short supply of, from Hansbrough's rebounding and overall grit, to Augustin's long-range shooting. Augustin hit on 35 per cent of his long-range attempts last year, but as you can see from the shot-chart below, if the Raptors can park him in the corner, especially the left one, and let him bomb away, he could be a very useful piece. 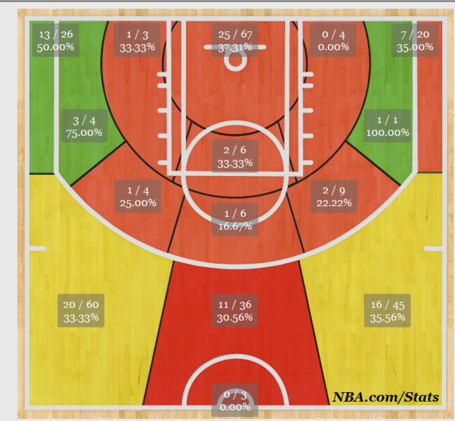 In this way, it's an ideal situation for Ujiri.

Until he sees this team in action, he likely won't truly be able to decide just how good he thinks the present roster can be, and how best to mould it into the contending team he eventually envisions. So these small signings don't do much to tip the apple cart by fostering potential positional battles, and yet help act as solid stop-gap solutions while he figures things out.

It's a win-win in my books, and again, a completely opposite approach from one we've been accustomed to over the past few seasons.