In the latest entry of our continuing offseason player evaluations, the HQ's Braedon Clark looks at Alan Anderson and his George Costanza-ish "chucking" ways.

"The Boyfriend", one of the most famous episodes in Seinfeld history, opens with Jerry, Kramer and George getting changed in the locker room after a game of pickup basketball:

After some deliberation, Jerry and Kramer convince George that he is a dreaded "chucker", one of those annoying players at your pickup game who only shoots when he has it.

"All these years I've been chucking you never told me?" George asks Jerry.

"Well, it's not an easy thing to bring up," Jerry replies.

Sometime during this past Raptors' season, Amir Johnson, or Kyle Lowry, or anybody should have had that same conversation with Alan Anderson. In every way, Alan Anderson is the antithesis of George Costanza, except for this one inescapable fact - they are both chuckers.

I will reveal my bias from the top on this one: Anderson was my least favourite Raptor this season. He had stretches of brilliance, including a 35-point explosion against the Knicks on March 22; unfortunately, those rare great shooting nights only seemed to compel him to shoot more. He averaged more shots per game than Kyle Lowry, Amir Johnson and Jonas Valanciunas, all of whom are either more efficient or more creative with the ball in their hands. Redistributing some of Anderson's shots to other players would have helped the team on offence. Overall, he shot 38% from the field and an uninspiring 33% from three, where nearly half of his shots came from.

Despite these very real drawbacks, Anderson continued to play heavy minutes for Dwane Casey. In Casey's defence, there weren't any great options to go to, though I would have liked to see Terrence Ross take some of Anderson's minutes. Even during stretches of poor play, Anderson would continue to get time; I began to wonder if he had some incriminating evidence on Casey stashed in his locker.

As he so often did this season, Grantland's Zach Lowe summed up the Anderson experience best in a piece identifying "new age Shane Battiers", wing players who combine great 3-point shooting and defence: "He [Anderson] spent much of the past season gunning for points in Toronto, and would have to find more balance and stability on both ends to sniff membership." 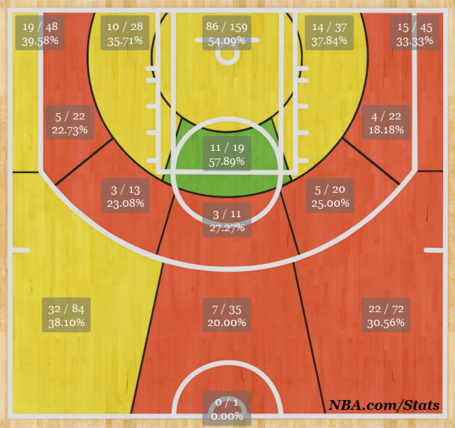 As we can see from his shot chart, Anderson was an average to below average shooter from every area of the floor except for the free throw line, where he only took 19 all season. What's most disturbing is the abundance of red around the three point line. He was an average shooter from the left wing and corner, but took nearly as many shots from the right side, where he was below average. The lesson? Alan Anderson didn't know where his shots came from. For an alleged shooter, he didn't shoot very well.

The other components of his game didn't offer much hope, either. The team performed better defensively with him on the bench. His rebounding was average and he posted a PER of only 12.6. On a team sorely lacking in playmakers, Anderson wasn't one. His assist ratio (% of possessions ending in an assist) of 11.9 was one of the lowest numbers for a shooting guard, though he did rate ahead of teammates DeMar DeRozan and Terrence Ross. (Rudy Gay also ranked in the bottom third among small forwards on this metric. Memo to Masai: wing players who can pass are needed.)

There's almost no chance that Anderson will be back with the Raptors next season. He is a free agent and, coming off a season in which he made the minimum, he's sure to get a healthy raise. His departure should open up minutes for players like Terrence Ross and (gulp) Landry Fields. I'll miss his random scoring explosions but, unfortunately, they were too few and too far between. I look forward to the offseason next year, when some writer on another team's blog complains about Alan Anderson, professional chucker.