(Warning: The following comparison in no way represents the fine folks at Raptors HQ and only represents my lack of pop culture comparisons to Terrence Ross. I might as well be honest; this will be the worst comparison between a Toronto Raptor and pop culture you'll see on this site. My advice, just skip the 150-500 words I'll spend talking about Rush Hour 3. You'll thank me later.)

I remember watching Rush Hour 3 two years after it was released. I had high hopes cause well, just watch that scene I talked about earlier and try not to laugh. I left feeling disappointed by the film if only cause it felt as if this was a movie that was just rushed upon, and Jackie and Chris just went in and collected a check, something similar to what Rasheed did while he was a Celtic in 2010. It was redundant, tedious, and just weird. It had his moments, such as this scene, but it overall was a disappointment:

So what does this have to do with Terrence Ross? Similar to Rush Hour 3, the general rhetoric around Terrence Ross's rookie year was of frustration (obviously not to the tune of Rush Hour, but you get the point). The 8th overall pick in the 2012 NBA Draft at times looked like a (CLICHÉ ALERT!) rookie who was overwhelmed at times during the season. He was part of the Anderson/Ross conundrum; his minutes were yanked around during the yr, and a guy who was advertised as a 3 Pt shooting/Defense guy didn't exactly live to those expectations for some Raptor fans.

The Raptors last year finished 25th in the NBA in 3FG% despite taking the 12 most 3FGA per game. Before the Rudy Gay acquisition, the Raps were 21st in 3FG% and 8th in 3 FGA per game. The departure of Jose Calderon played a part in the team's slight decline in 3 PT efficiency. Kyle Lowry shooting 28.7% from 3 in March and April also played a part while Ross Pre Rudy Gay shot 3.3 3FGA per game at a 33.3% clip while Post Rudy deal, Ross shot only 1.8 3FGA at a 32.7% clip.

Despite their 3 PT shooting woes and their penchant for mid-range jumper (They were 7th in mid-range field goal attempts per game); the Raptors were a moderately efficient team, due in large part to their success in Isolation situations. The Raptors According to Synergy sports ranked 8th in the League in PPP Isolation situations with Rudy Gay and DeMar DeRozan spearheading their Iso heavy attack with Isolation possessions making up 19.9% and 15.6% of their overall possessions respectively. The duo were 29th and 44th in their rankings, which is amazing considering they only combined for 30 3PT attempts in Iso situations (they however shot 40% combined on 3's). Isolations overall made up 10.6% of the Raptors' possessions during the season, ranking third in possessions used, and it'd be curious to see if this type of Iso heavy attack can last over multiple seasons and whether the Raps can diversify their offence to combat for some potential drop-offs in their isolations on offence 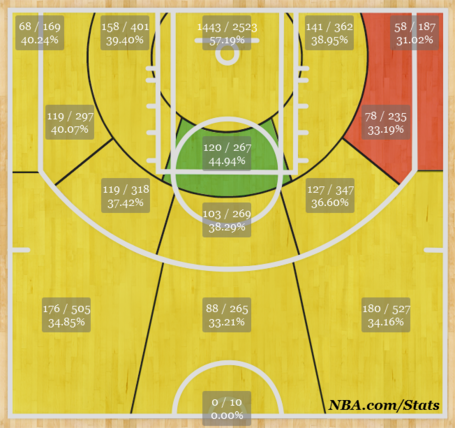 Terrence Ross had a breakout yr in Washington in 2011-2012, shooting 45.7% from the field and 37.1% from 3. He became a much more central part of the Huskies attack with his minutes spiking from 17.4 MPG to 31.1 MPG. According to Draft Express, Terrence produced a 22.4 PER, had a Pts/Pos of 1.18 and had a TS% of 56%. Ross had 13.9 possessions per game, more than doubling his possessions from 2011 (6.7 to be exact). He constituted nearly 20% of the teams possessions overall, an increase from the 9.2%. A lot like his rookie season in Toronto, Ross's main attributes other than his athleticism was the way his game didn't revolve around creating off the dribble. Here's a scouting report on Ross's ability without the ball from Joe Treutlein of Draft Express while in Washington:

Joe continues on with how Ross's athleticism enables his off the ball game to counteract his limited ball-handling:

Here's one more from Joe concerning another attribute of Ross's skillset, his defense:

Defensively in isolation situations, Ross held opponents to a PPP of 0.81 according to Synergy, a mark that's comparable to wing players like Fields (0.85), DeMar (0.8), Gay (0.75) and Anderson (0.78). Ross limited his opponents to 33.3% from the field, a percentage that's only bested by Gay who limited opponents to 30.8% shooting from the field. To some extent, what screwed his PPP was his penchant for shooting fouls in isolations. He committed 12% of his shooting fouls in isolations situations. His bread and butter this yr defensively was containing his opponents in PnR situations and off screens. When guarding a PnR handler, Ross limited his opponents to a PPP of 0.67, an outstanding mark that ranks 26th overall. In Off Screen circumstances, his PPP was 0.69, ranking 20th. He was much sounder defensively (and the team as a byproduct) in these situations just committing 7.6% and 2% Shooting fouls in these situations. Now, Ross only played 17.0 MPG and only registered 366 possessions according to Synergy, plus at times, Ross did look lost under a team that had their overall defensive efficiency slip from 2011-2012, But Ross skill set defensively is something Raps fans should look forward to in the coming years. 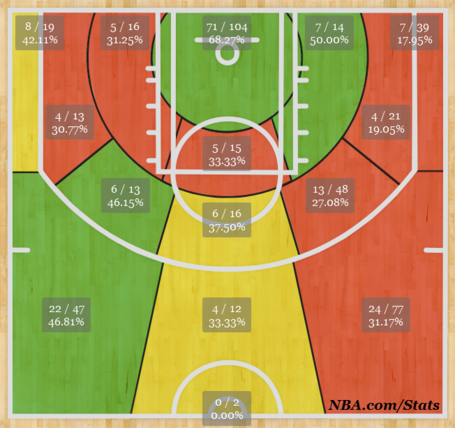 Off screen situations and to a larger extent, Transition, was where Terrence exhibited proficiency in his offensive game. He registered a PPP of 0.85, giving him a ranking of 89 according to Synergy. He shot 38.4% from the field, 40% on 3's in this situation. In transition, Ross was ridiculous, registering a PPP in 1.35, shooting 68.2% from the field and 37.5% from 3. Here's just Ross being an Athlete:

Similar to his breakout yr in Washington, you won't be mistaking Terrence Ross for a guy who can create his shot off the dribble. He shot only 31.6% from the field in Isolation attempts. What you notice with Ross when creating off the dribble was his tendency for pull up jumpers, a byproduct of some sorts from his questionable ball handling. He registered a ranking of 170 with a PPP of 0.68. His passing also needs work, which will hopefully come with more experiences in dealing with today's complex NBA Defenses, and a marketable improvement in his ball-handling. Ross only registered an AST% of 6.9% while having a USG% of 19.6% and a TOV% of 9.2%, numbers that aren't exactly good for the heart. It isn't necessarily that Ross is a ball hog or has tunnel vision. Ross can and usually does make the correct pass out in situations that call for it. Here's Ross coming off of a double screen on the left side of the court.

In that clip (A bad quality clip, but a clip nonetheless), you see Ross run off LeBron and when seeing a double team of LeBron and Haslem, He makes the correct play in getting Amir an open jumper off of the play.

Terrence Ross had an average rookie season, and to some, a below average rookie yr. He's limited in some key parts in his offensive game (Off the ball creativity, Ball handling), did not exactly fulfill the desires of Raps fans with his shooting, and was part of a team that has questions to answer before tip off in October. It isn't conceivable to see Ross play a much bigger role in the Raps future, namely with his defensive capabilities and his success without the ball offensively. And with Dwayne Casey wanting a change in the teams identity, Ross could play a fairly large part in the Raps defensive identity, one that fans hope will mark a return to the post season for the first time since 2008.