I still have the receipt.

It's six years old now. The words have faded into the discoloured paper, but squint hard enough and you can make out the details -- $743.24 spent on an Xbox 360 and one game, Gears of War. My 19-year-old self cared not for the price, expensive as it was.

Six years later, and after countless hours of use, my Xbox is still going strong. I don't use it nearly as much as I used to, but, despite the seemingly high price I paid for it, it's been worth every penny.

When Bryan Colangelo signed Johnson to a 5-year, $30 million contract in the summer of 2010, it was widely seen as an expensive overreach on an unproven player.

In a lot of ways, it was hard to argue with those questioning the deal. Johnson had just come off a season in which he averaged 6 points and 5 rebounds per game. He'd shown an uncanny ability to pick up the dreaded two early fouls, limiting his chances to show an admittedly intriguing skillset. He always posted impressive advanced stats, but just couldn't stay on the floor.

Now, three seasons into that deal, Johnson has become one of the Raptors' best players. In fact, you can make a great case he was the team's MVP in 2012-13, though that probably says as much about Johnson's improvement as it does Toronto's general lack of everything. If Amir Johnson is your team MVP, you're probably not going anywhere.

But I digress. This is supposed to be about how good Amir Johnson was this year, and guess what? He was!

He averaged career highs in points, rebounds, and minutes, flashed an improved jump shot and featured in many of Toronto's best defensive lineups. He played through a litany of injuries and, as always, never complained about another lost season.

For bonus points, he was also involved in the season's most bizarre incident, when he threw his mouth guard at referee David Jones in Portland after the two wrestled for the ball during a set of free throws. He even managed to hit Jones in the back, an especially impressive accomplishment considering a) he was being held back by several of his teammates and b) Jones was at least 15 feet away at the time.:

His shot chart shows Johnson's greatest offensive strength - he is an excellent finisher around the rim. 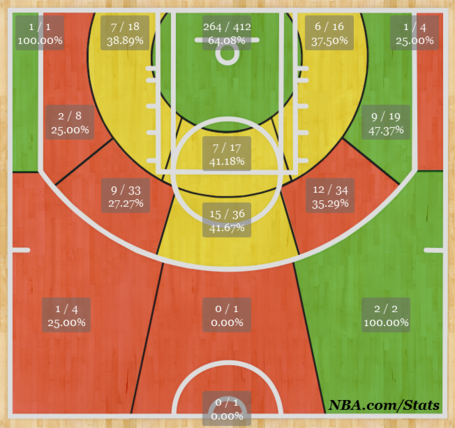 He obviously knows it too, taking more than two-thirds of his shots from within eight feet. With good hands, a soft touch and a tendency to keep the ball high, he's a monster around the basket. This sequence against Indiana is a perfect example of what makes Johnson so effective:

Overall, there is very little to complain about Johnson's 2012-13 campaign. Looking forward, he projects as the starting power forward next season, lining up alongside Jonas Valanciunas.

There are some potential issues with that pairing. Johnson is an average but infrequent midrange jump shooter, which can create spacing issues with Valanciunas. Neither are good passers, offering little hope that they could develop a Tim Duncan-Tiago Splitter passing attack to overcome a lack of frontcourt shooting.

Despite this, lineups featuring the two scored 105 points per 100 possessions, more than two points better than the Raptors' overall mark. There was even better news on defence, where Toronto only allowed 96.5 points per 100 possessions with Johnson and Valanciunas on the court together, a rate that would have lead the league. These numbers come from a relatively small sample size (365 minutes), but they are encouraging nonetheless.

While it seems like he's been around forever, Johnson is still only 26, owing to his status as the last high school player ever drafted into the NBA (56th overall by Detroit in 2005). It might be unreasonable to expect another leap forward this season but, given his age and work ethic, there's little chance his play slips.

On a team full of bloated contracts, underachievers and question marks, Johnson stands out as close to a sure thing. He doesn't have the talent of Rudy Gay or Kyle Lowry, but he's probably a more valuable and reliable piece.

Depending on what Masai Ujiri does this summer, Johnson may be one of the few remaining links to the Colangelo era when training camp opens in October. An ideal scenario would see Johnson come off the bench behind Valanciunas and a stretch four. Alas, ideal scenarios are hard to come by with this team.

In the meantime, Johnson should continue to provide a mix of steady defence, efficient offence and the off chance that he'll assault a referee with a saliva-soaked piece of plastic. He's as steady as a six-year-old Xbox 360, and that's a compliment.

Thanks, Amir. We couldn't ask for more.