In his debut piece for the site, Mohamed Mohamed takes a look at some of the challenges facing General Managers when they evaluate young talent, and in particular, looks at one such problem player, the Raptors' DeMar DeRozan.

Young talent can tantalize a GM, especially talent that isn't All Star caliber talent. GM's in times like these ones have to make prognoses on how their game might shape up when signing them after their rookie contracts. Guys like Mike Conley, who's contract made Chris Wallace a laughing stock at the time (along with moves we won't mention here because it'll take a while), now make him look like a guy who guessed correctly on what he thought Mike Conley would become as a player, especially when the Grizzles made the Western Conference Finals, and Mike Conley blossomed with his expanded role Post Rudy Gay deal. If you don't believe me that it's hard to forecast young talent, just read this excerpt from CBS Sports from Nov of 2010 courtesy of Matt Moore when Mike Conley was signed to his 5 year $45 million deal:

This, this right here, is not just the worst move in the history of the Grizzlies, but it is the shining golden cap on the mountain of terrible moves made by NBA owners over the past 2 years. It is this, exact move, that nullifies any argument the owners can possibly make that they spend their money responsibly inside the current CBA. It is this contract that overshadows Joe Johnson's contract, Amir Johnson's contract, Darko Milicic's contract as the single worst contract handed out in 2010.

Now, the point of this isn't to ridicule Matt Moore (who by the way is a fantastic writer) and his thoughts at the time on Mike Conley, it's proof that forecasting young talent can be a bitch. Mike Conley has turned himself into one of the best two-way point guards in the NBA. He went toe to toe with the best point guard in Chris Paul and more than held his own during their recent series. He averaged a PER of 22.9, TS% of 55.1%, AST% of 38.84% and a TOV % of 9.59% according to RealGM's advanced stats database. His advanced metrics decreased as his USG% slightly went up during each series. Mike Conley isn't the best PG in the NBA, and hell, he might not be an All Star calibre player along the lines of guys like Jrue Holiday and Steph Curry, but he's grown to the point where he was an indispensable player on a team that post-Rudy Gay had the second best Defensive Rating in the NBA. Even within that little section of Matt Moore's column, he referenced Amir Johnson's contract that now looks like a solid transaction made by Bryan Colangelo -one of the rare solid transactions during his reign in GM. What, you thought this post would be entirely unbiased?- and Conley's deal appears to be in that same vein.

Take another example in Tyreke Evans, the 2010 Rookie of the year award winner, who is a restricted FA this off-season. Despite the dysfunction that's clouded the Sacramento Kings franchise, Tyreke whether it's in Sacramento or somewhere else will get himself paid, perhaps to the tune of a DeMar DeRozan like deal. He played the second most games in his four year career, had the best TS%, eFG%, PER, and lowest TOV% of his career. He's still got some ways to go though in terms of his shooting despite his career high in TS% and eFG %( that in of itself could be attributed to taking 2.5 less shots per game compared to last year). He took 101 shots from Above the Break, three up from 91 during the lockout year per NBA.com advanced stats tool. He went from a disastrous 19.8% on those shots to a more respectable 33.7% in that area. 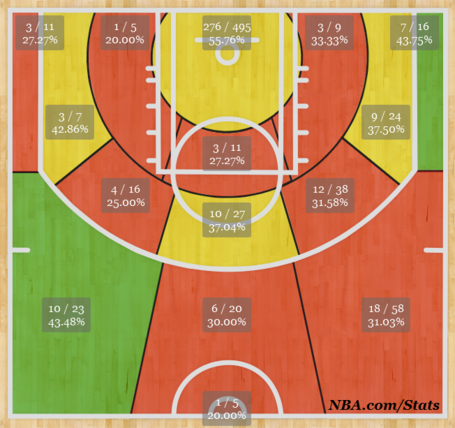 With the hiring of Mike Malone as head coach, it'll be interesting to see what happens to Tyreke this off-season, and what'll happen to the Kings nucleus in general. With the 895 rumors surrounding DeMarcus Cousins and the mismatch of pieces that has dotted the Kings' roster, it isn't a certainty that Tyreke will be in Sacto come next season. The Kings can qualify Tyreke at a cap number of $6.9 million or flat out let him walk into unrestricted free agency, and whoever gets him will get a guy who's an interesting piece to say the least.

It isn't just perimeter players that can screw GM's, another pet peeve for GM's is big men who display enough potential to make a GM take a chance on the possibility of having an starting/All-Star big man for years to come. One example of that is Eddy Curry. Yes, the same Eddy Curry who came into training camps out of shape, refusing to do DNA tests based on privacy grounds, and pretty much became the symbol of the Isiah Thomas era in New York. He was, well, a disaster defensively, and uhh, did I mention he came out of camp out of shape? Oh, and don't forget he last played in the CBA:

Want more examples? Jerome James, another guy who famously parlayed a contract year with his playoff performance in the 2005 NBA playoffs got $30 million for his efforts. Bryan Reeves (Vancouver Grizzlies fans stand up!) signed a 6 yr $64 Million dollar deal in 1997 and he was forced out of the league in 2001 because of a degenerative back condition. Raef Lafrentz got $70 million for god's sake. What I'm pretty much saying here is being a GM can be a pain in the ass

And now we hit DeMar DeRozan, a guy who provided enough production over his previous 3 years to earn himself a four year $38 million dollar deal that's to some Raptors fans is the epitome of the Bryan Colangelo era in Toronto. He's shown incremental improvements in his game that has provided some fans with hope that he'll be worth his new deal over time. He raised his PER from a paltry 12.8 to a near average 14.7. He produced his best WS in his career even though according to Basketball Reference, his similarity score is similar to guys like Raymond Felton and Rodney Stuckey. He's a player who's known for being an inefficient player during his career. He took 649 mid-range shots this yr per NBA.com's advanced stats tool, to the tune of 7.9 shots per game. Out of the 649 shots, 51.3% of them were unassisted. He shot 32.3% on jump shots this season, a percentage that bests the likes of Kobe Bryant, Dwyane Wade, and James Harden. There's obviously somewhat of a misnomer here considering that nearly 70% of DeMar's jumpers were assisted compared to guys like Kobe/Wade/Harden who had their jumpers unassisted on at least 50% of their jumpers, with Wade having his jumper unassisted 67.7% of the time. 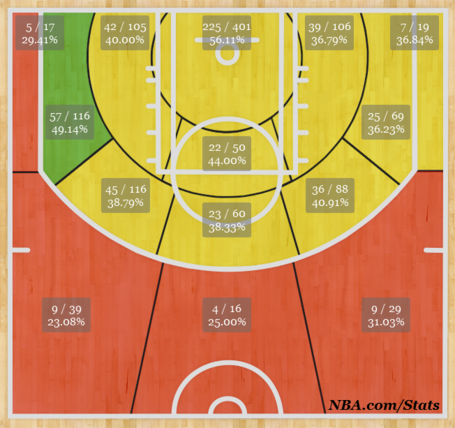 He's still a work in progress in terms of his passing and his ball-handling, something that should be a point of emphasis this off-season. He registered an AST% of 12.0% this yr, which is disappointing from the Raptors' point of view considering he was second in USG%. His work on the defensive side of the court needs...well...work. He produced a NetRtg of -2.4 this yr. His own individual DefRtg on the court was 104.3. He's below average in terms of his lateral quickness which allows him to get burned defensively. With a core of himself/Lowry/Gay/Jonas/Amir, they however produced a DefRtg of 92.5, an exceptional number considering DeMar and Rudy Gay's flaws defensively.

Digging deeper, the two man unit of Amir/Jonas together posted a DefRtg of 96.5, the best rating for a two man combination logging at least 250 minutes together. At a combined cap hit of just over $10 million next season and $10.68 million in 2014/2015 (providing the Raps pick up their team options for that year, which is pretty much a formality), the Raps have stumbled onto a front-line that's one of the most cost efficient ones in the NBA. That's a great thing for the Raps considering that their cap flexibility is nearly non-existent, even with the impending Andrea Bargnani trade/amnesty. Masai Ujiri is a home run hire for the Raps, a GM who did wonders with the Nuggets post-Melo era, and according to Tim Leiweke, they're prepared to strip down the core if it needs to come to that.

All of what's been written is to say this: Being a GM isn't as easy as you think it is. We laughed at the Roy Hibbert extension when it was signed; we don't anymore. We used to laugh at Chris Wallace; we don't anymore (at least in the last few years). DeMar is only 23 and as Roy Hibbert, Jrue Holiday and Mike Conley proved (and sadly, as Jerome James, Raef Lafrentz, and Ben Gordon proved as well) , it takes a few years before you can make some sort of a definitive judgment of a player. Remember that the next time you favorite team makes a decision you vehemently disagree with.