With the dust having temporarily settled on the Toronto Raptors front office situation, the HQ launches into its string of off-season player evaluations.

In order to avoid the same-old, same-old on these, each will have its own unique flavour as we profile the players from the 2012-13 squad that won 34 games.

We kick things off with Kinnon Yee's look at DeMar DeRozan, who, despite a premium price, hasn't provided premium flavour...

In my spare time, I like to cook quite a bit. I've worked in a restaurant, and I'm a bit of a gourmand and foodie.

When my wife and myself headed to San Francisco a couple years ago, we sampled the best.

Michelin-star restaurants. People on the cutting edge of gastronomy and the art of making food taste good.

Toronto's been moving in that direction. We've assimilated the coffee culture, and even started to take on trends. Things like Ramen Bars, Burrito shops, and farm-to-table have taken hold here.

A few years ago, burgers were all the rage.

You have places like Hero Burger which are common franchised "higher classed" burgers, then you have specialty places like The Burger's Priest which have secret menus and burgers that cost north of $15. On top of that, you have top level restaurants that have wagyu beef burgers with shaved truffle and specialty cheeses melted on top.

Of course there's also the good ol' stand-byes like McDonald's.

McDonald's knows what you say about their Big Macs, Filet-o-Fishes, and Quarter Pounders. They hear you snicker. They know that you're comparing their burgers to everyone else's.

That's why McDonalds has their own line of "premium burgers". Angus burgers that can compete with other gourmet burgers.

Heck they even have gourmet prices.

DeMar DeRozan, then, is the McAngus Burger of the Toronto Raptors

Bryan Colangelo might have told you that DeMar DeRozan isn't overpriced.

He'll tell you he's priced on potential. He's priced on what the market is dictating for a starting shooting guard.

Instead, DeRozan is once again low on substance, and has fundamental flaws in his game. Yes, he was better when he had a little more room when Rudy Gay was on the floor, but at what cost? This is a player who next year will cost gourmet-SG prices.

And yet he will earn almost three times the money next year.

So regardless of how you cut it, and what metrics you use, we're talking about at best an average shooting guard, getting paid a lot more like a stud.

Now you can't blame DeRozan for his contract. He is what he is. But marketing him as otherwise, that falls on someone else's head. (Or did thankfully.)

If that doesn't define paying a premium price for a marginally better product, I don't know what does.

And if management is buying that he's a premium player, I hate to see their faces when the taste hits their mouth.

So, I therefore present to you, your shooting guard of the future. 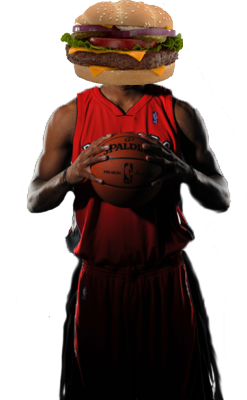