Quincy Acy barely played in February and went down to the D-League for most of March. Back on the floor as a Raptor on Monday, he was ready...

TORONTO -- Quincy Acy left an impression on the Chicago Bulls 11 weeks ago. In a tough 108-106 loss at the Air Canada Centre on Jan. 16, the Toronto Raptors forward made all of his field goal attempts: three dunks and a mid-range jumper. Acy, the 37th pick in the 2012 draft, also finished with six rebounds, a block and a steal, making the most of his 15 minutes.

In the visitors locker room after the game, Bulls forward Taj Gibson talked with frontcourt partner Joakim Noah about Acy's aggressiveness. During the game with play paused for free throws, Gibson showed the rookie some love.

"Way to earn your minutes," Gibson said to Acy. "Just keep playing hard, you're going to stay on the court and find your way into the rotation."

"It means a lot because I watched him for these past couple of years and I like how he plays," said Acy. "He plays hard, he's improved a lot just off playing hard and working hard. To hear that from a guy who's been through some of the things, just playing hard to get where he is, it means a lot."

When Gibson was a rookie in Chicago three years ago, he was in the starting five before the season's second week. While the story has not been the same for Acy, you can see some similarities in style.

"Taj was the same way - great worker, high motor," said Raptors center Aaron Gray, a Bull when Gibson began his career. "I don't think anyone in the league would not appreciate the effort and intensity that Quincy gives. To hear that Taj kind of gravitated toward him doesn't surprise me at all."

Since that game, though, Acy's minutes dried up. Jonas Valanciunas and Andrea Bargnani returned a couple of weeks later and the newly-acquired Rudy Gay played some power forward. Acy played just two minutes in the month of February, then five on the first day of March before spending three weeks in the D-League.

Monday finally marked his return to an NBA court. In the second quarter against the Detroit Pistons, Acy skied for an offensive rebound, then rose up again and screamed as he attacked the rim with a vicious one-handed dunk. He finished with four points, three rebounds, one assist and one steal in seven minutes. More important than the role he played was the fact he was ready.

"He's a hard worker and he's a great teammate," Gray said. "People like that, you want to see succeed. You want to see them put in the best position possible when they do get their opportunity and that's kind of been my thing with him. Especially as rookies, it's hard for first round high draft picks to break into rotations. Now you're coming in as a second-rounder, you need to develop a little more, but just stay patient and keep doing the things you're doing. He's done a great job."

Gray was a second-round pick himself and knows all about staying patient and persistent. On separate occasions this season he's received DNP-CD's in seven straight games and started six straight. From night to night, you don't know whether or not you'll see him on the floor. Before every game, though, you can find him attentively watching game tape in the locker room. Not only has Gray's approach had an impact on Acy, he has taken him under his wing.

"I can't even start on A.G., man," Acy said. "That's my vet. I love A.G. like a brother because he's a humble guy. No matter if he plays 20 minutes of zero minutes, he's gonna be the same. He comes in, he'll work out with me in the morning. He don't have to be here early but he comes early. It just says a lot about him, his humility and his, I don't know, he's a good dude, man.

"You ain't gonna find too many dudes like Aaron Gray," Acy continued. "He's a great dude and it's just like little things - he's always making sure we go hard in the weight room. When we're shooting, he makes it competitive. He's like, ‘Keep working, young fella, keep working.' At halftime, at a certain time on the clock: ‘Come on, Q. Let's go out.' He's like my big brother. I'd do anything for Aaron, man, because he's done so much for me and I can't even stress to you how important he is to my development and how good he's been to me mentally." 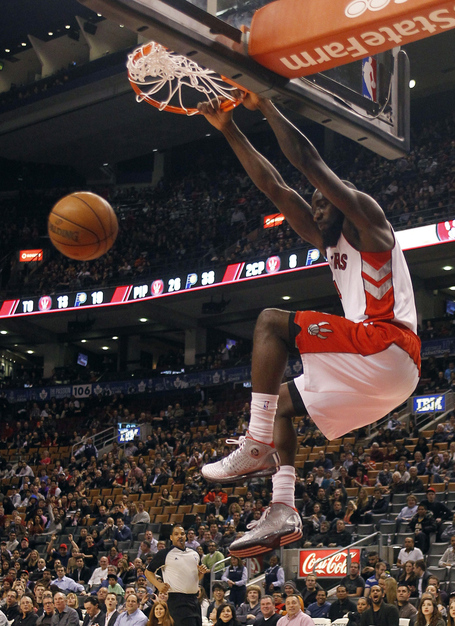 At the same time as Acy is earning encouragement, he is doling it out to his former Baylor teammates. Even though he, Quincy Miller and Perry Jones III are all rookies, Acy still feels like their vet. He says both Miller and Jones have "all the talent in the world" but understands that, on good teams, they'll have to wait to showcase it.

Jones has jumped from the Oklahoma City Thunder to the Tulsa 66ers and back all season long and Miller just played his first Denver Nuggets minutes in of 2013 on Saturday. Acy knows how difficult that is to deal with.

"I'm older than them so I just feel like I can give them a little more advice," said Acy. "And it's coming from somebody that's going through the same thing as them, not somebody that's playing 30 minutes or something like that. I think they can relate to that a bit more."

Acy's easy to relate to, easy to root for. That's always the case when your style of play is all heart, energy, extra effort. With eight games left and the playoffs out of the question, it's time for him to make some more impressions in Toronto.