Despite a strong start, the Raptors ran out of gas and were defeated by the undefeated Indiana Pacers 91-84.

Share All sharing options for: Raptors fall to undefeated Pacers 91-84

As the saying goes, it takes two to tango. Sadly for the Toronto Raptors on this night at Conseco Fieldhouse[1], they brought their clogging shoes instead as the Raptors fell to 2-4 on the Reg Season following a 91-84 defeat by the Indiana Pacers. Rudy Gay led all scorers with 30 points (we'll get to him later) as the Pacers got the victory behind kick-ass defense, a 3rd quarter explosion by budding superstar Paul George, and Roy Hibbert staking his claim as the best center in the NBA. As usual whenever yours truly does the recap, let's get to the Good, Bad, and Meh of tonight's tilt:

· We'll start with Rudy Gay. Rudy Gay as most of you know is a professional basketball player for the Toronto Raptors. He's also a man who likes to get his point across via shots. No, not gun shots, but jumpshots. Rudy Gay had 26 FGA in this encounter. That is a high number, but.... He was fricking awesome in the first half. 22 points on 13 shots, and this shot chart is just... GREAT! 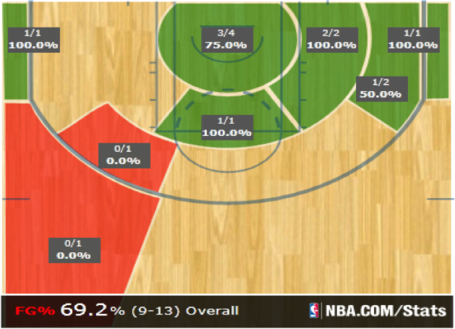 · Speaking of sights to behold, the Paul George/Rudy Gay bout on the Wings was awesome as well. I scored the bout as a win for Paul George via judge's decision. Paul George is a fantastic player who's defense I believe still doesn't get enough love from the MSM. He hounded Rudy Gay and to a lesser extent DeMar. His ball handling has improved substantially, he's become a more respected shot creator, he doesn't force the issue and the way he can get shots via cuts are orgasmic. Paul George came into this bout averaging a PER of 27.2 while having a 62.6 TS%. I'm calling for him to make All NBA 2nd Team and All First Defensive Team.

· The Indiana Pacers have the league's best defence at a startling 87.5 DefRtg, a mark that would stand as the best defensive unit since the inclusion of the 3 PT line in the 79-80 season. They are terminator like defensively with one play in particular that caught my eye:

We have Rudy Gay using a Lowry pick to get himself into the post. Standard stuff. Even though Kyle Lowry is much smaller than George, he is a good pick setter. Notice how quickly he gets to the post area and fronts Rudy Gay while Hibbert is shading that area as well:

This leads to a highly contested pull up jumper by Gay over George. The Pacers are ridiculous defensively and the Raps after the first quarter found out that fact the hard way

· This was not a good night for the "DeMar is becoming a better wing than Rudy Gay" camp or the "DeMar is finally becoming an above average SG". DeRozan had a 2-15 shooting night and there's a 85% possibility that he'll be having nightmares of Paul George and Lance Stephenson taking turns in turning every possession into a 10 on the difficulty scale. Fadeaways, contested mid range jumpers, double pump jumpers from the baseline. It was not a good day at the office for #10

· The Psycho T/Gray partnership isn't as much a partnership as it's two black holes combining to make this one destructive black hole that engulfs the entire universe, or how 3 girls at the bar equal  thisaccording to Family Guy

· I know he's only in his second yr, and I still believe that somewhere in Terrence Ross is a 3 and D guy that would be a godsend for the Raps so I'll say this: don't make me regret my believe in you Terrence. I'm a cold man when crossed the wrong way[2]

· DJ Augustin's descend from Competent NBA PG to a D-League player has been depressing over the last 3 yrs. Coming into this game, he had a PER of 0.2. Somewhere Kendrick Perkins is yelling "HA! SUCKS TO BE YOU!!!!"

· Amir Johnson was a -11 on the night. WEEEEEEE

· If you have read my recaps on this site last season, you know that I'm not a fan of Leo Rautins[3]. He seems like a nice person and all, but I fail to see the value in his after halftime interviews with the Raps Assistant coaches. It's not as if he's hitting them with tough questions or anything. Leo isn't alone in this as most if not all sideline interviews are a waste of time. I just want to live in a world where Sideline interviews that don't involve Greg Popovich are banished to the doldrums.

Anyhow, that's all I can muster for one night's work. Now if you'll excuse me, I'm going to rub my belly while singing Hillbily Hare.

[1] I know it's Bankers Fieldhouse. Don't judge me!