Can the Raptors bounce back on the second night of a back-to-back? More importantly, will Rudy Gay ever make a shot again?

Share All sharing options for: Raptors vs. Bobcats: Gameday Preview

The Raptors are in North Carolina tonight for a meeting with the 2-2 Bobcats. Both teams will be on the second night of a back-to-back: last night the Raptors fell apart in the fourth quarter against Miami, while Charlotte took care of the Knicks in New York.

Here are three keys to keep an eye on as the Raptors look to move back over .500:

Will Rudy Gay break out of his shooting slump?

Maybe that corrective eye surgery wasn't so corrective after all. It's only been four games, but Gay's shooting has been horrible from just about everywhere. Don't believe me? Here's the gory shot chart to prove it: 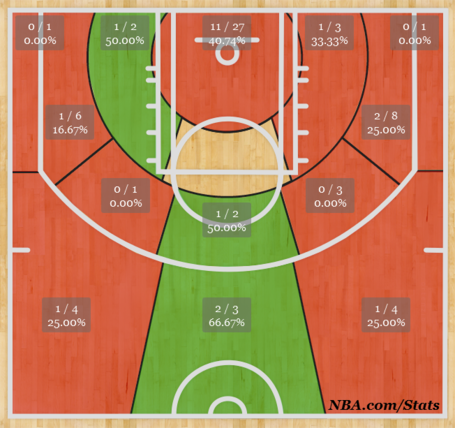 Will Valanciunas get playing time?

As many have already noted, Jonas Valanciunas has been getting surprisingly little time so far this season. He was the Raptors' best player against Miami, but only saw 27 minutes of action and sat out for most of the critical fourth quarter.

Dwane Casey is obviously wary of playing Valanciunas when other teams go small, but I think he's over thinking things here. Valanciunas is almost always productive when he plays and it should be a priority to get him as much playing time as possible. Finally, what reasonable alternatives are there? While Valanciunas sat last night against Miami, Casey played Tyler Hansbrough against Udonis Haslem. You're telling me Valanciunas couldn't handle Haslem?

Per 36 minutes, Valanciunas is averaging a 14-11 with two blocks. Outside of foul trouble, he should be approaching that 36 minute mark every night. Fortunately, Charlotte plays a traditional big (Bismack Biyombo) in the middle, meaning Valanciunas should get all the time he can handle.

I wrote about the bench situation before the season started, and these four games have done nothing to convince me the second unit is anything but awful. D.J. Augustin is making me pine for the days of Milt Palacio and, outside of Landry Fields, Terrence Ross and sometimes Hansbrough, there aren't many NBA-level players coming off the bench.

It's a problem that I don't see being fixed anytime soon. Casey might have to embrace a Tom Thibodeau-style philosophy and run his starters into the ground; otherwise, the losses might start to pile up. On the other hand, maybe that's a good thing? What a confusing season already.