The Erratic Evolution of DeMar DeRozan

DeMar DeRozan showed some nice signs of improvement in preseason, only to struggle in the Raptors' first regular season contest. The HQ's Mohamed Mohamed takes a look at DeRozan's play on both sides of the ball career-to-date, and what he needs to do to take that proverbial "next step."

Share All sharing options for: The Erratic Evolution of DeMar DeRozan

DeMar DeRozan is heading into his fifth season with as much optimism as ever. Shooting 54% from the field in the pre-season while displaying an improved defensive acumen (words I thought I would never associate with DeMar) has brought hope and a bigger spotlight on the fifth-year guard from USC.

It's been a interesting yet frustrating career for DeRozan in the eyes of Raptors fans. He and Rudy Gay have become the poster boys for the inefficient gunner in an era where players like Chase Budinger and James Harden are celebrated for being Sabermetrics dreams. DeRozan has never cracked a PER at league average, a frightening proposition considering his USG% relative to his PER is ugly: 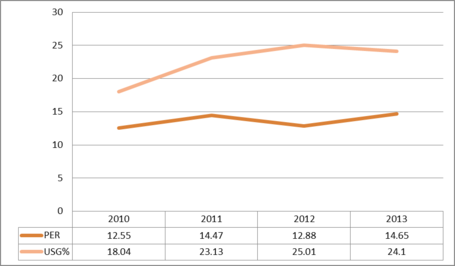 Over the last two yrs, 56 players have attained a USG% of at least 24.0.DeMar DeRozan ranked 51st in PER, 35th in True Shooting Percentage (TS%), 36th in Win Score (WS) and 33rd in Offensive Win Score (OWS). Since 2010-11 when DeMar, in the wake of Bosh's exit from Toronto, upped his USG% over the 20.0% threshold, DeMar ranked 70th in PER, 51st in TS%, 44th in WS and 41st in OWS. These are middling results and potentially worrisome trends for a shooting guard who's making nearly $10 million dollars over the next four years.

This has been a common trend with DeMar his entire career with the Raptors so far. The Raptors have (last year excluded) been a much better defensive club with him on the bench than on the court on account of his at times, brutal defensive work on the ball, which makes the "DeMar is finally getting it defensively" narrative early in this current season, even more interesting. He's looked improved on D, with Coach Casey lauding his improved awareness and urgency on that side of the ball.

DeMar has never been a player who's lacked effort on that side of the ball in the same way that say Mr. BOOGIE! Cousins has in Sacramento. DeMar tries on that end of the court, and that's a part of the battle. But it sadly doesn't hide the deficiencies he has on D, and doesn't excuse his at times murdering of the Raptors with his penchant ball watching and cheating on three-point shooters (sound familiar to you?): 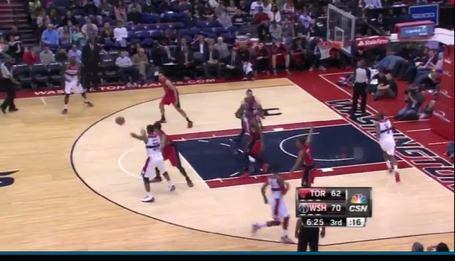 Kyle Lowry at this point is screaming that the Wizards' Bradley Beal is running the baseline free as for some reason, DeRozan decides to guard Trevor Booker at the elbow (BTW, Trevor Booker last year shot 35.0% from 16-23 feet on 0.9 attempts per game...)

It leads to frantic madness by the Raps trying to reset their defence on the fly, which ends up in a certain person (Bradley Beal) being open on the wing: 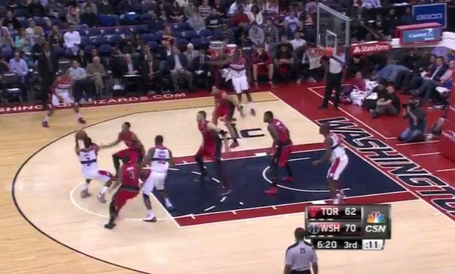 You don't need me to tell you what happened next right?

Plays like this were common for DeRozan and many of the Raptors last year. DeRozan ranked 273rd in Spot up defence giving up 1.05 points per possession (PPP) per Synergy Sports, with 40.7 % of those possessions resulting in points. For the most part, plays like this were a result of a combination of a lack of awareness, and over helping instincts: 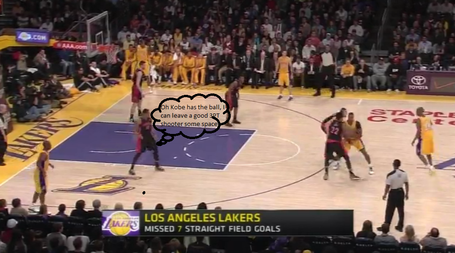 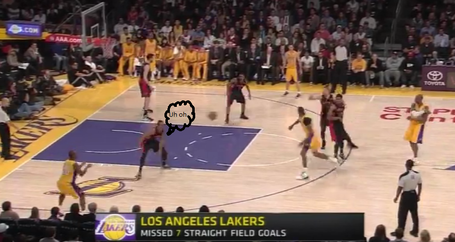 This next one will be the last and maybe the most egregious of the three selected. Notice how DeMar gives no attention to the Suns' Jared Dudley in this play, and is solely focused on a potential Dragic/Gortat PnR: 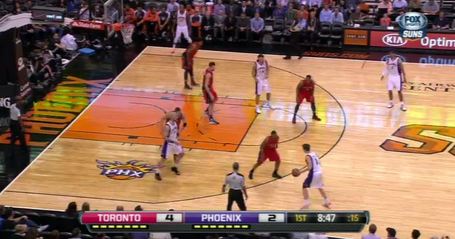 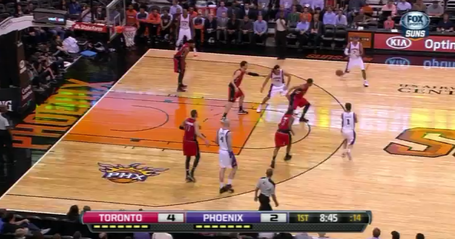 This is the only one that didn't result in a bucket but is still irresponsible regardless. It's one thing if that was say a Michael Kidd-Gilchrist on the wing, but that's Jared Dudley, a more than capable three-point shooter who shot 39% from 3 last year and over 38% on wing three-pointers from that spot.

These habits can be fixed and from all accounts during pre-season, progress was made on this front. Eliminating these habits would go a long way towards league-average defensive metrics for DeMar, and would certainly be a boost for Dwane Casey's overall team D.

What about in isolation though, how does DeMar's defence rank?

From the graph below you can see that he's not exactly elite in this category either, failing to break the league's top 100 isolation defenders in terms of points per possession: 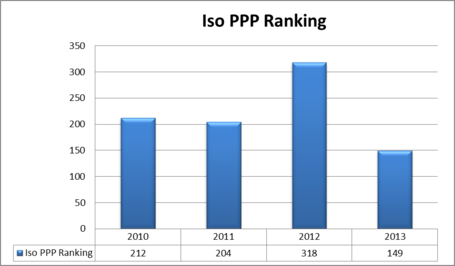 Interestingly, DeMar's problems in isolation situations on D are nearly the polar opposite of what we discussed above; DeRozan doesn't ball watch, and in fact his overly aggressive defence tends to land him flat footed, as he's not the most laterally quick player in the league.

The culmination of both defensive issues can look like this:

No one guarding the rim + lack of lateral quickness = DANGER!!!!!

Present day DeMar isn't nearly as uptight on opposing players defensively which could be a by-product of numerous things (increased offensive workload, smart tactical change etc...) but doesn't entirely solve his problems. He still can be blown by on defence and his defensive stance on a number of possessions is too far upright, allowing his assignment to have a field day and pick which side with which to attack him on.

In pick-and-roll situations, DeMar is aided by Casey's philosophy to have his big man hedge. Guys like Amir Johnson and Jonas Valanciunas do a good job of not giving much space for the opponent to turn the corner on D, allowing DeMar to not have to be pin point in staying attached to their hips. Opponents initiating the pick-and-roll turned over the ball 20% of the time, a similar metric as other Raptors' wings like Fields and Terrence Ross yielded. Ross has the potential to become a vaunted "3 and D" player in fact, due to his superior footwork, solid length, and excellent athleticism.

You've noticed that we haven't talked DeRozan's offence for a while and well, I'm not sure there's a ton that hasn't already been discussed. DeRozan takes a load of 16 to 23 foot shots, the most inefficient shot to take in the NBA. According to Hoopdata, DeMar was second in the NBA in 16-23 foot shots last year in fact, at 5.8 per game. He was slightly above the league average on those shots though, so it's not all doom and gloom. A very high amount of those mid-range jumpers came from off-screen situations, with a number of them coming via a double screen via the baseline, a play us Raptors' fans are quite familiar with: 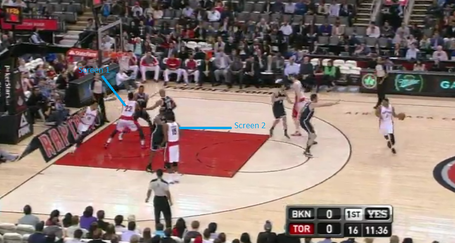 One of Rudy Gay's gifts offensively, surprisingly enough, is his ability to set screens in off the ball situations, a vital part of this play as it gives DeMar ample time to come off screen number 2 and Amir and launch a jumper: 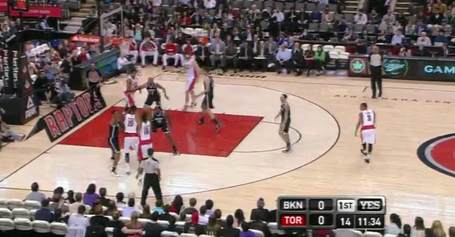 DeRozan shot 43.97% from the left side inside the arc last year, a vastly higher number than from the right side, and the highest percentage of his career so far. You'll never confuse DeRozan's movements off the ball with Ray Allen, but they're simple and effective. The Raps even go the extreme and get three guys to screen DeRozan.  You can see some of this play develop here with the point guard giving the first of three screens, followed by a dribble interchange between the PG and the other big:

Dwayne Casey gets a lot of flack for having too simplistic of an offence, and while plays like that are pretty simplistic in its nature, it's effective in redistributing DeMar's mid range jumper to the left side of the court where he's a real threat.

Outside of this movement game though, there's not much individual creation in isolation in terms of plays driving to the hoop, and while we'll give the obligatory mention to DeRozan's passing...yes, he barely does that. A number of his possessions do end up with DeMar either taking horrific jumpers or travels in isolations. He'll make the correct pass when the situation calls for it but that's the only thing positive I can say on that subject.

However his free-throw to field goal attempt ratio is very good at 0.35, way above the 0.248 league average for guards according to Hoopdata. It's a very healthy number that helps mask some of the other inefficiencies in DeMar's game. His post game has been coming along too over the last couple of years though in today's NBA, post shots would have a "meh" rating if we ranked shots by efficiency.

That's not to say he shouldn't take advantage of mismatches, using his improved strength and of course, athleticism.  But with Rudy Gay having a superior set of post skills, it's hard for both to operate in this manner at the same time.

DeMar DeRozan at this point and time is a league average shooting guard, something that's not going to fly with the price tag he has courtesy of Bryan Colangelo. His defence will probably never be elite but removing the ball watching habits and continually improving on his isolation work will go a long way in resolving some of the issues he faces.

The offensive production needs to improve as well and he's got a ways to go before removing the tag of "inefficient gunner". (Especially considering his opening night performance didn't do much to believe pre-season was for real.) His passing will never be confused for artistry, but adding an improved three-point shot would open lanes upon lanes for not only him, but the team in general. He's 24 yrs old, around the time where young players begin to truly distinguish themselves in the NBA if they're headed for a higher echelon of play. This Raptors team can go a number of ways direction wise this season, and an improved DeRozan could be a key either way, either as a building block for the future, or a nice trade asset down the road.