With the season upon us, RaptorsHQ takes a look at what's in store for the Raptors this season.

1. What Significant Moves were made during the off-season? 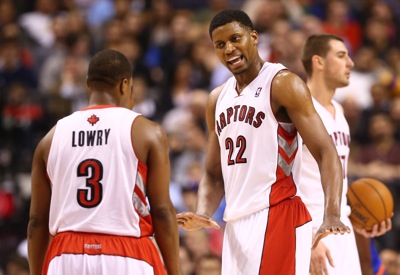 The biggest move the Raptors made as an organization came prior to the draft and the free agency period. It didn't involve any addition or subtraction to the roster, but rather it represents a significant change of guard in the Raptors front office.

The move I am referring to is the hiring of the reigning Executive of the Year, Masai Ujiri as the team's new general manager. With Ujiri on board, patience has become the name of the game. That is in stark contrast with his predecessor whose propensity to look for the quick fix in almost every situation possible has led to years of struggle in Toronto.

In Ujri's first major move of the offseason -- perhaps his only major move thus far -- he traded one of the NBA's biggest enigmas in Andrea Bargnani to New York in exchange for a surprising haul that included sharpshooter Steve Novak, a first-round pick and two second-round picks.

Otherwise, Ujiri has since exercised that ever-important patience by simply adding depth to the bench in favor of attempting a major overhaul of the roster.

2. What are the team's biggest strengths?

The size and athleticism that the Raptors possess in their starting lineup is something that fans have not seen since the days of Vince Carter and Tracy McGrady.

The combination of Kyle Lowry, DeMar DeRozan and Rudy Gay on the wings should put a great deal of pressure on opposing perimeter players while also proving to be lethal in transition. In the paint, both Amir Johnson and Jonas Valanciunas are high energy and active defenders as well as effective rebounders.

Offensively, this core presents a well-balanced attack. Though Gay and DeRozan will need to expand their shooting range (more on that below) their ability to get to the rim and draw fouls make them both dangerous players in the half court. Lowry has also proven adept at attacking the basket and is even more deadly when you consider his ability to knock down the three-point shot. Valanciunas' newly-developed post game was on full display in Vegas this summer and will be an excellent compliment to the other four starters.

These are all reasons why this group of players finished in the top five in the league in point differential last season. Having additional time together this year should yield more of the same result.

More: All of SB Nation's NBA previews to date

3. What are the team's biggest weaknesses?

Three-point shooting was a huge issue for the Raptors last season. They were 26th in the league at 34% shooting from beyond the arc. Ujiri went out and got a couple of quality shooters in Novak and D.J Augustin, but for the most part, improvement in this area is going to have to come from someone in the starting lineup.

That means the trio of Lowry, Gay and DeRozan are going to have to really step up their game from downtown. Of the three, Lowry is the most capable, and both Gay and DeRozan have talked at length about the work they put in to improve their shooting this offseason, yet the long-range shot remains Toronto's Achilles heel.

Likewise, the bench may also be a bit of a problem. On paper it's stronger than a season ago. The additions of the aforementioned Augustin and Dwight Buycks are a big improvement over John Lucas at the point guard position and Novak, Austin Daye and Tyler Hansbrough add depth at the forward positions.

Despite the added help, Toronto still lacks significant punch off of the pine. They are going to need bounce back seasons out of Landry Fields and Terrence Ross or they are going to continue to be a team that gives away leads once coach Dwayne Casey goes to his bench.

4. What are the goals for this team?

I think there is really only one goal for the team and it's a simple one: make the playoffs.

The Raptors have not sniffed the postseason in five years and with the new rebrand that CEO Tim Leiweke is spearheading, there is nothing this organization needs more than for this team to be competitive.

5. What will Ujiri do with this roster?

This is a question that has been asked of Ujiri since day one. Unlike Bryan Colangleo, Ujiri has opted to take his time and evaluate the roster in front of him rather than simply reacting and tearing the team apart from the get-go.

There were some that expected moves right away. But, when you look at the roster as it is currently comprised, its difficult to see what exactly the movable pieces are.

At this point Valanciunas would seem to be the player with the most value on the team -- a fact that makes him as close to untouchable as possible.

On the flip side, both Gay and DeRozan are certain to have some value, yet not as much as they should given the price tags that are attached to them. Kyle Lowry is coming off of another injury-plagued season in which he failed to live up to expectations and is on the final year of his contract.

In short -- Ujiri doesn't have a great deal to work with and thus his approach of wait and see looks to be the correct one.

Exactly how long will he wait?

Honestly I have no answer to this question. The roster in place has enough talent on it to finish as high as sixth in the East or, just as easily, they could finish in the lottery once again.

I would hazard a guess that if the Raptors get out to a slow start we could see this question answered much sooner than later with Gay and DeRozan being the players shopped most heavily.

Ultimately, this is going to be one of the most fascinating storylines to follow. Ujiri, armed with a long-term contract, is going to do whatever he sees most beneficial for this team in the long term. Whether or not that means sacrificing some short-term success remains to be seen.