Can the Raptors Return to Being a Solid Defensive Team?

We continue our series of pres-season questions as we examine the Toronto Raptors' defensive performance, and wonder if they can bounce back after a tough showing last season.

Share All sharing options for: Can the Raptors Return to Being a Solid Defensive Team?

That's not good obviously, and a far cry from their 11th place showing in the lockout shortened season before that.

Unfortunately, a common trend in the past five years for this franchise has been horrific defence, something that can be seen via the table below from Basketball Reference.com, listing the Dinos' historical defensive efficiency rankings.

Dwane Casey was brought in to right the ship defensively but we all know how this went, and it can be seen from the stats above.  In the 2011-12 season things worked out but last year, the bottom fell out of the boat once again.

During the 2011-12 season, Coach Casey implemented a defence that called for lots of hedging on pick-and-rolls, resulting in an opponents' Points Per Possession (PPP) mark of 0.95, an improvement from their 2010-11 showing when the Raps posted an opponents' PPP mark of 1.09 (27th in the NBA.)  The club didn't gamble on steals, clogged the paint, and Casey got the club's crew of historically inept defenders to actually get stops.  Andrea Bargnani might have been the biggest recipient of the Casey treatment in fact as he tied his career high Defensive Rating mark of 106 while posting his highest Defensive Rebounding Percentage ever at 16.6% (yes I know, these numbers are still bad). In prior years, "The Artist formerly known as Jay Triano," you may recall, had Bargnani hanging around the free throw line on D: 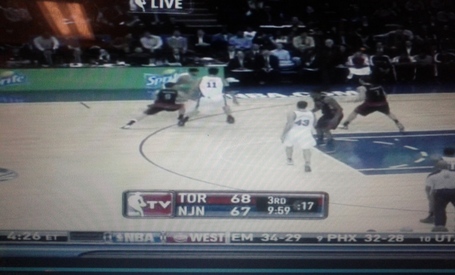 Casey however used Bargnani much more in breaking up pick and rolls, Bargs' mobility being an asset against other big men.  Perhaps Casey knew that while Bargs was never going to be much of a weak-side defender, his size and quickness could still be an asset when used in the proper system: 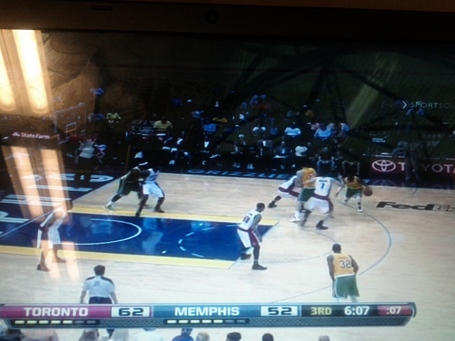 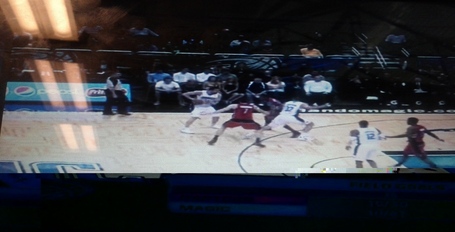 Casey's plan for Andrea didn't come without its drawbacks however. Teams were able to split on the pick-and-roll and take advantage of Bargnani's sometimes awkward tracking of defenders (we can all probably still see images of him stuck in no-man's land, desperately hurtling towards the man he lost hoping to block an open jumper.) However this was still a better alternative to the sagging approach employed by Triano. Lineups with Andrea defensively were good in 2011-2012, particularly the Andrea/Amir Johnson two-man combo which produced a 97.8 Defensive Rating in the 509 minutes they shared on the court together, an outstanding number considering we're talking about Andrea Bargnani.

Again, last year however the club regressed defensively and considering the team's offence was hardly the Miami Heat, it's no surprise the team failed to win 35 games.  .

One of the main reasons for the Raptors' defensive problems defensively was ball watching. BALL WATCHING!!!!!!! If BALL WATCHING!!!! was an art, the Raps were the Mozart of their time. [1]. Think back and you can likely remember a number of examples where opponents swung the ball around the perimeter, finding an open shooter, while Toronto just sort of said "oh, that's nice."

Everyone on the team was guilty at times of doing this, even Amir Johnson, and it was a team-wide problem.  The Raps finished 17th in Spot Up defence, a far cry from their 2nd place showing in 2011-12, which speaks volumes about the ball-watching situation. Rotations and player awareness was seriously lacking from Toronto on many occasions last year, and you can single out almost everyone from Kyle Lowry (who also loved gambling for steals), to Rudy Gay: 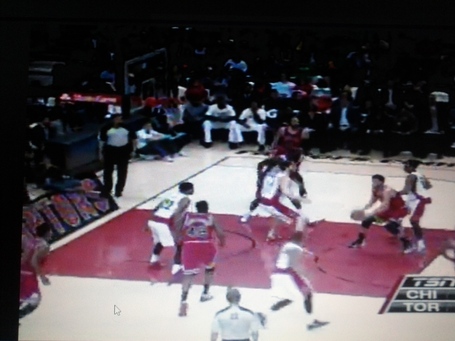 (Uh I don't want to be Buzz Killington here, but JIMMY BUTLER IS IN THE CORNER! I REPEAT! THIS IS NOT A DRILL!) 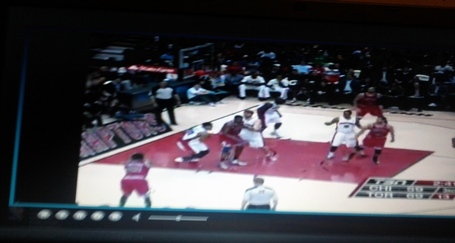 (Too Late, There's JIMMY! in the corner wide open)!

Unfortunately Gay was one of the bigger "ball watching" offenders last season and the next few images capture this quite well.

Instances like that were a major part in Rudy Gay being a below average off the ball defender, with  Rudy Gay ranking 119th in Spot Up defence. If Toronto wants to play more small ball and feature Rudy Gay at the 4 this season, this can't happen at all and Rudy Gay has to improve his off the ball awareness[2].

So here's the big quesiton.

Can the Raptors' return to being a solid defensive team this year?

I think the answer is yes, at least in terms of being at the league average on that side of the court.

They certainly have the pieces.

The lineup of Rudy Gay, DeMar DeRozan, Amir Johnson, Jonas Valanciunas and Kyle Lowry produced a Defensive Rating of 92.5, a fairly remarkable number. Toronto's two-man combo featuring Amir and JV produced a 96.9 Defensive Rating and combos featuring any two from the starting five produced solid results as well. Amir Johnson and Kyle Lowry are terrific pick-and-roll defenders, particularly with their ability to hedge in unison. Valanciunas has potential to be one of the best defensive centers in the NBA thanks to his combination of timing, mobility, size and athleticism, while Rudy Gay, warts and all, is still a solid defender.

DeRozan is the weak link here, but even then, his flaws could be masked as that five-man lineup showed last year.

The Defence in Toronto has gone through a serious reconstruction since Dwayne Casey arrived in the T-Dot, producing uneven results in the process. The additions of Tyler Hansbrough, Austin Daye, DJ Augustin and Steve Novak don't seem to give much of a defensive boost but two of those four played on a very good defensive team in Indiana last season.

Add in the defensive potential of the Terrence Ross/Landry Fields wing combo, and it will be interesting to see how this all works out.  Toronto has proven through their history that they can have very good-great defences, and with the defensive potential that the starting lineup exhibited last year, this season might just see the club return to 2011-12 performance levels at the very least.

[1]More Hip references: If BALL WATCHING!!!! was an Olympic sport, they would own the podium. The Raps Ball watched on defence more times than Kim Kardashian faked tears in Keeping up with the Kardashians.

[2] It took every fibre of my being to not insert a Rudy Gay Vision Joke. Consider this your early Christmas present