Bayless off to Grizzlies, What's Left for the Raptors?

Share All sharing options for: Bayless off to Grizzlies, What's Left for the Raptors?

With Jerryd Bayless gone and Sonny Weems seemingly off to another destination as well, the HQ takes a first look at the club's roster and potential next moves.

First off, a shout out to one of our readers, Jenge, who created this nifty little depth chart graphic to give you an idea of where the Raps currently stand roster-wise: 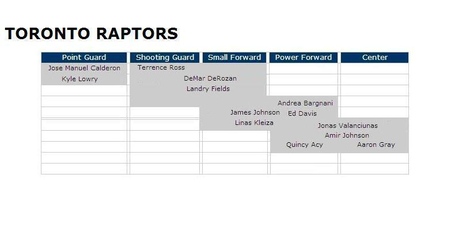 With reports that Jerryd Bayless is off to Memphis, and Sonny Weems looking like he's a goner too, the Dinosare likely sporting a roster of 13 at this point.

Based on the breakdown above, the team has pretty good coverage at most spots on the floor but there are a few obvious holes.

For starters, a third-string point guard is a must and I'm guessing if Ben Uzoh doesn't get a call-back, the Raps will grab one via Summer League. Xavier star Tu Holloway is reportedly going to be part of the Raptors' Vegas-League entry so it may in the end be him. Holloway isn't exactly a pass-first type but was one of the more well-rounded PG options in this year's draft. He averaged 18 points, five assists and four rebounds a game for Xavier last season and most impressively, got to the free-throw line an average of seven times a game, one of the best marks in his draft class.

An addition of Uzoh or Holloway (or other PG) would bring the Raps to 14 and I'm guessing that's likely where they'll stand pat. The club in the past has liked to keep one roster spot open for various reasons and with numerous players able to play multiple spots on the floor, it will likely be up to Coach Dwane Casey in terms of figuring out how best to use his current assets.

That being said, there was talk that James Johnson might not return and other players like Amir Johnson and Linas Kleiza could still be amnesty candidates if Raptors' President and GM Bryan Colangelo wants further flexibility. The Philadelphia 76ers needed three-point shooting help but the addition of Dorrell Wright (for former Raptor draft pick Edin Bavcic!!!) again potentially brings up the long-term future of Andre Iguodala there, so perhaps BC still has a few tricks up his sleeve after missing out on Steve Nash.

Other than that though, the roster looks fairly complete at present.

Of course complete doesn't mean great. At face value this still looks to me like a team that will have to fight tooth and nail for the playoffs in the Eastern Conference considering that right now, Miami, Chicago, Indiana, Boston, Philadelphia and New York all look like locks to return to the Dance, and Atlanta, and Orlando could be back too depending on various moves.

And now obviously the Brooklyn Nets appear to be headed straight for the playoffs while clubs like Washington and Milwaukee (who barely missed last year) have improved.

A lot of next season's success hinges on factors like the development of DeMar DeRozan and the impact of Jonas Valanciunas so while the roster is nearly full, I'd argue we still have a long ways to go before we've got anything close to a clear picture of how good this club can be.