The HQ got down to yesterday's pre-draft workout, but came away with a much bigger vision of the Raptors' draft process than simply an evaluation of yesterday's participants...

We were a bit light on NBA draft content yesterday and for that I apologize. The last 24 hours has been a zoo of draft activity from Q and A's with various bloggers, to phone calls with agents, to player interviews (we've got a nice piece on Robert Sacre coming up next week) to finally sneaking away from the old nine-to-five job to take in some of the pre-draft activities going on currently at the Air Canada Centre.

We've got lots of content as a result though with the goal of ensuring our readers have all the facts before the big day on June 28.

Yep, it's hard to believe but the NBA Draft is less than two weeks away.

It seems like yesterday when we were all rooting for losses in hopes that the Dinos would come away with if not Anthony Davis, than a top three pick in the draft.

In fact the one thing that stood out the most to me from yesterday's session wasn't any particular player's performance, but Stefanski alluding to the fact that they had pretty much seen everyone they want to, with one more big workout scheduled for next week. Rumour is that it will be on Thursday, and will feature various big men options, all likely in the lottery range. Word is that one of John Henson or Tyler Zeller will be in attendance and as for the rest of the list, well, I'd say names like Jared Sullinger, Perry Jones III, Meyers Leonard and Terence Jones are all distinct possibilities.

But going back to the vibe I got from Stefanski regarding the team's preparedness, I couldn't help but think that the Raptors pretty much have their final draft list made up, and now they're simply fine tuning things. If I had to guess, I'd say Harrison Barnes is at the top on the slight hope he falls to them, and then after that the order goes Damian Lillard, Dion Waiters, Jeremy Lamb and Austin Rivers.

Acy was the standout in the work-out and the slightly blurry image below gives you an idea of what transpired in the three on three sessions; dunk city. With no point guards as part of the session, it was a fairly physical affair with all six players aggressively attacking the rim. Acy in particular tried to dunk everything within striking distance of the rim. He's got a great motor combined with good size and athleticism, and on those traits alone he should find a niche in the league. 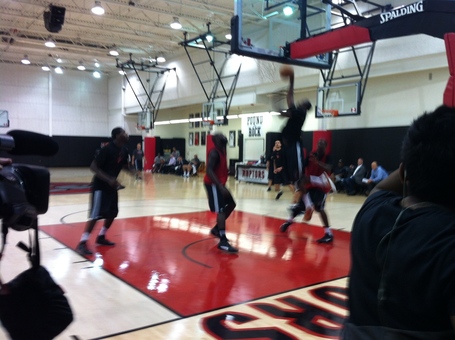 When I asked Acy who he modeled his game after he noted he grew up a huge Amar'e Stoudemire fan but currently looked at having a Reggie Evans or Kenneth Faried type impact at the next level. When I followed-up by asking if the desire to have an Evans-esque game, explained why he was rocking the Evans-esque beard, he denied it emphasizing that the facial hair situation was something he'd been working on since he was 13. 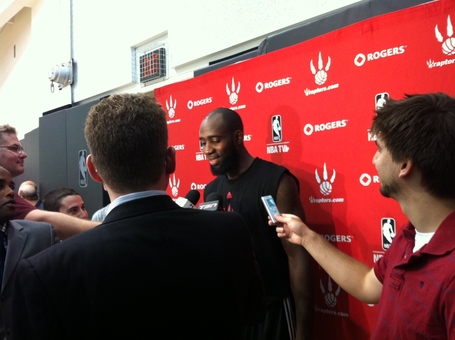 The other player that stood out for me was Green, who while not as much of a springboard as Acy, displayed a more polished low-post game, and the ability to face up and hit the mid-range J. That's something I saw lots of watching him in SEC action over his career, and you can see why he's drawn comparisons to current NBAers like Brandon Bass. I talked to him about this and a variety of other topics after the work-out, and we should have the full video of that chat up later today or tomorrow.

The work-out session that was scheduled for today has been cancelled so that does it for this week, but again, it sounds like there will be one or two more sessions the following week. I'd still love for the Raps to bring in a number of guys for a closer look, but it's encouraging to see the variety of players they've already had in, and potentially those who haven't worked out at the ACC, the Raptors already have a pretty good idea of.

One final note. Some of the current Raptors were in the house again yesterday, namely DeMar DeRozan and Jerryd Bayless. It's encouraging to see Bayless sticking around TO and working out with the staff, and apparently even giving a bit of input into the draft process!

I don't think we can expect Jerryd to be a GM any time soon though.

Stefanski was quick to note that while players like Bayless and DeRozan had chimed in a bit on the workouts, they were sure to let Raptors' management do their thing.