On Monday and Tuesday of this week we offered up our own version of player grades for the participants in the 2011-12 Toronto Raptors' season.

But we didn't QUITE get everybody.

Yes, we touched on every player who left some major impact on the club, but what of the coach, management and...the Dance Pak?

They're not getting off so easy.

This is a pretty easy one. Spouting off the various statistical improvements the team made on defense last year is enough to warrant the "he'll live to fight another day" mark, but add on the visible impacts he had concerning the club's chemistry and culture and you've got an extra thumbs up.

Bottom Line? Casey was so effective this season that by blowing away expectations, he may have ironically cost the club a higher draft position. You can hardly fault him for that as indeed, he was brought in to turn the club around, and the hope is that his impact is only magnified next season when he focuses more on O, and has some real blue-chip talent to work with.

This was the first year since...well, year one in the reign of BC that Colangelo and co. would get a "thumbs up" from me. I was a huge advocate of the Jonas draft move, was pleasantly surprised by his lack of free agent overtures, enjoyed the Uzoh and Anderson finds, and in a weird way, even the move I despised, the signing of Rasual Butler, ended up helping the Raps in terms of assuring a lottery position in the upcoming draft.

Bottom line? We all wait now with a certain degree of uneasy excitement in terms of this summer's moves, but from shipping Barbosa to Indy at the trade deadline, to seemingly holding guys like Bargnani and Calderon out towards the end of the season, it's hard to find much fault in BC's moves this past campaign.

When you watch as much basketball on a nightly basis as I do, you start to notice little nuances regarding in-game experiences for the club you follow, as opposed to others in the league. The three prime ones for me in this respect are NBA teams' Dance troupes, mascots, and their musical choices.

Starting with dancers, the Raps I've always felt have one of the best groups in the league. Choreography is solid, musical selections, albeit too poppy for my taste, are relevant to the viewing demographic, and the girls look like they're having fun. There's nothing worse than seeing a team just going through the motions and unfortunately, you see that from time to time with other troupes.

Bottom line? They're not the Laker Girls, but the Raptors' Dance Pak does a pretty solid job on a nightly basis. 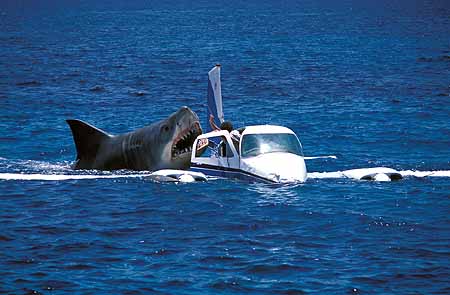 Had to go away from the Gladiator theme for this one as besides Rasual Butler's shooting, Game Opps was one of the more painful pieces of the season in my books.

From tacky games to terrible music selection during breaks, this warrants a solid thumbs down.

Bottom line? It's 2012, do we really need to hear the Venga Boys in the crucial closing minutes of a one-point game?

When he calls games for TNT, as he's been doing for this current slate of NBA playoffs, he's good, even great.

But when he's in his post as Raptors' play-by-play man?

However it's not like expectations have been that high of him since his first season. We know what we're in for each night and this season was exactly that. A lot of "no props needed" type utterances, ridiculous pop culture discussions with Jack Armstrong, and the occasional bout of crooning.

Bottom line? At times Devlin's work with the Raps nearly makes me miss The Swirsk but when you go around the league, the scary thing is you could actually do a lot worse. Devlin at least tries to sprinkle in the occasional bit of advanced insight (witness his arguments with Leo over this year's MVP race) and maybe when this team finally gets some top talent, a much more TNT'ed version of Devlin will emerge.

Like Matt Devlin, at this point Raptors' fans know what to expect from Leo Rautins.

The problem is this year, I felt he failed to live up to even the modest expectations I had for him.

I get that he's one of the sole Canadians who can effectively play that colour-commentator role from a "name recognition and relevance" standpoint, but man was he off-base at times this year with his insight. His halftime points were often so factually incorrect that I had to turn to curling.

Bottom line? I could use a lot less of Leo next year.

He's essentially the living definition of "he is what he is," and I'm fine with the singing and random abbreviated name references ("JC!" "AB!" "Joey G!") provided he keeps up with the ornery rants that run counter to the usual "pro-Raptors no matter what" hype that we're constantly spoon-fed as viewers.

Bottom line? Jack did seem a bit more out of touch this year, especially in terms of use of advanced stats, but he did go off on a few solid tangents regarding the team, and the NBA in general, that pulled things back to the middle for me. And again like Matt, I'd love to see him refocused and discussing a winning team for once.

The man covers every sport on Canadian television and has a mustache.

One of the saving graces of the Toronto in-game experience now that Mop Girl is gone.

This final category could go a number ways.

Either you look at Toronto's average of 16,835 fans a game this season, 17th best in the league and think, "wow, that's really fallen off."

You think "this team still averaged THAT many fans despite winning 23 games!" "The Hawks and Pistons averaged about 2000 less a contest and won more!"

I'm going with the latter, hence the "thumbs up" vote.

Bottom line? There's a reason NBA.com's David Aldridge recently made a plea for the Raptors' return to relevance. The team has some of the best and most loyal fans in the game, and they deserve a lot better for their support than the product that they've been forced to witness the past few seasons.

Wait...so in that sense, should this be a "thumbs down?"