Share All sharing options for: NBA Power Tankings - Raptors Continue to Drop in Anthony Davis Race Thanks to Upset Wins 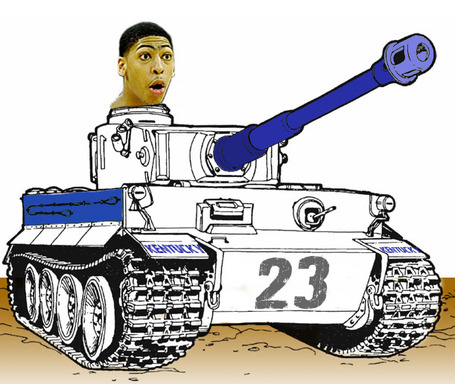 Well this isn't going as planned.

After looking like a legit top five, maybe even top four NBA Draft lottery seed, the Toronto Raptors of late have fallen on hard times.

Well, hard times in the sense that a recent surge in wins has the club over .500 so far in April, and therefore dropping in our weekly NBA Power Tankings. Toronto now finds itself tied with New Jersey for the sixth-worst overall winning percentage in the league, but based on our system, looks more likely to drop to eighth at their current rate:

(Based on Hollinger Playoff Odds from Monday, April 16.)

Things could get even worse as well since the Detroit Pistons are inches away from the eighth spot, and Toronto still has winnable games against the New Jersey Nets and these same Pistons. Meanwhile Detroit has a winnable match against the Cavs this evening, but the rest of their schedule looks about the same in terms of strength as TO.

Teams like the Cavs, Nets and Kings currently have the upper hand on the Dinos, and let's not lose sight of Golden State, a 10th seed only a couple weeks ago that is now crashing towards a top five Power Tankings finish.

The frustrating thing for Raptors fans is that the club still could have a stranglehold on a a top five spot had they lost their last two matches. With Sacramento beating Portland last night, and Cleveland beating Washington Saturday evening, the rankings could have looked quite a bit different today.