The Raps got the win, but as the HQ notes, it's hard to get too excited about beating the Wizards...

Fact: The Toronto Raptors are not a good basketball team.

Fact: The Washington Wizards are even worse.

It's these two facts that I think Raptors' fans need to keep in mind when pouring over last night's 106 to 89 win over said Washington Wizards club.

Because although the Dinos turned on the O taps last night to account for over 100 points, not to mention free pizza for fans in attendance in Toronto, I'm not sure there's a lot to get too excited about in this win.

Simply put, a bad team beat a team that was even worse, and while there were some nice individual performances, which we'll get to in a second, the clock resets itself Sunday, when the Raps turn around and face in essence the reciprocal of the Wizards, the Miami Heat.

To me this was one of those games that was going to be a W on the schedule.

Not that it was impossible for Washington to beat Toronto, in fact that already happened earlier this season. But moreso that over a large sample of games, the Toronto Raptors were going to beat the Washington Wizards, more often than not.

The Raps are simply a better team than the Wizards, although the word "better" is obviously used loosely here, considering that as noted to start this post, we're talking about two teams that should hardly be classified as "good" basketball teams.

But in last night's contest, Toronto did enough "good" things, to win the game, quite easily too I might add, by the time this one was all done.

Good things like attack a weak Wizards' interior. Toronto put up 68 points in the paint, and Washington's only answer was to come back down the floor and launch jump shots, which they hit to the tune of 38 per cent.

Good things like out-work Washington on the glass, out-rebounding the Wizards 61 to 37, including 23 to 11 in the offensive rebounding department. Again, Washington had no answer here.

And more good things like get to the free throw line 28 times.

Now the team is still struggling to make said free-throws, they hit on only 19 of those 28 attempts, but the club was averaging under 21 attempts a game coming into this one so 28 is a nice step in the right direction.

And a necessary direction I'll add.

One of the "bad things" on this night was a propensity to settle for jump shots at times, something that happened at the start of the third quarter, allowing the Wizards to get right back in the game.

But to their credit, Toronto switched things up, got back to what had been working, and never looked back en route to the win.

Dwane Casey deserves a healthy dosage of kudos here because not only did he remove DeMar DeRozan in effort to go back inside, thereby using a line-up of Linas Kleiza, Ed Davis and Amir Johnson, but he also did this to negate the plan of attack Washington had been using so successfully during that time period; post-up and attack DeMar DeRozan off the bounce.

(Sidebar - Not going to pour over DeMar's struggles once more here, but suffice to say that it's never good when the opposing team is game-planning to attack your supposed best player on D.)

In any event, back inside the Raps went, and in particular, the hustle and energy of Davis and Amir Johnson were too much for the Wizards to handle, and back to the win column Toronto went.

Fact: The Toronto Raptors are not a good basketball team.

Fact: The Washington Wizards are even worse.

But let's take it back to these two statements once more.

While it was great to see Toronto's adjustments pay off, and great to see certain players like Amir Johnson (18 points, 13 rebounds) get back on track individually, it's admittedly hard for me to recap this game and not think that had this been pretty much any other team, the end result would likely have been much different. Washington gave Toronto its best punch early in the third quarter, and when that didn't work, they folded.

Suddenly the Wiz were left with players like Nick Young firing up shots without even a glance at teammates, Jordan Crawford doing the same, and John Wall speeding towards his next turnover.

There's some talent on this Washington team, but wow do they have a ways to go. At various points last night I felt like I was watching a game at the local Y and I had a tough time believing some of the sequences that were meant to pass for offensive and defensive executions.

And again the Raptors were by no means innocent here.

There were about four straight possessions last night where after missing an inappropriate jump shot, the Raptors would rebound the ball, run the ball back down the court, and take very similar type of shots.

And back and forth we went, two lottery bound teams, fighting for an edge on the NBA relevancy scale.

The Raps won on this occasion, but games like Wednesday night's against Boston and this Sunday's against Miami I'd argue are a lot more important in terms of gauging this team's growth and development.

Last night's game was a bit like an old WWF Saturday match.

Sure the "One Man Gang" won his match.

But he was fighting Raymond Rougeau. 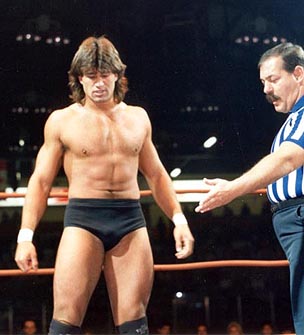