Adam Francis dives into the performance of the Toronto Raptors after the season's first 10 games noting, that minus Kyle Lowry, this just isn't a very good basketball team. 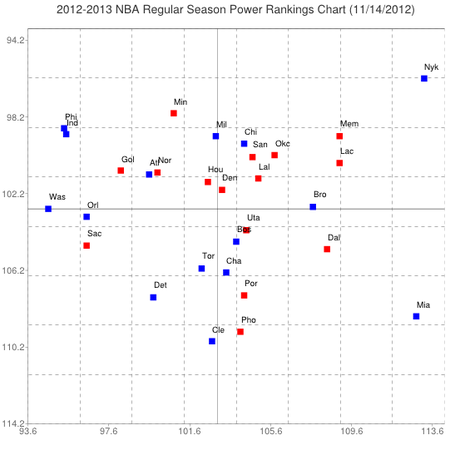 And there it is staring you right in the face.

For all the pre-season talk of playoffs and a big jump in wins this season, it's not going to happen without some major improvements.

There they are, the Toronto Raptor, in that lower left-hand quadrant of losers, hanging out in the playground with the likes of the Wizards, Cavs and Pistons.

I wrote, re-wrote, and re-wrote again, looking for a way to eloquently spell out the troubles facing the 3 and 7 Dinos, but that diagram tells the story better than anything I put to paper...er...internet; the Raps ain't playing much D, and they ain't putting the ball in the basket much either.

This was supposed to be not just a great defensive club, but an improved offensive one as well thanks to another year of experience under the belts of various key youngsters, and of course Bryan Colangelo's off-season additions.

Instead, the club through ten games looks a lot more like the Sam Mitchell teams of years gone by, decent on offense, pretty bad on D. Right now the Raps are 23rd in defensive rating, and while they're 19th on the offensive end of that scale, they're not exactly setting the NBA ablaze with their scoring.

Now the diagram above fails to take the Orlando win into account, but even with it, it's hard to think there'd be a huge shift in the landscape. To put things in perspective, the Raptors held the Magic to 86 points, but the Magic are only averaging 90 a game, fourth-worst in the league.

Oh, and they were without their second-leading scorer, and top PER man, JJ Redick for that contest.

Of course this is the point of the article where some readers are certainly screaming "but the Raptors have been without Kyle Lowry for most of these first 10 games!"

Toronto has been short-handed for the bulk of the early season and with Lowry, yes, I'm confident we'd be painting a brighter picture of essentially the first eighth of the season.

But in many ways, I'm glad Lowry's missed some time.

Because without him, the curtain has been torn back on frankly, what is a fairly poor basketball team one that's pretty clearly going to struggle to win games. Outside of DeMar DeRozan, who's actually been a very pleasant surprise to this HQ member, there's not a single consistent offensive threat, and therefore every game seems like a major challenge, in terms of scoring the basketball.

That secondary (or frankly, primary option considering his playing time and usage rate) should be Andrea Bargnani, but he's been awful.

Bargnani has simply been the same player he's always been; an inefficient 7-footer who fails to put in consistent effort at either end of the court, rebound the basketball, create mismatches on O, or play much in terms of help defense.

Seriously, shame on us for expecting anything different.

And if you're looking at third and fourth scoring options suddenly you need either Jose Calderon to morph into Chris Paul, or Linas Kleiza to hit more than 40 per cent of his shots (his FG average essentially the last two seasons.)

There's just not much offensive talent there. If more than two of the aforementioned quarter are struggling, suddenly if you're Dwane Casey, you're hoping Dominic McGuire comes in and plays outside of his specialist role.

Much was made about the club's depth to start the season but I think that was quite overblown. This isn't the Clippers, who can bring in Jamal Crawford to light you up for 30 off the pine. Or have Eric Bledsoe (aka mini LeBron, in a "do-it-all" role. The Raptors have a ton of one-dimensional guys like Ed Davis and John Lucas III, are are very good in one particular field, but need the right collection of complementary players around them to optimize their talents.

So suddenly if DeRozan, Bargs and Calderon aren't going early, Dwane Casey is stuck trying to make a scorer out of an Amir Johnson or hoping for Linas Kleiza to heat up.

It's certainly not ideal.

And I think that's why he continues to roll out Bargs despite his struggles. Andrea is still the most formidable offensive weapon this team has and Casey is almost forced to play him when the club needs offence unless guys like DeRozan and Calderon are lighting it up.

And until Kyle Lowry returns, I fear we're going to continue to see this trend.

This brings me back to Mr. Lowry, who in many ways, might be the most important player to a Raptors' basketball club since the days of Vince Carter. Lowry sets the tone on D, and makes a number of these current Raptors a lot more valuable on O.

Jose Calderon has been his usual steady to fantastic self, but a deeper look at the numbers shows that he's simply taking advantage of what's being given to him, not necessarily creating something new. For instance the club under Lowry was playing at one of the league's faster paces, enabling the club's uber-athletic big men like Amir Johnson and Ed Davis to be a tough cover in the open court. Under Jose, the team is back into the basement pace-wise, tied for 24th in the league, and while the pick-and-roll between Jose and Amir has been a thing of beauty, some of the other numbers regarding overall offence, have declined under Calderon's watch.

The whole situation reminded me of something the Raptors' analytics guru, Alex Rucker mentioned to me over lunch recently. He noted that if you really look at the video of Jose's game, he's a bit overrated. He racks up a ton of assists because he excels at making the correct play, something in the NBA that's easier said than done, but doesn't necessarily do as good a job creating opportunities for teammates as other players. Contrast that to a Lowry who's constantly attacking the rim, moving the defence with his drives and scoring ability.

Again, this isn't meant to be a slight on Calderon. The team likely would be winless without him at this point.

Instead, it's meant to magnify the importance of Lowry's return, to again point out that minus him, we're looking at essentially the same club as last year that projected over 82 games, would have only won about 29 of those contests.

Currently the Raps are on pace for about 35 wins, but that's not factoring in schedule (one that has the team playing 10 of their next 12 matches on the road starting tonight in Philly) or other variables that would go in a proper prognostication of this sort.

The graph that I started this piece with still lays out the story in the best manner.

A team that struggles to score or defend, isn't going to be very good.

It's as simple as that, and through the first ten games of this NBA season, the Toronto Raptors unfortunately fall into both of those categories.