The defensive work is a welcome site, but as the HQ notes, it's a bit of a 180 from previous seasons...

I never really read or got into Superman when I was a kid - was always more a Spider-man and Batman fan.

But I'd here about this whole "bizarro-world" concept a lot, especially once I became a huge Seinfeld fan.

From the Wikipedia entry on the subject:

The Bizarro World (also known as Htrae) is a fictional planet in the DC comics universe. Introduced in the early 1960s, Htrae is a cube-shaped planet, home to Bizarro and his companions, all of whom were initially Bizarro versions of Superman,Lois Lane and their children. Later, other Bizarros were created to add to the population including Wonderzarro, Bizarro Flash, "the Yellow Lantern", Bizarro-Kltpzyxm and Batzarro, the World's Worst Detective.

No? Well here's a photo: 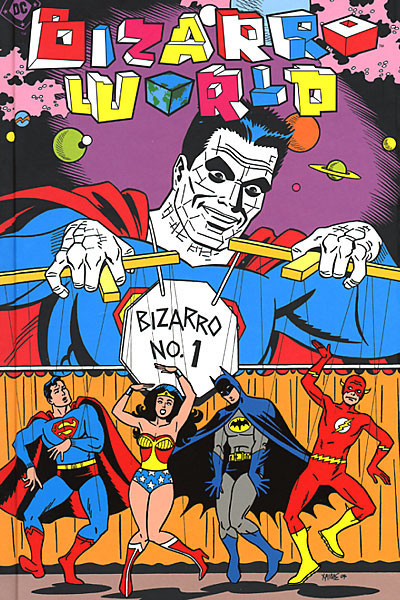 Essentially the world is the opposite though of earth, and the characters on it, well, they're opposites of Superman and the Justice League.

It's like the Toronto Raptors this season is it not?

Ok maybe DeMar DeRozan and Jose Calderon haven't been flying around the ACC in tights, but watching this team lose a 77 to 64 match last night to the Chicago Bulls made me chuckle a bit. It was as if someone had put the exact opposite team on the court of years past.

Sure, their opponents probably had 70, but now even getting to 70, especially minus Andrea Bargnani, is proving to be a not so easy task for the Dinos.

It's simple math in some ways as after Andrea, there are only a few guys on this club, capable of putting up 20+ point games. And if any of them are misfiring, like Leandro Barbosa's 7 of 20 night, then it's even tougher.

As we saw last night, Toronto's defence can only hold for so long before the offence needs to kick in too. The Raps held the Bulls to 40 per cent shooting from the field, and matched them line for line in terms of most stat categories, but a complete inability to manufacture scoring down the stretch did them in. 12 fourth quarter points just isn't going to get it done, especially against a very good Bulls team.

Eventually Derrick Rose took over, Chicago started making 3-pointers (they were 1 for 9 at the half), and guys like Taj Gibson and Luol Deng put the final nails into the coffin with huge hustle plays in the game's final moments. The Raps launched jumper after jumper, but without Bargnani commanding double-teams, or anyone attacking the basket, you could just see the loss coming.

The free-throw shooting category was particularly bad because the Raps made ONE free-throw all night.

Oh wait though, the team only attempted seven!

It was the second time in franchise history that the club failed to score at least three points from the charity stripe, the last time? Nearly sixteen years ago on January 9, 1996.

If your jumpers aren't falling, it's pretty hard to generate much offense if you're not attacking the rim and getting to the line.

Contrast that stat to the recent Chris Bosh-led teams that made getting to the line a regular part of their attack and again, it's a bit of a Bizarro-World for Raptors' fans right now.

But in spite of Toronto's lack O, it's not as if last night's loss has the team way off track record-wise. Anecdotally, when we first saw the 2010-11 NBA schedule, my prediction was that the DInos would sport a 7 and 15 record by the end of January.

Last night's loss drops them to 4 and 9 and with only games against the Nets, and banged up Celtics and Hawks clubs looking as potential W's, I'd argue the club is on track for a pretty similar record, especially if Andrea returns.

Health is in fact suddenly a major concern as the team lost James Johnson to a sprained ankle last night as well. It doesn't sound serious, but Johnson may be out on Monday along with Bargs and Jerryd Bayless, so the shallow pool suddenly gets even more shallow. It will up to guys like DeMar and Ed Davis, both of whom were very invisible last night, as well as guys like Gary Forbes (solid work at the back-up PG spot - 5 points, 5 assists, 8 rebounds in 16 minutes) to take their games up a notch.

And that's what this season is all about though right?

As much as sporting a 7 and 15 record come Feb 1 smarts as a fan, we've argued all along that it's a necessary part of the rebuilding process.

However a break from Bizarro-World would be nice too.

There's only so many 70 point games you can take before you want to smash your hotel room lamp...