With the Raptors' pre-Draft workout number one in the books, Can Ball Ray steps into the pro arena to give his observations on the first of the four scheduled sessions at the ACC...

By June 7th most years, the Toronto Raptors are well into pre-draft workout sessions.

But a combination of factors this year, including a higher pick than they've had since 2006, has meant that the Dinos are only starting this process, and yesterday was indeed the jump-off point.

The team managed to score two full workout sessions, a morning and an afternoon run, featuring two players being bandied about as guys that the team should look into getting if available.

Now normally a pre-draft workout that featured these two would be an incredibly interesting session to take in, but unfortunately Franchise and I were left quite disappointed when all was said and done.

Well for starters, it was reported that Brandon Knight's agent did not want his ex Wildcat client working out against Walker.  This of course led to the creation of the two sessions, with Walker working out in the morning with Jacob Pullen and various other prospects, and Knight coming in separately for the afternoon run.

Second, well, even though media was granted access to the workouts, we were really limited in terms of what we were able to see.

We were only able to catch the tail end of these workout sessions, which was really only the outside shooting portions, and it seems that each year we're able to take in less and less of the live action that goes on.  Franchise correctly noted that four years ago during our first pre-draft access, often media took in the last half hour of action, and we were able to not only get an idea of how certain players fared against each other, but also capture live action shots of the ongoings.

We also in the past had many opportunities to interview players one-on-one for the site.

Scrum and shooting photos only, interviews conducted with the rest of the media, and very little in terms of anything resembling live basketball action.

With Walker in the first session, the majority of the media swarmed him, recorders and cameras in tow, and I was able to catch a bit of the warm ups and the agility testing for the bigs while Knight and Thomas shot around on the far end of the gym. 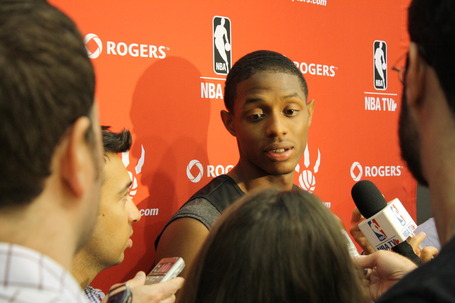 And again, in both sessions, the players were sent out once the big media scrum was over and we weren't able to grab any one on one time.

All in all, here is what I could gather from the sessions:

1) The two primary targets in the workouts, Kemba Walker and Brandon Knight, are both very media savvy kids.  Walker more so than Knight at this point, but both carried themselves quite well against an obvious media spotlight.  Both were quick with their answers and definitely looked comfortable with lights and cameras on them.  If Walker is Toronto's eventual choice at 5, as many mock draft sites seem to project, he will definitely be among the most quotable in the locker room.  Jacob Pullen and Isaiah Thomas were also equally media friendly, by the way, Thomas having an endless energy that extended off the court.

2) Kemba Walker did not shoot the ball well in the 3-point drill.  The knock on him is that his outside shot is lacking and, well, he didn't silence critics today.  Mind you, I only got to see 15 shots from three stations in about 5 minutes, so take that info with a grain of salt.

3) In contrast, Brandon Knight shot the ball extremely well from during the same 3-point drill.  In fact, we got to see Knight shoot from both a standing set shot position, and in motion, running to various spots on the floor and attempting long range bombs.  He looked equally adept at knocking down both.

4) Isaiah Thomas can flat out shoot the rock.  He might have missed three of the 30 treys he took in the drills that I saw.  This should really be a big boost to his stock as he's indeed undersized, even at the point guard position.  In the past, his lack of long-range accuracy has been a big knock on his NBA potential, height aside, but so far from the combine through team workouts he's shown how much he's improved in this area. 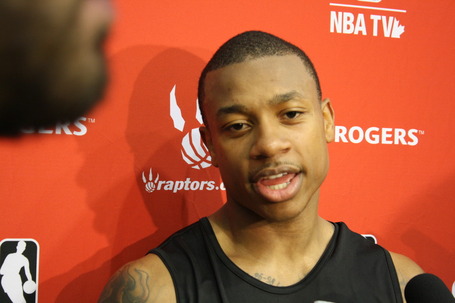 5) Ohio State's Dallas Lauderdale doesn't exactly have a pretty shot, even for a big man.  No offense to the hulking man child BUT he shoots like Shawn Marion...only slower, and on the way down from his jump.  That looks like tragedy in the making.

6) UNC's Will Graves is a very big dude!  He looks like he could be a middle linebacker but does have a three point stroke.

7) Alex Stephensen could be a player.  The former Blue Devil Tar Heel turned Trojan looks every bit his 6'9", 240 lb frame and he moves well with and without the ball.  He also did a nice job knocking down shots from various ranges.  He's a guy that I wouldn't be mad seeing in a Raps uniform come this October, or January.

8) There was nothing spectacular about the kicks these guys were rockin'.  The best pair may have to go to Graves who was wearing a pair of UNC player edition Team Jordans.  Other than that, no real exclusives.

Other than that people, there really wasn't much going on.  We will look to give you more on the coming three workouts the Raptors have planned in the coming weeks of course so stayed tuned.